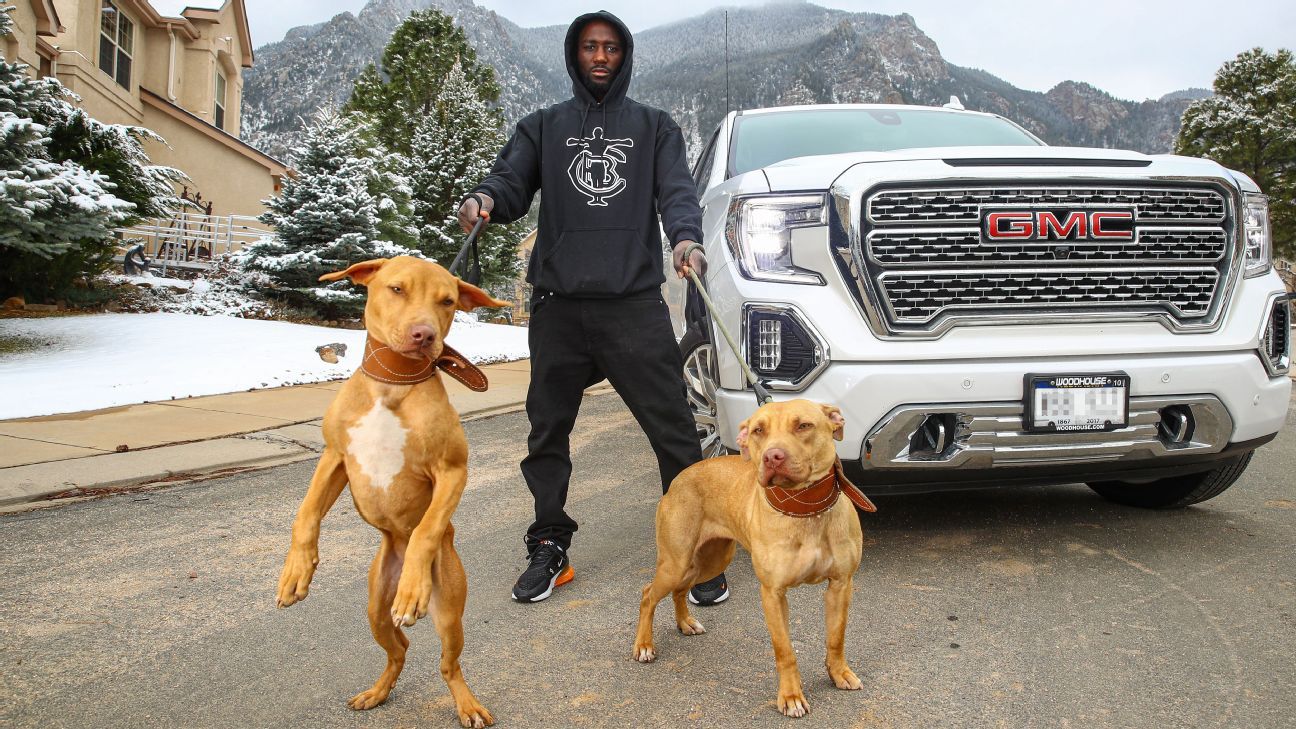 The elevator door slid open and out walked Terence Crawford. Despite being the best boxer in the world, the 5-foot-8, 147-pound Crawford does not cast an imposing figure, not in the way a hulking heavyweight might draw eyeballs. But he embodies the swagger of a prizefighter who has never been defeated as a professional, and that does not go unnoticed.

Especially not at the fighter hotel in New York City during a weekend of championship boxing.

Chico Lopez spotted Crawford from across the lobby and felt a twinge of excitement. Lopez had been around big-time pro boxers many times before, including some of the very best. He is friends with World Boxing Council president Mauricio Sulaiman and has attended major fights around the world in his honorary role as a WBC ambassador. That’s why Lopez was in New York on this day in May 2018 — to be ringside for a championship bout between Vasiliy Lomachenko and Jorge Linares at Madison Square Garden. That’s why Crawford was in town too.

“I recognized Crawford, and of course, I would love to meet him,” Lopez said. “But I wasn’t about to go over to him. I don’t go approaching people.”

It turned out he didn’t need to approach the champ. Crawford had looked his way and was walking toward Lopez. With purpose.

“He had a dog with him, and that caught my attention,” Crawford recalled. “I’m a dog lover, so if you’ve got a dog in a hotel lobby, and a pitbull at that, you know I’m coming right over to you. I’m going to say, ‘Can I touch your dog?’ because I’m respectful.”

It was a chance meeting of two people with the same passions, and they couldn’t have known how much that moment would impact their lives. It would lead to Crawford expanding his canine family and even finding a four-legged training partner, as well as a source of prefight calmness in a Madison Square Garden locker room. And it would inspire Lopez, who breeds pitbulls, to find a way to bridge his devotions to pitbulls and to boxing, pairing his favorite breed of dogs with some of his favorite athletes. That moment in a hotel lobby created ripples that continue to be felt across boxing and MMA.

“I was petting his dog while he was telling me all of this interesting stuff,” Crawford said. “The history of these dogs, what they meant in history, and what they mean today. I decided right then and there that I wanted one of his dogs.”

Fourth of July in the Crawford family’s neighborhood in Omaha, Nebraska, was a festive time in 2018. The street was closed off. The squeals of children running around and playing filled the afternoon air before eventually giving way to a nighttime of fireworks.

“What a great time it was,” said Lopez, who had traveled all the way from his home in Brazil.

The visit grew out of an exchange between the men when they reconnected by phone shortly after meeting in New York. Crawford asked Lopez to sell him one of his pitbulls. Lopez refused.

So Lopez made the trip with a 4-month-old golden puppy. He sat in Crawford’s living room with the whole family — the fighter and his partner, Alindra, their five children and Crawford’s mother, Debra. Everyone immediately fell in love with the pup, whom they named Goldie.

“I just thought that was a big, beautiful thing for this man to come all the way from Brazil to Omaha, Nebraska, to deliver me a dog, personally,” Crawford said. “That showed me a lot.”

The kids at the block party all wanted to play with the new pup that day but could barely get anywhere near her, because Crawford monopolized her time.

“He loved Goldie the moment he saw her,” Lopez said.

Crawford fell so hard for his American pitbull terrier that within a few months, he got back in touch with Lopez to say he wanted another dog. That brought Bones to the family.

“I love all of my dogs,” Crawford said. “But my parents and everybody are always saying, ‘You show favoritism to Goldie and Bones.'”

For Lopez, witnessing the powerful bond between fighter and dog triggered an idea he had considered for a while as he split time between boxing and pitbulls. There’s a connection, he came to believe, between his two passions. He loves the American pitbull terrier for its never-give-up spirit. And that’s what he sees in the greatest prizefighters too.

“Boxers are not normal humans,” Lopez said. “They do things that you and I cannot do. The will to never give up is a gift to humanity.”

Once Lopez had bridged those two parts of his life, he grew impassioned. Since bringing Goldie to Crawford for the first time a little over two years ago, Lopez has placed his pitbulls with combat sports athletes from Canelo Alvarez and boxing Hall of Famers Marco Antonio Barrera and Roy Jones Jr. to UFC Hall of Famer Royce Gracie and Bellator MMA champ Cris Cyborg.

“Chico said he was going to pick out a special dog for me, and he did,” Cyborg said. “I named her Holly, after Holly Holm.”

Cyborg shares Crawford’s obsession with pets. She maintains a separate Instagram account, Cyborg Zoo, with photos of her animals, all of which are named after fighters — including a pig named Manny Porkiao.

Lopez, who has been breeding American pitbull terriers since the 1990s, loves hearing about that deep devotion to animals. For Lopez, the mission remains the same: to place “the best American dog” in the homes of the greatest fighters in the world.

Crawford and Lopez are keeping alive a tradition of pugilists and pitbulls that dates back well over a century. John L. Sullivan, who in the 1880s was recognized as the first modern — as in, glove-wearing — heavyweight boxing champ, walked around with a pitbull. So did Jack Johnson, who in 1908 became the first African-American heavyweight champ. There are black-and-white photos of Jack Dempsey, king of heavyweights from 1917 until 1926, holding his pitbull.

Lopez filled Crawford with much of that history as the fighter doted on the pitbull on the hotel lobby floor during their first encounter. It was a tender moment with an animal whose breed is not always known for gentleness.

Dangerous, and sometimes criminal, incidents involving pitbulls and athletes date back to the days of Johnson, who was arrested in Detroit after one of his pitbulls attacked and badly injured a man. More recently, former NFL All-Pro quarterback Michael Vick served 23 months in prison from 2007 to 2009 on dogfighting charges.

But on that day in New York two years ago, Lopez told Crawford his goal for years had been to change the image of the pitbull in his own small way. Lopez told Crawford that he was breeding kinder, gentler pitbulls. At that moment, Crawford did not need to be told. He was playing with a dog that looked as fit as a fighter but had the temperament of a gentle being. Crawford wondered aloud how a dog like this would get along with his dogs at home.

“If you don’t promote aggression in your dogs,” Lopez said, “they can be together with other dogs, no problem. Having a great home is very important.”

Crawford’s bond with Goldie — as well as his other dogs — extends beyond the home. He would bring Goldie with him to prefight training camp in Colorado Springs, Colorado. One of his regular training spots is the Manitou Incline, a steep climb of some 2,700 steps. The payoff up top is an amazing view of the Rockies. But to get there takes a lot of cardio work for man or dog.

“He always brings at least one dog with him to training camp,” said Crawford’s longtime trainer, Brian McIntyre, who goes by the nickname “Bomac.” The whole team — trainers, sparring partners, everyone — would stay at a house, “and we’d all have to pitch in to keep up with the dogs. Feed them. Clean up. We’re not all dog people — not like Terence, anyway — but he’s actually made the whole team fond of dogs.”

By the time Crawford was training for his fight against Amir Khan in early 2019, Goldie had grown to the point where the dynamic of who’s pushing whom on the running trails had changed. Goldie got stronger and more used to the training regimen, and Crawford noticed that she knew when it was time for a run each day.

“It got to the point where sometimes she was pulling me along,” Crawford said. “Let’s say you’re not having a good day. You’re tired. You might want to slow down. But the dog is pulling you now. ‘C’mon! C’mon!’ She motivates me.”

The benefit of having a dog at training camp, for Crawford, is not limited to cardio work. There’s a calming effect. His trainer has seen it wash over his fighter.

“We’ll come home from the gym,” McIntyre said, “and he’ll grab the dog and go right back out for a walk. You look up and Terence is gone. He’ll be gone for a couple of hours, just him and his dog, walking in the mountains or on one of the trails near the house. It’s his time to be alone.”

This calming relationship was never more evident than when Crawford brought Bones to New York for the Khan fight. He took the dog with him to Madison Square Garden on fight night; and at one point, the champ emptied his dressing room of all trainers and cornermen, family and friends, leaving him alone with his dog.

“He was just a puppy,” Crawford said. “Having him there relaxed me, kept me loose. I ain’t never done anything like that before. It was cool having him there.”

Crawford (36-0) won’t have any of his dogs with him in Las Vegas on Saturday when he puts his WBO welterweight title on the line against Kell Brook (39-2). But there might be another addition to his family on the way.