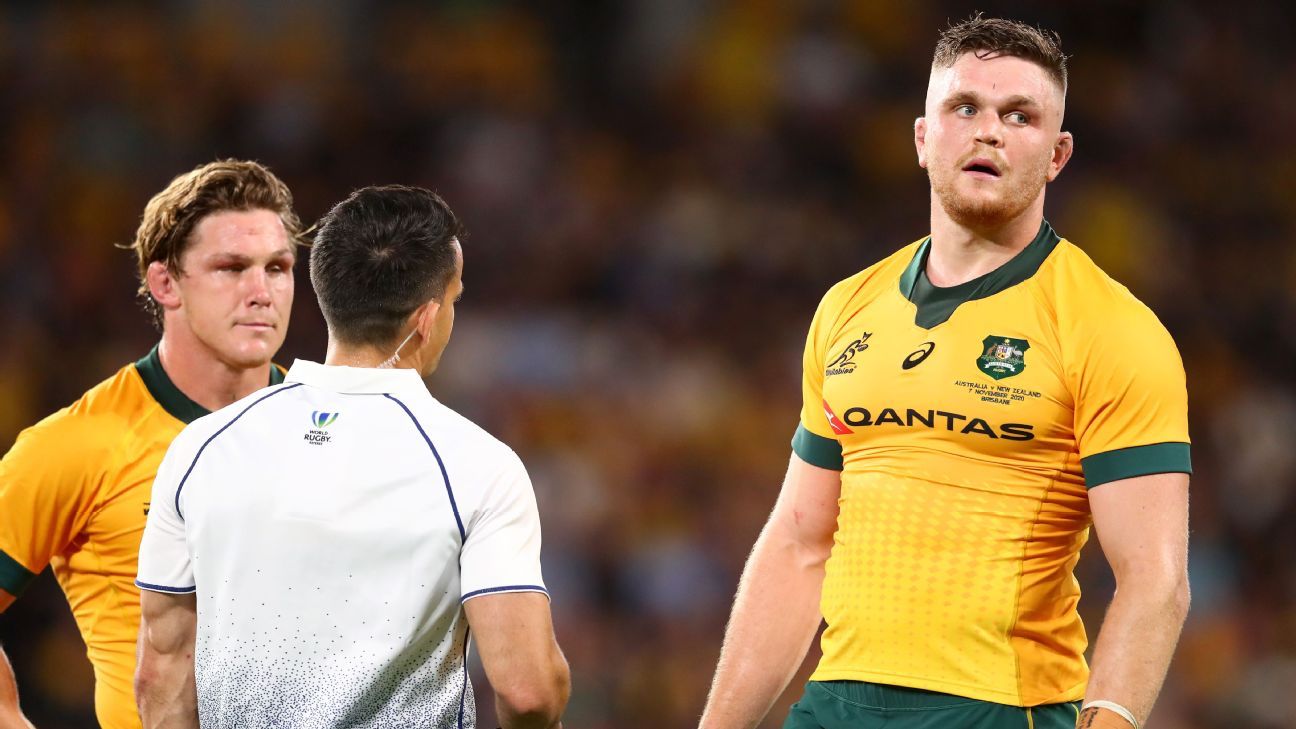 Wallabies coach Dave Rennie says he’d welcome further discussions into the use of a red card replacement law, but stressed he had no gripes with the send-off decisions handed down in Bledisloe IV.

The red cards issued to All Blacks prop Ofa Tu’ungafasi and Wallabies debutant Lachie Swinton in Brisbane last Saturday provoked a flood of discussion, particularly on social media, while also drawing the ire of commentators Sir John Kirwan and Phil Kearns, among others, in their broadcast commitments with Sky Sport and Fox Sports respectively.

But there could be few arguments with referee Nic Berry’s decisions given World Rugby’s high-tackle framework, which was first introduced in May last year ahead of the World Cup in Japan.

Reports earlier this week suggested both that World Rugby would be reviewing that framework and that New Zealand Rugby had actually put the concept of a red card replacement – which was in play in both Super Rugby Aotearoa and Super Rugby AU earlier this year – to the governing body last year, only to see it swiftly rebuffed.

Speaking from back inside Wallabies camp after a few days off, Rennie said he would be keen to investigate the red-card replacement law for various foul play issues in the modern game.

“It’s something I’d certainly be interested in looking deeper into,” he told reporters. “Sometimes people are getting red cards for contesting ball in the air and someone falling awkwardly and so on; there are so many variables in our game I think it’s worth sitting down and going through various parameters.

“I’m certainly not arguing with the decisions made on the weekend, I thought Nic Berry handled them very well, he went through a process and made his decisions.

“Under the current law, contact with the head you’re going to run the risk of being sent off and unfortunately two men did. But I think the safety aspect of our game is really important, obviously the judiciary agreed with both decisions and both guys got suspended.”

Swinton and Tu’ungafasi were earlier this week handed four- and three-week suspensions respectively, proving Berry’s decisions were indeed on the mark, despite the fact the All Blacks had made a case for “mitigating factors” in the defense of their 28-year-old prop.

It means Swinton’s Test career will be halted until next year, which is a disappointing result for the Wallabies given the promise he had shown in the 35 minutes before he was dismissed.

Rennie confirmed Swinton would remain with the squad in the short term and was excited about what he could bring to the side in 2021 with a few improvements to his game.

“He was superb for those 30-odd minutes he was on the field,” Rennie said. “His defence was a helluva lot lower, but he made an error [the high tackle] and he got punished severely for it. We’re [going to] ask that that’s an area to work on, but we don’t want to take away that edge.

“‘Accuracy’ is probably a word we’re looking at with him. He’s got lots of areas to develop in his game; he’s worked really hard around his lineout work, where I thought he was really strong, and we know he’s going to clean-out well, we know he’s going to tackle aggressively. And we like that about him.

“So a lot of its around technical excellence because he’ll be even more devastating when he’s hitting lower.”

Rennie also confirmed NRL convert Suliasi Vunivalu had joined the squad and trained on Wednesday morning, but said he would only be used against Argentina if there were a “spate of injuries”.

“It’s what he played at high school, he played a lot of rugby, and obviously got targeted to go to league,” Rennie said of Vunivalu. “He’s just been away from the game for a while, but he understands the game.

“He’s just got a lot to learn around all our structures, the role of the back three and so on; it’s just a little bit different in our game obviously. So that’s the reason for bringing in him. He’ll get a bit of time here and hopefully learn a bit, get a bit of clarity, and then get away and get into some work post-Christmas.”

The Wallabies next match is against Argentina on Nov. 21 in Newcastle.