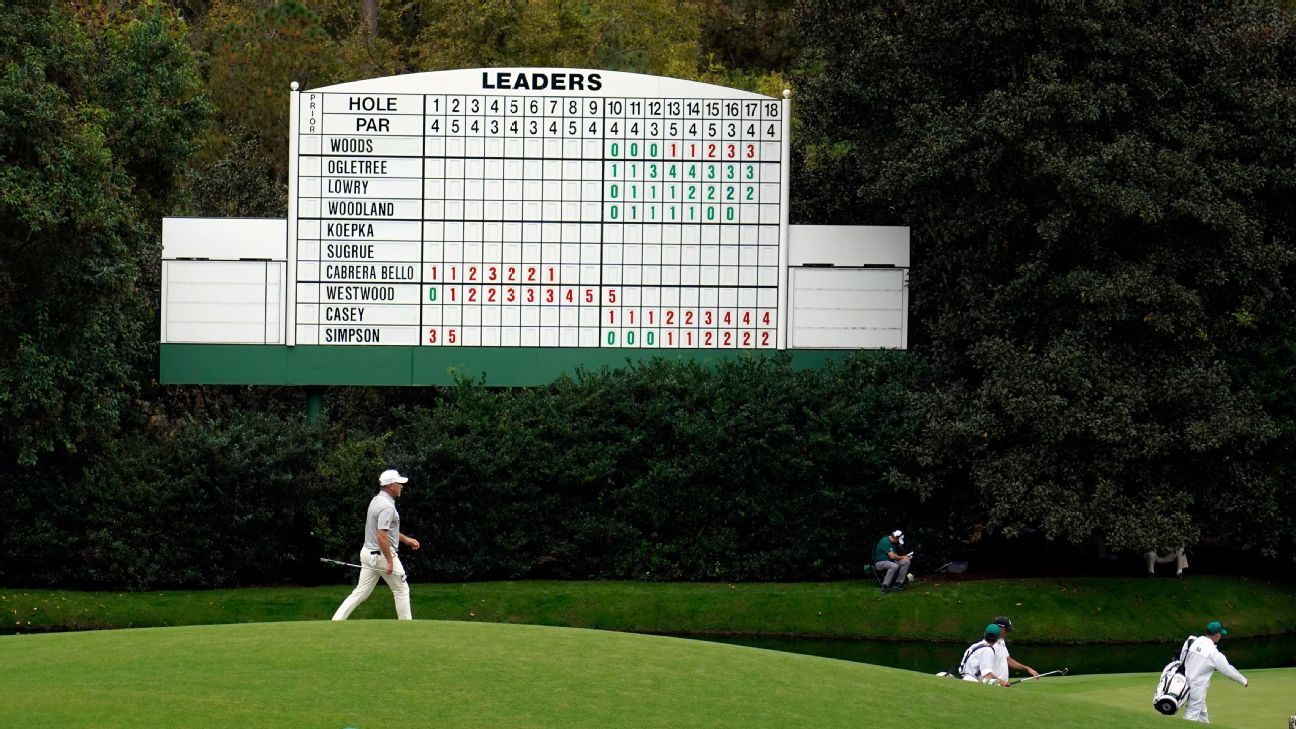 AUGUSTA, Ga. — Sure, there was a lot that felt and looked different about the first round of the first Masters ever played in November.

There were only a few hundred patrons at Augusta National Golf Club on Thursday, and most of them were presumably members, including NFL commissioner Roger Goodell, MLB commissioner Rob Manfred and Hall of Fame quarterback Peyton Manning, all of whom followed defending champion Tiger Woods.

The celebrated azaleas were green, instead of their traditional vibrant colors of April, and the hardwood-tree leaves were fall colors of orange, yellow and red.

There were no galleries or observation stands — or the accompanying roars.

“I chipped in on 1,” Webb Simpson said, “no claps. Normally, there would be a nice roar.”

Kevin Kisner, who grew up in nearby Aiken, South Carolina, said it felt like a practice round months before the actual tournament.

“It feels like you’re out here preparing for a Masters, not really playing in a Masters,” he said.

There was one other big difference in the opening round, which was delayed three hours by inclement weather.

“You know, it’s probably as easy as it’s going to play,” said Louis Oosthuizen, who had a 4-under 68 in Thursday’s first round. “I hit 4-irons to the greens where it plugged; I hit 7-wood into a green and it plugged. I don’t think we’ll ever get an opportunity to go at pins like that. Very different to what we’re used to playing.”

When play was suspended because of darkness at 5:30 p.m. ET on Thursday, 44 players were still on the course. A dozen players were within three shots of leader Paul Casey, who shot a 7-under 65.

According to research from ESPN Stats & Information, the record for most scores in the 60s in a single Masters round is 20 (Rounds 3 and 4 in 2019; Round 2 in 1995). In Thursday’s morning wave, 12 players shot in the 60s, and eight more players in the afternoon wave were already at 3 under or better through at least nine holes.

The record for the most players under par through 18 holes at Augusta National was 38 in 2009. When darkness halted play Thursday, there were 50 players at 71 or better. When play was halted, the scoring average was 71.77, which would be another Masters record for the first round.

Woods, Casey and Simpson had bogey-free opening rounds. According to Elias Sports Bureau research, the most bogey-free rounds in a single round at the Masters is four — done many times, most recently last year’s third round. The last time it happened in the opening round was 1990.

Xander Schauffele and Justin Thomas birdied their first three holes. Thomas had six birdies in his first 10 holes with eight more to play.

The rain-soaked greens invited players to fire at pins like almost never before.

“You definitely find yourself being more aggressive and attacking more flags,” said 2018 Masters champion Patrick Reed, who also posted a 68 and had eight birdies, the most of any player who finished. “If you’re on, you’re going to light the place up. But if you’re off a hair and you’re on the wrong side of some slopes, you’re still struggling to get up and down and try to make par and kind of eliminate the mistakes.”

Of course, Augusta National can change its course overnight like no other place in the world.

And if the conditions aren’t a lot more difficult Friday, the 44 players who were still on the course when play was suspended might, at least, face a mentally demanding day. They’ll finish up their opening rounds starting at 7:30 a.m. ET, with the start of the second round scheduled for 9:35 a.m. ET, barring any additional delays.

Despite everything that’s different, it was still a heck of a day.

“Listen, this is Augusta National,” Augusta native Charles Howell III said. “There are no bad days out here.”

Friday figures to be a very long one.

A year after Casey shot 81 in his opening round and missed the cut at the 2019 Masters, he shot 65 on Thursday for the early lead. The 16-shot improvement is the best year-to-year turnaround by any player in Masters history.

Michael Collins takes you to Augusta ahead of the 2020 Masters Tournament to hang with a couple legends of the game — Jack Nicklaus and Gary Player — who have a combined 9 green jackets between them. Stream now on ESPN+

“I have no idea. I don’t know,” Casey said, when asked about the improvement. “Just rubbish. But I played some decent golf in 2019 overall, just not the first round of the Masters. I don’t know why it was rubbish.”

Casey is the 15th player in Masters history to shoot 65 or better in the opening round. Only two of the previous 14 — Jordan Spieth in 2015 and Raymond Floyd in 1976 — ended up winning a green jacket.

A few of the older participants and returning champions certainly liked the friendly conditions Thursday. The 1987 Masters champion, 62-year-old Larry Mize, shot 2-under 70. He had six birdies and was briefly on the leaderboard.

“I did happen to see that,” Mize said. “Wow, that’s kind of cool. I’d like to be there more often. It’s always fun to see your name up on the leaderboard here. I’m sorry I couldn’t keep it. But it was nice to come back and finish really well on the back nine. I played really solid coming in and really felt good.”

The oldest player to make the cut at the Masters is 63-year-old Tommy Aaron in 2000.

Mize wasn’t the only more seasoned player to post a good number in the opening round. England’s Lee Westwood, 47, who is seeking his first major title in his 84th start, was tied for fifth at 4 under. Germany’s Bernhard Langer, 63, a two-time Masters champion, was 3 under through 10 holes before play was suspended. And three-time Masters winner Phil Mickelson, 50, was 1 under through 11 holes.