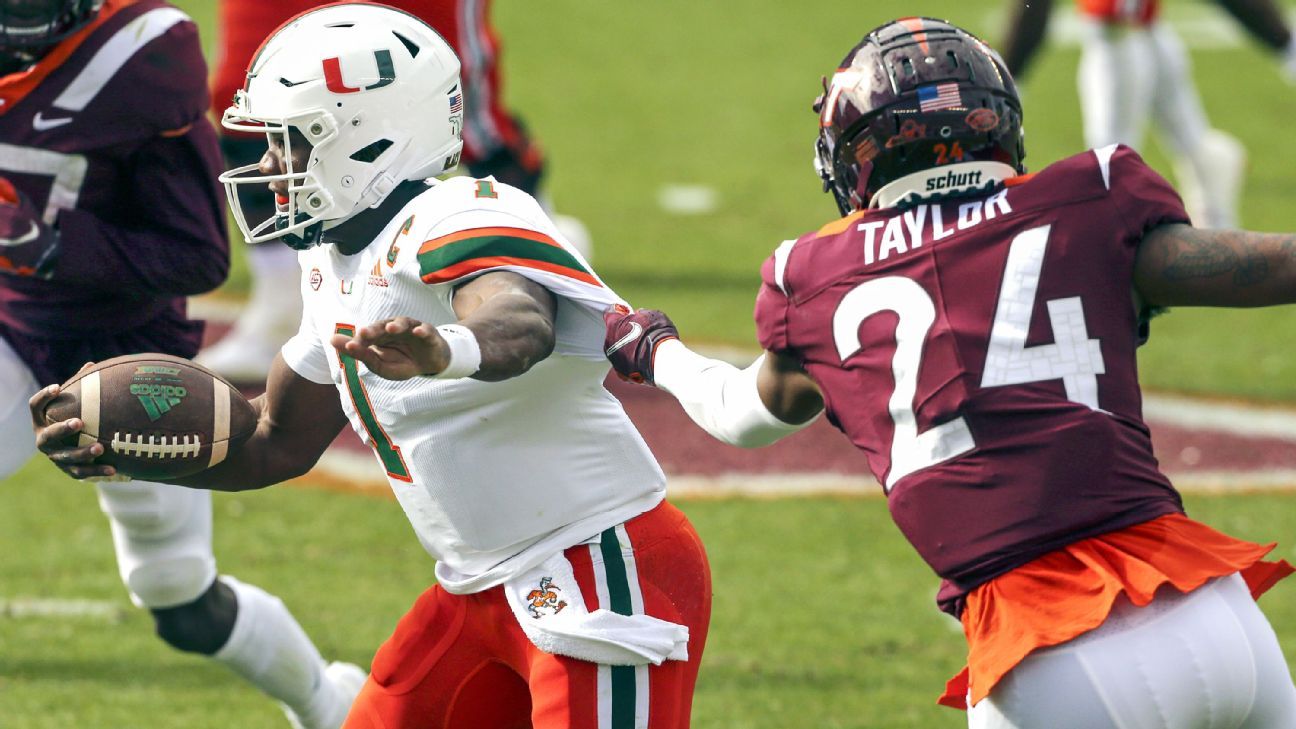 BLACKSBURG, Va. — D’Eriq King threw for 255 yards and a touchdown and ran for a score to rally No. 9 Miami to a 25-24 victory over Virginia Tech on Saturday.

The Hurricanes (7-1, 6-1 Atlantic Coast Conference) rallied from an 11-point, third-quarter deficit to win their fourth consecutive game and stay very much alive for a spot in the ACC championship game.

King guided the ‘Canes on two long second-half scoring marches. A 13-play, 75-yard drive ended with Cam’Ron Harris‘ 6-yard touchdown run, and cut the lead to 24-19 with 1:27 left in the third quarter. Miami failed to convert a 2-point conversion.

Miami put together a 10-play, 82-yard drive that ended with King throwing a dart to Mark Pope for a 36-yard touchdown to take a 25-24 lead with 5:59 left in the fourth quarter.

King, who rushed for a 10-yard touchdown in the second quarter, completed 24 of 38.

Hendon Hooker paced Virginia Tech, throwing for 201 yards and rushing for 53 yards and a touchdown.

Miami: The Hurricanes played well on defense, despite missing a couple of starters. Miami held the Hokies to a season-low 160 yards rushing and sacked Hooker six times, with Jaelan Phillips providing a lot of the pressure.

Virginia Tech: The Hokies have lost two straight and three of their past four as they struggle to sustain drives in the second half. Their final five drives ended with three punts, an interception, and on downs. The Hokies need to win two of their final three games to become bowl eligible for the 28th consecutive season.

Miami will remain in the top 10 of the Associated Press poll and may jump a couple of spots pending the outcomes of other games.

Virginia Tech: The Hokies travel to Pittsburgh — if the Panthers are ready to play. Pitt’s game Saturday against Georgia Tech was postponed because both teams were having issues with COVID-19.