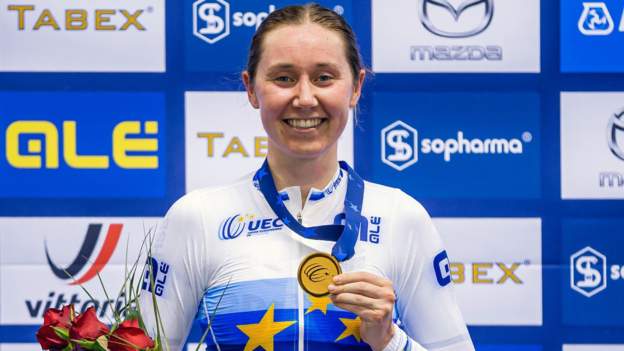 Great Britain’s Katie Archibald won her second title at the European Track Cycling Championships with gold in the points race.

Archibald won three of the first five sprints to put her in the lead at halfway.

With 30 laps left, she made her attack and showed strength to take the final sprint and win by 18 points.

Archibald said: “I get drawn into the sprints and it puts me in danger, so against a different field I would have been kicking myself as I was really in danger.

“The right attack could have done me in, so I’m glad I kept my head and didn’t let the wrong move go and I was there to contend at the finish.”

Of the other British riders in action on Saturday, Ethan Vernon was fifth in the men’s points race while Sophie Capewell was edged out for bronze in the women’s keirin.

Katy Marchant finished 12th in the same event after being relegated in the minor final.