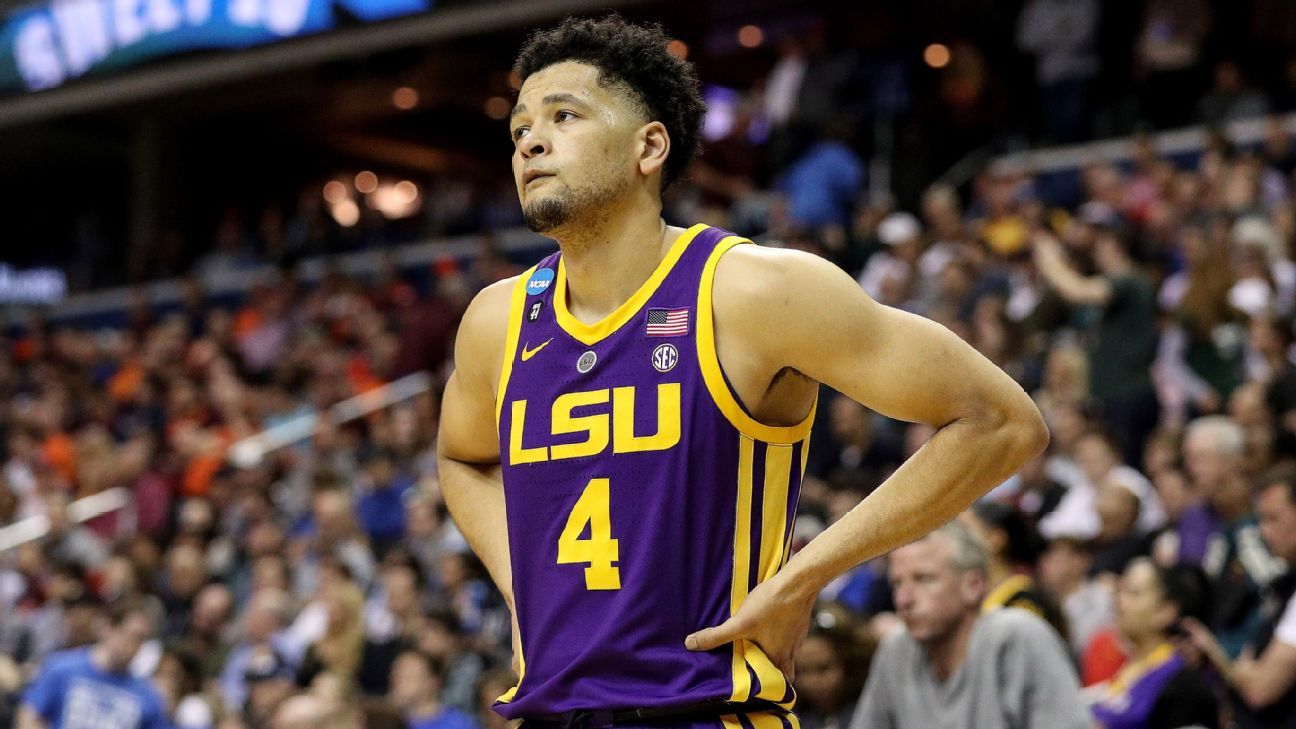 DO NOT GET Skylar Mays wrong — of course he wants to be picked in the first round of the 2020 NBA draft. It’s just that going 44th overall would be special in its own way.

“Being picked at 44 would be pretty cool,” the LSU guard said. “I wouldn’t be mad at that, to be honest.”

Wayde Sims wore jersey No. 44 with the Tigers. Actually, Sims had always worn 44 — or at least since he and Mays were 12 or 13 years old, inseparable friends with a special connection on and off the basketball court. Just before the 2018-19 season, though, Sims was shot and killed — and now, with the draft approaching, Mays is facing the biggest moment of his life without Sims.

“I can recall something with Wayde in pretty much every situation of my life, every day,” Mays said. “Grieving is a weird thing.”

Mays and Sims played two years together at LSU, where they were key rotation players, but neither was projected as an NBA prospect. But over the past two years, as Mays grappled with the death of his friend, he said he channeled his grief into heightened focus on the court, which led to a dramatic leap onto draft boards.

“Sky was always such a hard, diligent worker in everything that he did,” LSU coach Will Wade said of Mays, who maintained a 4.01 GPA while majoring in kinesiology with a pre-med focus. “But I do think [Sims’ death] gave him a little bit more sense of purpose, because he wasn’t just doing it for himself; he’s doing it for others, as well.”

Mays is now a well-established, second-round prospect, projected to go 46th overall by ESPN’s Jonathan Givony — a far cry from where Mays was just two years ago. And as he prepares to take the leap into the NBA draft (Nov. 18 on ESPN), his play is an enduring tribute.

“That made me more locked in on my job,” Mays said of losing Sims. “I just wanted to emulate his ways.”

MAYS AND SIMS met, naturally, through basketball, in a league in their hometown of Baton Rouge, Louisiana, in 2006.

“It was always Wayde and Skylar,” said Sims’ mother, Fay. “Like, you didn’t see Skylar without Wayde or Wayde without Skylar. I know I felt like Skylar was one of my own, and I still do now.”

They played AAU ball together then teamed up in sixth grade at University Laboratory School, a K-12 school on LSU’s campus in Baton Rouge.

They were 11 years old and playing at an AAU tournament in Lafayette, an hour west of Baton Rouge.

“It was a putback,” Mays said. “That’s probably the only time you can get one when you’re 11.”

A few years later, Mays caught up, getting his first in-game dunk during their freshman season in high school.

“He’d been dunking in games,” Mays said of Sims, who was 6-foot-6 by the eighth grade. “So me, finally, me being able to do it and say I could do something that he could do, that was a cool moment for me.”

They led University Lab School to a pair of state championships, before Mays left to play his senior season at Findlay Prep in Nevada.

Mays was a four-star recruit who had offers from around the country, including UNLV, whose campus sits just 10 miles from Findlay. Some recruiting analysts thought Mays’ move was signaling a future with the Rebels, but Mays committed to LSU that August. He was reunited with Sims, who had selected LSU over other local Louisiana schools two months earlier.

“We were like yin and yang,” Mays said. “Anybody who watched us play knows we were at the hip, how well we read each other, how we used to play off of each other.”

The two experienced their first losing season together as freshmen at LSU, but they began to turn things around in their sophomore season under the new coach, Wade. Heading into the 2018-19 season, LSU was ranked in the preseason top 25 and expecting big things.

The day before the first practice of the season, Sims and some friends attended a fraternity party at nearby Southern University, while Mays stayed at his dorm to study and prepare for practice the next morning.

Shortly after midnight on Sept. 28, 2018, an argument broke out outside the party involving about eight people, including one of Sims’ friends. Sims stepped between his friend and Dyteon Simpson, who allegedly responded by shooting Sims in the head. The encounter was captured on video by multiple bystanders, and the 20-year-old Simpson was arrested a day later. He remains incarcerated, awaiting trial.

Mays began getting a stream of text messages about the shooting around 2 a.m., most saying, “I’m sorry,” before another LSU athlete finally called to tell him what had happened.

“I pretty much went blank after that,” Mays said.

The rest of that Friday is hazy for Mays. He remembers having a team meeting but doesn’t remember if they reflected on what happened. Eventually, Sims’ parents came back to campus to pick up his dog, Buddha.

“I saw Ms. Fay and she hugged me and said, ‘That’s my only baby. That’s my only child,'” Mays said. “That’s when it really hit home really hard. I was still kind of in shock before, but when Ms. Fay hugged me … it hit me.”

Standing in front of hundreds, including former LSU football coach Les Miles and athletes from nearly every team on campus, with his coach by his side, Mays spoke for 11 minutes.

“He was more composed than I was up there,” Wade said. “I mean, there’s 50-year-olds that couldn’t do what he did. … It was just very, very powerful and something that very few people could do.”

Mays calls giving speeches his “biggest fear,” but, he said, “It was easy to talk about Wayde.”

“You find strength in yourself you didn’t know you had,” he said.

LSU DEDICATED THE 2018-19 season to Sims’ memory. The school preserved Sims’ locker — two stalls down from Mays’ — behind plexiglass for what would have been Sims’ final two seasons before graduating. The Tigers wore a memorial patch on their jerseys, and Mays began wearing a wristband bearing Sims’ No. 44, as LSU made an unexpected run to the Sweet 16 in 2019.

“It just felt like everything was going our way and it was always something weird [happening] that some people [attribute to the] basketball gods,” Mays said. “We all were saying Wayde was helping us out there.”

Throughout that season, assistant coach Greg Heiar, who was assigned to work with Mays twice a day almost every day for three years, saw a player who was in pain but newly determined.

“It was a life-changing moment,” said Heiar, now an assistant coach at East Tennessee State. “He was already focused before, but he was laser-focused after [Sims’ death].”

Though Mays’ outstanding GPA and potential in the medical field were frequent topics of discussion during LSU broadcasts, one day he sat down with Heiar and started talking about his future — not as a doctor, but as a professional basketball player.

After averaging 9.8 points per game over his first two seasons, Mays boosted his scoring average to 13.4 as a junior, eventually earning second-team All-SEC honors. He bested that a year later, putting up 16.7 PPG and receiving All-SEC first team recognition while also being named the SEC Scholar Athlete of the Year for the second consecutive season.

This offseason, Mays worked on his shooting with NBA guard Langston Galloway. After shooting 39.4% from 3-point range as a senior, Mays put up impressive shooting numbers at the NBA’s virtual draft combine, finishing second in the spot-up 3-point shooting drill (76%) and tied for eighth (70%) in the endurance drill (five minutes of consecutive game-speed spot-up 3s).

The combine performance was emblematic of his improvement over the years. Mays shot just 32.8% from 3-point range during an underwhelming freshman season, and when Wade took over as coach following that season, some privately asked him if he planned on keeping Mays around. He scoffed at that notion, having been impressed by Mays during an early-season game in the Bahamas, when he came off the bench to score 14 points against Wade’s VCU squad.

“When he puts a task in front of himself, whether it’s academic or otherwise, he’s going to do everything he can to achieve whatever he set out to do,” Wade said. “And this was what he set out to do basketball-wise.”

SINCE LSU’S 2019-20 season prematurely ended in March due to the coronavirus pandemic, Mays has been preparing for the draft in Baton Rouge, where he is surrounded by reminders of his late friend.

“I just let it flow naturally,” he said. “Some days are good. Some days are bad. But with Wayde always being so positive, I’d say most days are positive.”

“It was Skylar that allowed me to say, ‘OK, like, I have to sit here and watch this game,'” Fay Sims said. “That helped me to even be able to go to some of the games after Wayde’s passing. I knew that I could go and support Skylar and love and hug on him at the end of the games.”

When LSU clinched the SEC championship against Vanderbilt on March 9, 2019, Mays immediately found Fay in the stands and gave her a hug. Then he watched with joy as Fay and her husband, Wayne, who played at LSU from 1987 to 1991, climbed the ladder to cut down a piece of the net.

“It was just great that they got to be a part of something their son had such a big touch on,” Mays said.

He also wants to make sure they’re present for his big moment. He grew up with their son, sharing these basketball dreams, and he said “it’ll mean everything” to have Fay and Wayne Sims at a draft celebration he plans to hold in the short window between the draft and the start of training camp on Dec. 1.

And while Wayde Sims won’t be there, his memory will always be with Mays.