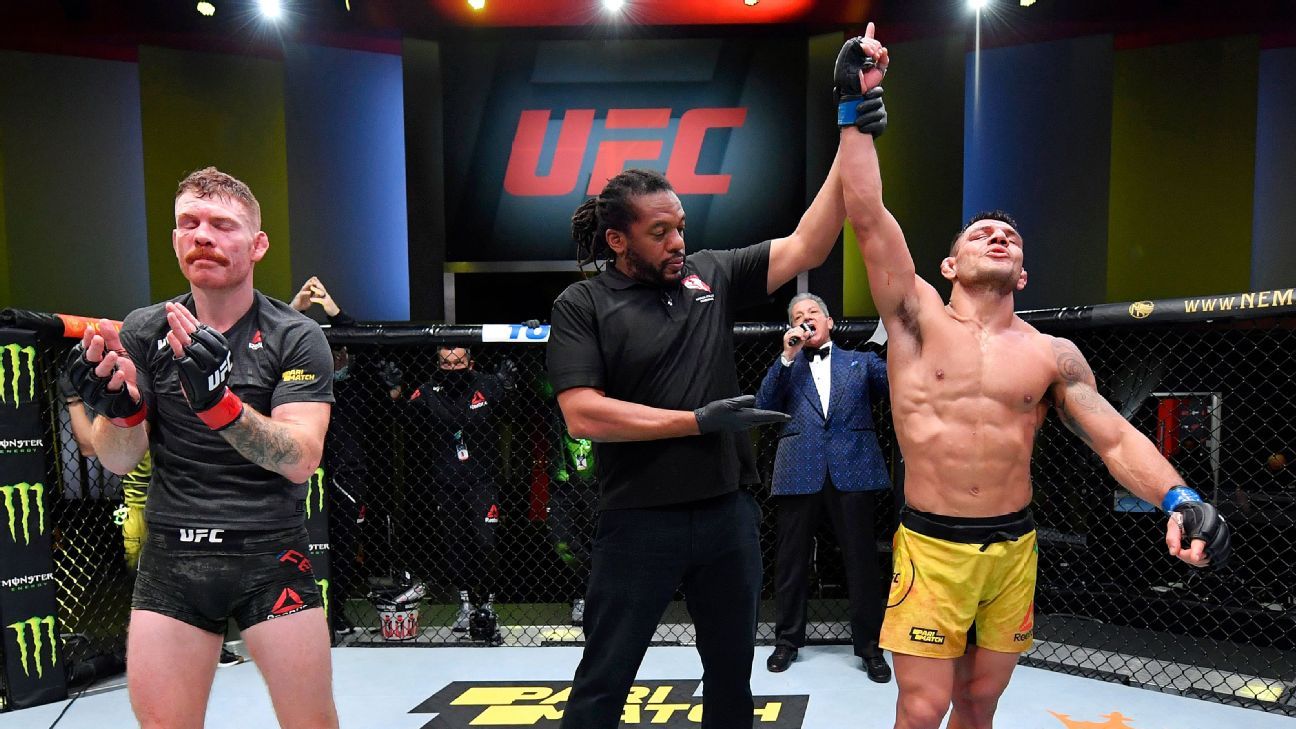 Rafael dos Anjos is back in championship form.

The former UFC lightweight titleholder returned to his longtime division Saturday and was brilliant in beating Paul Felder via split decision (47-48, 50-45, 50-45) in the main event of UFC Fight Night in Las Vegas. Dos Anjos showed a well-rounded game, doing damage on the feet — Felder was a bloody mess by the end — and grinding things out against the fence, as well as on the ground.

Felder was supposed to be a color commentator on the ESPN+ broadcast for this card. But dos Anjos’ original opponent Islam Makhachev withdrew due to an undisclosed injury last Sunday. Felder agreed to step in on just five days notice Monday. Coming in, ESPN had Felder ranked No. 6 in the world at lightweight.

“I was training for a wrestler, a southpaw wrestler,” dos Anjos said. “And Paul Felder is an orthodox striker. Very technical. Strong guy. But we had to make the show happen.”

In his post-fight interview, dos Anjos called out Conor McGregor, a fight that was supposed to happen in 2016 before dos Anjos got injured. Dos Anjos said if UFC lightweight champion Khabib Nurmagomedov is truly retired now, a bout with him and McGregor makes the most sense.

“I want to face whoever is on the line for that belt,” dos Anjos said. “I know I’ve got a lot in me still. At 36 years old, tonight was my 30th UFC appearance. I think if Khabib is really retired, it will leave the division wide open. If you look at the contenders, only me and Conor, we are the only real [former] champions in that division. … If the division is open, I think me and Conor is the fight to make.”

Six months ago, dos Anjos decided to move back down from welterweight to lightweight. He moved back to his native Brazil for training camp and worked with the prestigious Nova Uniao camp in Rio de Janeiro. Dos Anjos dedicated himself to dropping the pounds, staying strict with his diet and using the nutritionist of former featherweight champion and legend Jose Aldo.

Dos Anjos vs. Makhachev was initially scheduled for UFC 254 last month, but dos Anjos and his entire family – including his children and mother – tested positive for COVID-19. His wife, Cristiane, had to be admitted to the hospital. All are healthy now, but there were some moments of trepidation over the last few weeks.

“It’s been a crazy rollercoaster this camp,” dos Anjos said.

Meanwhile, Felder had to cut more than 22 pounds beginning Monday to make weight Friday morning, which he did successfully.

“Thursday night was probably one of the darkest nights of my life cutting that weight,” Felder said in his post-fight interview.

While Felder had been training for a triathlon, he admitted that he did almost no MMA training recently.

“I was in really good cardio shape,” Felder said. … “I had not stepped foot in an MMA gym in four months. That was based on pure endurance training and pad work.”

Felder looked slick and fast on the feet throughout. He cut dos Anjos with a punch in the first and let loose with solid combinations in every round. But the mix of powerful striking, clinch work and takedowns is what earned dos Anjos the victory. In the fourth, dos Anjos cut Felder over Felder’s right eye with a jab. Felder was pouring blood for the rest of the way.

The card took place in front of no fans at the UFC Apex, a venue across from the UFC’s Vegas corporate campus.

Dos Anjos (30-13) had spent three years at welterweight prior to this bout. The Brazil native, who lives in California, had lost four of his last five fights coming in, all against welterweight contenders. Dos Anjos, 36, held the UFC lightweight title in 2015 and 2016. He has vowed to get there again during this latest run at 155 pounds – and Saturday was a great start.

Felder (17-6) dropped a split decision to Dan Hooker in his last bout back in February. Before that, the Philadelphia native had won five of six. Felder, 35, is known as one of the most exciting fighters in the lightweight division. He had been contemplating retirement after the Hooker loss, saying he only wanted to come back for fights that enticed him. Those retirement thoughts are no more, Felder sad.

“I can tell you guys with certainly: I’m not going anywhere right now,” Felder said.