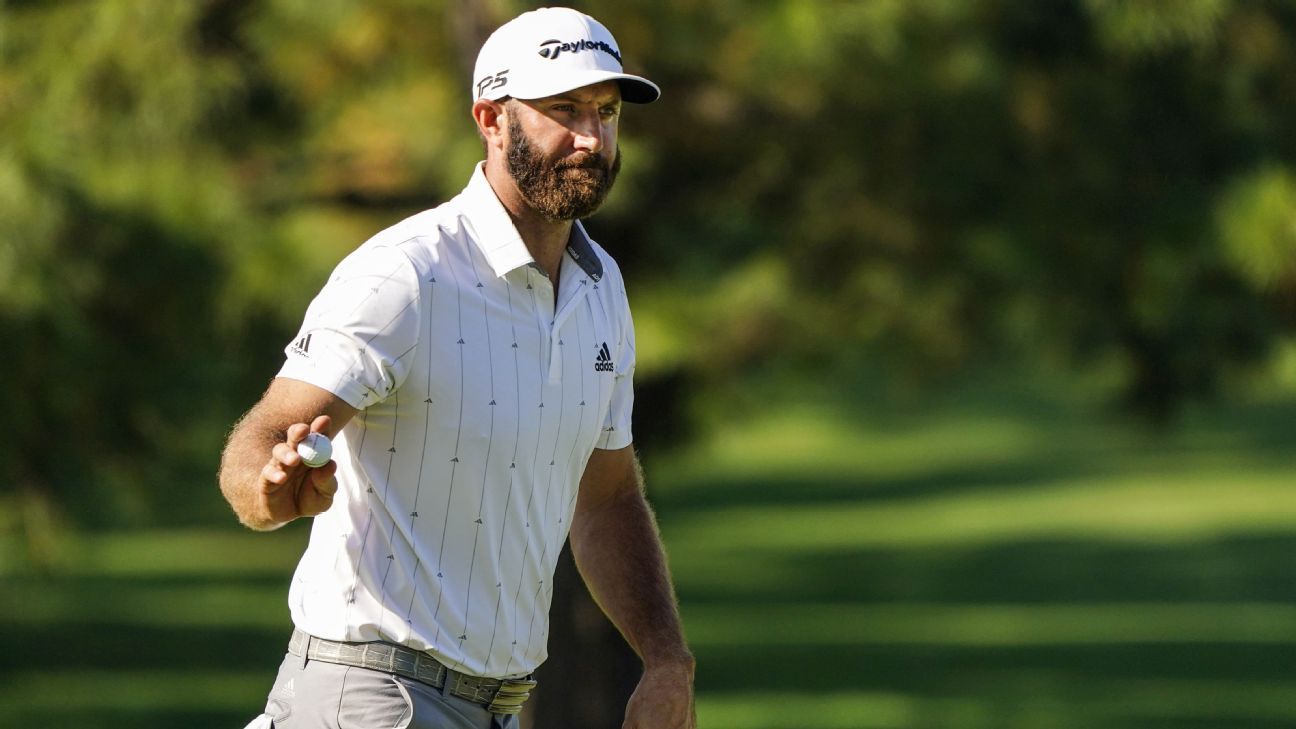 AUGUSTA, Ga. — Dustin Johnson began his assault on Augusta National with a 5-iron for a tap-in eagle, and he never relented until he matched the 54-hole record at the Masters and built a 4-shot lead to put himself in prime position for another major.

Johnson has been in this position before, and he plans to lean on his experience.

Not from the 82 he shot at Pebble Beach in the 2010 U.S. Open. Not the three-putt from 12 feet on a bumpy 18th green that cost him at Chambers Bay. Not even the 1-shot lead he lost three months ago at Harding Park. They were among the four times that he had at least a share of the 54-hole lead in a major and did not convert.

He’s talking about the past three days at Augusta National. His has been a masterful performance.

“If I can play like I did today, I think it will break that streak,” Johnson said Saturday. “Tomorrow, it’s just 18 holes of golf. I need to go out and play solid. I feel like I’m swinging really well. If I can just continue to give myself a lot of looks at birdie, I think I’ll have a good day.”

A third round that began with 10 players separated by 1 shot turned into a one-man show.

The No. 1 player in the world looked every bit the part with a 7-under 65, pulling away with the eagle and two birdies in the opening four holes, nearly holing a wedge from the seventh fairway, handling the par-5s on the back nine with two-putt birdies and going the previous 30 holes without a bogey.

He was at 16-under 200, matching the 54-hole record Jordan Spieth set in 2015, when he won the Masters by 4 shots over Phil Mickelson and Justin Rose.

This cast of challengers is not nearly as experienced.

Two of them are Masters rookies. Sungjae Im, the supreme ball striker from South Korea who won his first PGA Tour title two weeks before the COVID-19 pandemic shut down golf in the spring, birdied the last hole for a 68. Abraham Ancer of Mexico saved par on the 18th for a 69.

Joining them at 12-under 204 was Cameron Smith of Australia, who had 12 straight pars before he ran off three straight birdies and closed with three scrambling pars for a 69.

“He’s been there before multiple times, and No. 1 in the world,” Ancer said. “I think he’s right where he wants to be. We know that we have to go low, and that’s it. It’s very simple. If DJ goes out there and plays really solid like today, it’s going to be pretty much impossible to catch him. Whatever has to be done out there has to be pretty special.”

Still, there is enormous pressure on Johnson because of his history. He has not converted two 54-hole leads, nor has he won at two majors in which he shared the 54-hole lead. His only major was the 2016 U.S. Open, in which he rallied from 4 shots behind at Oakmont.

“Anyone with a 4-shot lead is expected to win,” Smith said. “There’s going to be plenty of boys firing tomorrow.”

Attacking flags is what Augusta National has allowed in November, with rain earlier in the week and warm, calm conditions that have kept the turf soft and vulnerable.

Johnson, who had to sit out two tournaments after testing positive for COVID-19 a month ago, still came into the Masters having won twice since the beginning of August. During that span, he also finished runner-up three times and tied for sixth in the U.S. Open.

“I’m very comfortable with having the lead going into tomorrow. I’ve been in this situation a lot of times,” Johnson said. “I’m looking forward to the challenge. It’s still going to be a tough day. I’m going to have to play well if I want to get it done.”

Justin Thomas and Jon Rahm had their chances, only to make untimely mistakes. Rahm nearly topped his second shot on the par-5 eighth, which he attributed to mud on his golf ball, and hit his next one off a tree and into the bushes on his way to a double bogey.

Thomas sailed his second shot over the 15th green and into the water, making bogey on a par-5 on which he was hoping to make up ground. Both bogeyed the 18th hole. Thomas shot 71, and Rahm had a 72.

“Seriously? How would I describe? Pretty awful,” he said.

Starting times for the final round have been moved up to finish by 3 p.m. so CBS can honor its NFL contract, and it will be threesomes off both tees. Just like all week — and all season — there will be no roars to add to the pressure.

“Unfortunately for all of us chasing DJ, is there’s no fans or nothing to make that moment even harder, to have the buzz, to have the adrenaline, to have a little bit more pressure put on him that won’t be there this year,” Thomas said.

Defending champion Tiger Woods will stick around Sunday to present the green jacket, and he’ll have to leave his at Augusta National until he returns.

Woods was 4 under through 10 holes to start the Masters, and he picked up only one shot over the next 44 holes. He finished a 71 in the second round Saturday morning, had a 72 in the third round and was 11 shots behind.

U.S. Open champion Bryson DeChambeau was more dizzy than sore. He felt so odd Thursday night that he had another COVID-19 test to be sure — it came back negative — and the betting favorite of this Masters was in the middle of the pack, 13 shots behind.

The scoring has been low all week. The 36-hole cut Saturday morning was at even-par 144, the lowest in Masters history, another update to the club’s record book.

Still in front of Johnson is a chance to set the 72-hole record. All he cares about is a green jacket, and given his past experience, he knows better than to look ahead.