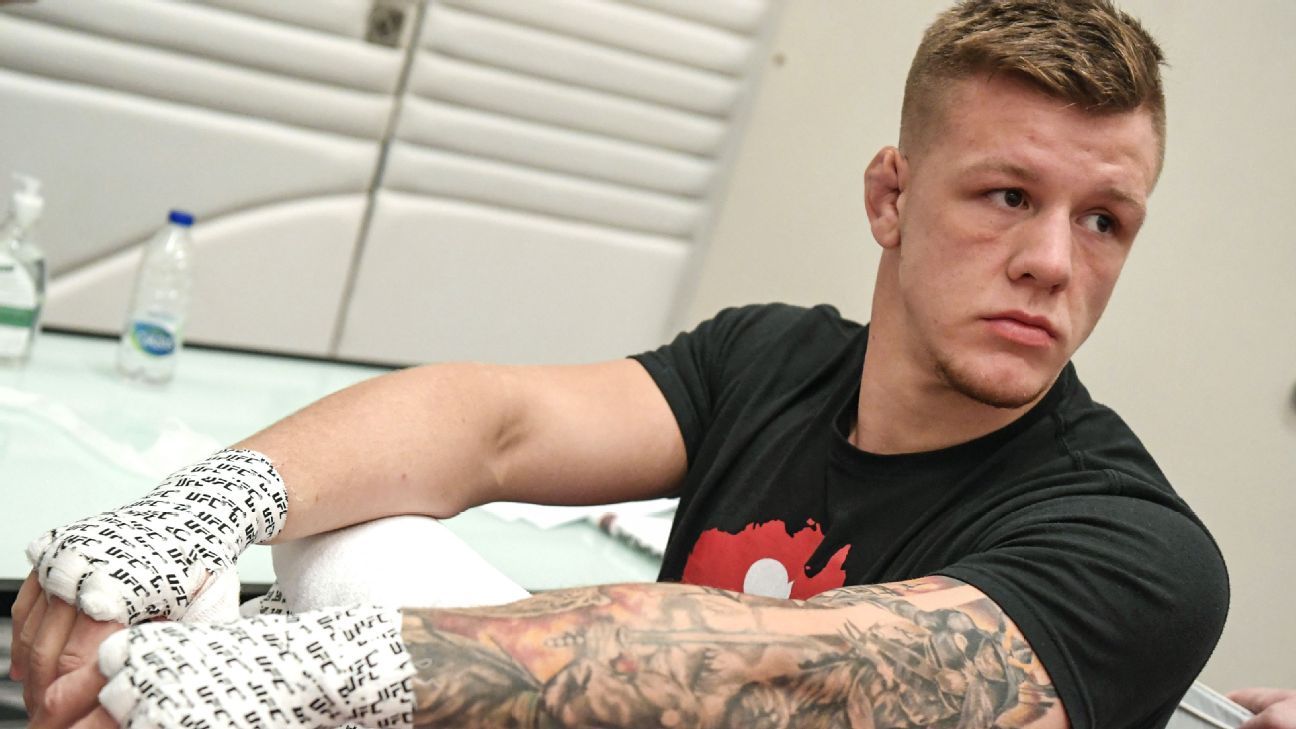 Jimmy Crute considers himself lucky. By the age of 12 he already knew what he wanted to do in life. The problem was he originally didn’t think he was very good at it.

Now 24, Crute (12-1) looks like a future title contender in the UFC’s light heavyweight division, and he is ESPN’s pick for the No. 1 MMA fighter in the world under the age of 25. That’s quite a résumé for someone who didn’t think of himself as “athletic” until just recently.

Both men’s and women’s flyweight titles will be on the line at UFC 255 on Saturday night. In the main event, Deiveson Figueiredo will make his first title defense against Alex Perez. Prior to that bout, women’s champ Valentina Shevchenko will take on Jennifer Maia.

“That’s the reason I worked so hard, because I didn’t think I was naturally good at it,” Crute said. “Which is sort of a blessing now, because I’ve held onto that work ethic. I used to train until I couldn’t anymore, just because I felt I needed to in order to match up with anyone else. It got to a point where I was doing three sessions a day.

“I think the turning point was after my first loss [to Misha Cirkunov in September 2019]. I went into that fight thinking I couldn’t win. I had all these doubts. And then it was a competitive fight. And it was only competitive because of my physical attributes. I didn’t use any skill in that fight. And I thought to myself, ‘F—, I have to stop doubting my physicality, because that’s not the reason I lost.'”

Confidence hasn’t been a problem for Crute in 2020. He went 2-0 this year, with first-round finishes over Michal Oleksiejczuk and Modestas Bukauskas.

But even though he is no longer wearing himself out in the gym to overcome self-doubt, Crute’s commitment to MMA remains constant. And perhaps nothing symbolizes that more than “the van.”

Before his last two bouts, Crute, who trains out of Melbourne, Australia, has lived in a 2019 Mercedes Sprinter van he keeps in the Resilience Training Centre parking lot. He has modified the van to include a fold-down bed, a fridge, a television, a coffee machine and other amenities. He shares it with his 3-year-old American Bulldog, Buddha.

“I’ll wake up at 7 a.m., or whenever Buddha wakes me because he wants breakfast,” said Crute, whose home is two hours away from the gym. “I’ll take him on a bit of a walk. Stretch or meditate. Have my first session at 10 a.m. Go to a dog park and let Buddha run around so he’s tired the rest of the day. Mitt session, then I’ll have a cookout for dinner and chill out. My day pretty much revolves around training and making Buddha happy.

“I’ve always thought you need to be a little uncomfortable to grow, and I think the main benefit is it makes me focus 100 percent of my time on getting better. And not because I train more, your body can only train so much, but I get to focus on my recovery more. I don’t have a long drive home. I get my meals straight away, because they’re right there. I just relax in my van. I don’t have to worry about anything other than recovery and making sure my next session is as good as my last one.”

Crute, who is 4-1 in the UFC and ranked No. 13 in the promotion’s official rankings, does not currently have a fight booked. He’s got his eye on former title challenger Anthony Smith, who fights Devin Clark later this month. In a perfect world, Crute would start his 2021 with a fight against Smith, and end it in position to fight for a belt by 2022.

“Ideally, I want to fight again in February,” Crute said. “I’m watching Anthony Smith’s next fight very closely. I would absolutely love to do that fight, either a main or co-main event. After that, bust out a few more fights and hopefully be fighting for a title in early 2022.”