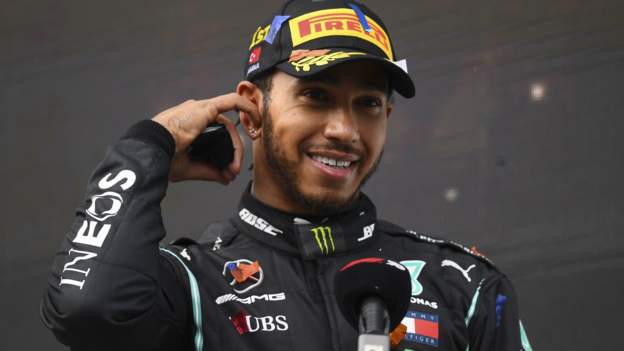 A group of MPs has called on the prime minister to recommend Lewis Hamilton for a knighthood.

Sir Jeffrey Donaldson MP, chair of the All-Party Parliamentary Group on Formula 1, told BBC Sport it is “the right time to do this”.

The group plans to write to Prime Minister Boris Johnson this week.

Donaldson said: “The All-Party Parliamentary Group on Formula 1 supports the call for Lewis Hamilton to receive national recognition of his tremendous sporting achievements for British motorsports.

“With his record-breaking season this year, we believe now is the right time to do this.”

The BBC has seen a letter, sent to the prime minister last week by the co-chairmen of the All-Party Parliamentary Group on Motorsport, saying “we write to encourage you to recommend to Her Majesty The Queen that Lewis Hamilton receive a knighthood”.

The letter continues: “It is clear that Lewis has demonstrated his outstanding achievement in his field… He has used this and his own experience to support others and he is a credit to the United Kingdom.”

Meanwhile, David Richards, chairman of Motorsport UK, wrote to the prime minister on 11 November, saying: “For many years, Britain has led the world in F1 engineering and we’ve produced many great drivers.

“But we can now celebrate the greatest of them all and there can be no more fitting way to do this than award Lewis Hamilton a knighthood.”

Hamilton, who lives in Monaco, has faced scrutiny in the past over his tax arrangements, but has previously defended himself against criticism by saying that he pays “a lot” of tax in the UK.

On Hamilton’s tax status, Richards wrote that Hamilton “is subject to withholding tax at source [being taxed at source] in nine countries around the world and files tax returns in four of the nine countries” and added that HM Revenue and Customs’ 2019 figures put him “within the top 5,000 highest UK income tax payers”.

Richards added: “It would therefore be totally wrong for the UK to deny Lewis an award befitting his historic achievements because of where he chooses to live or work or because his tax status has been misunderstood.”

In a 2014 interview with the Sunday Times, Hamilton discussed his arrangements, saying: “What people don’t realise is that I pay tax here, but I don’t earn all my money here.

“I am contributing to the country and, not only that, I help to keep a team of more than 1,000 people employed.”