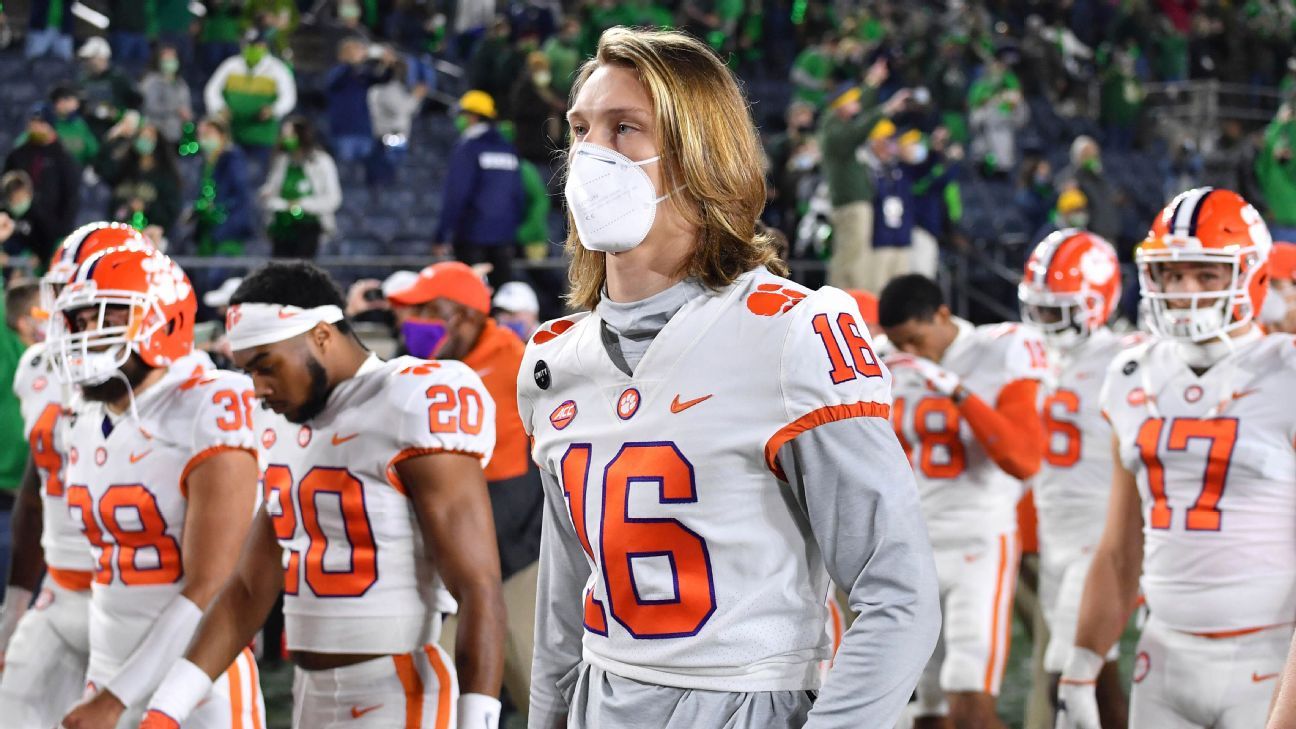 Clemson quarterback Trevor Lawrence is fit, confident and, most importantly for the Tigers, virus-free.

The junior said Tuesday that he is ready for the fourth-ranked Tigers’ championship run down the stretch.

Lawrence missed the past two games for Clemson (7-1, 6-1 Atlantic Coast Conference) after testing positive for COVID-19, then spent last week recovering his fitness during the team’s bye week. He’ll be back behind center on Saturday when the Tigers head to Florida State (2-6, 1-6).

“I feel just as good as I did when I left a few weeks ago,” Lawrence said. “Back to normal.”

That’s a frightening prospect for Clemson’s remaining opponents. The 6-foot-6 passer with the deft touch and rocket arm is 31-1 as a starter at Clemson and was leading an offense that had averaged 48 points a game with Lawrence in charge.

Lawrence watched from isolation as freshman backup D.J. Uiagalelei rallied the Tigers from 18 points down to beat Boston College 34-28 on Oct. 31. He was on the sideline at Notre Dame a week later — he had not completed coronavirus protocol — as Clemson fell 47-40 in double overtime.

Lawrence is anxious to play again.

“He came back with a ton of energy,” Clemson offensive coordinator Tony Elliott said. “You could tell that, obviously, he was disappointed he couldn’t be out there for his teammates.”

It was difficult not being on the field, Lawrence said. However, he felt true joy and appreciation when he got back to working around his teammates.

“This shows it’s a privilege to get to do what we do,” he said. “Being out here, the days can be long sometimes, sometimes you can lose sight of what you do and why you do it.”

Few do it as well as Lawrence.

He’s thrown for 1,833 yards, completing over 70% of his throws with 17 touchdowns and two interceptions, ranking 12th nationally in passing efficiency. Earlier this season — expected to be his last in college — Lawrence broke the ACC mark for most passing attempts without throwing a pick, which was held the past decade by North Carolina State’s Russell Wilson.

Lawrence’s return was welcomed by the Tigers.

“He’s right back,” tight end Braden Galloway said. “From a football standpoint, it looks like he hasn’t missed a beat.”

Lawrence said it took a day or two to get his wind back. Now, he’s eager to guide the Tigers’ chase of their sixth straight ACC title and third national title in five years. That starts against the struggling Seminoles, who have lost three straight and have not beaten Clemson since 2014.

Florida State coach Mike Norvell knows his team will be challenged in slowing down Clemson with Lawrence back in control.

“He is a special talent, you could say once in a decade,” Norvell said. “He’s a fun player to watch, not only the physical tools, but the charisma that he brings and the leader that he is.”

Lawrence chuckled when asked how his status as Heisman Trophy front-runner took a hit the past three weeks away. He understood that time doesn’t stand still, and if you don’t play, you’re often overlooked.

“No watch list or award list is going to change how I feel or the confidence I have,” Lawrence said.

Lawrence said he missed the team moments more than the individual ones. He couldn’t be in the locker room — Clemson is known for its postgame dance parties after victories — with his teammates after the Boston College win three weeks ago.

That was also his expected next-to-last game at Clemson (the final home game is Nov. 28 against Pittsburgh), and Lawrence regretted losing time in front of Tiger fans.

“I’ve been trying to remind myself to appreciate all the little things,” he said.