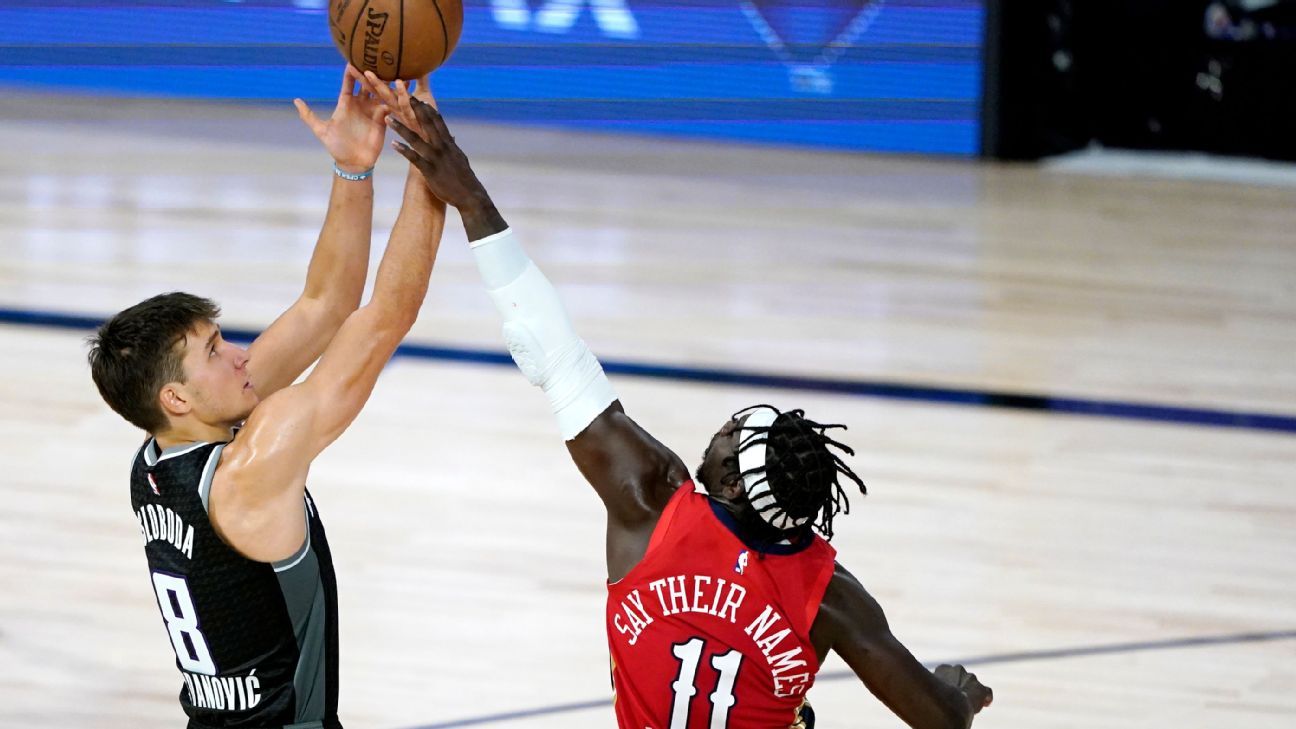 The Bucks made a significant case to Antetokounmpo about why he should sign the five-year supermax extension that’ll soon be available to him.

After executing the Holiday trade late Monday, the Bucks and Kings reached agreement in principle on a sign-and-trade that’ll bring Bogdanovic and Justin James to the Bucks, sources said.

Both Holiday and Bogdanovic address Milwaukee’s need for shooting around Antetokounmpo, and Holiday is one of the best defenders in the league.

As part of the trade for Holiday, Milwaukee is sending New Orleans a package that includes Eric Bledsoe, George Hill and three first-round picks, sources said.

The trade also includes a pair of pick swaps and will ultimately amount to something similar to what the Pelicans received from the Lakers last season in the deal that sent Anthony Davis to Los Angeles.

Holiday has a reputation around the league as being one of the best defenders in the league and the best two-way guard. He averaged 19.1 points and 6.7 assists last season.

New Orleans adds to its pick war chest, which includes the Lakers’ 2021 reverse lottery-protected pick (8-30) that becomes unprotected in 2022, the right to a 2023 Lakers first-round pick swap and a swap in 2024 or 2025 for another first-rounder.

The draft selections give the team even more flexibility as New Orleans looks to build for the future around Zion Williamson and Brandon Ingram, who is a restricted free agent but someone the Pelicans view as a key building block going forward.

Holiday spent the past seven seasons in New Orleans, which acquired him in a draft-night deal from the Philadelphia 76ers in 2013, following his lone All-Star season. His first three years in New Orleans were filled with injuries, but over the past four seasons, he solidified his status as one of the top defenders in the league.

That status was backed up by several NBA stars this past offseason. Portland Trail Blazers guard Damian Lillard told Holiday’s New Orleans Pelicans teammate JJ Redick that Holiday is “the best defender in the league” in August during an appearance on Redick’s “The Old Man & The Three” podcast.

Bogdanovic, 28, is a versatile offensive wing built for the modern NBA — a volume 3-point shooter and an effective playmaker. He attempted nine 3s per 36 minutes last season for the Kings and shot 37.2% from deep. That number jumps to 40.7% on catch-and-shoot 3-pointers.

He’s also effective on the move. Bogdanovic posted good numbers coming off screens and dribble handoffs and did well pushing the ball up the floor in the Kings’ fast-paced offense last season. He averaged 15.1 points, 3.4 assists and 3.4 rebounds in 29 minutes per game last season.

Bledsoe, who will turn 31 before the season starts, played nearly three seasons in Milwaukee and averaged 14.9 points, 5.4 assists and 4.6 rebounds last season as the Bucks’ starting point guard. Bledsoe was a first-team All-Defensive selection in 2018-19 and was a second-team selection last season.

Hill, 34, has two years left on his contract. He’s set to be paid $9.6 million next season and $10 million the following year, though as with Bledsoe, the last year is only partially guaranteed, at $1.3 million.

Hill led the NBA in shooting 46.0% from 3-point range last season — just ahead of Redick’s 45.3%. Hill averaged 9.4 points per game as a key reserve for Milwaukee last season.