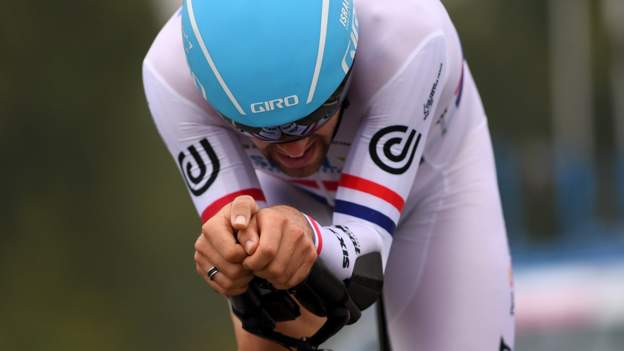 Alex Dowsett’s bid to regain cycling’s hour record has been postponed after he tested positive for coronavirus.

The 32-year-old Briton first claimed the record in 2015 and planned a new attempt at the Manchester Velodrome on 12 December.

But after his positive Covid-19 test was confirmed, the Israel Start-Up Nation rider revealed that the bid would not take place until next year.

The current record was set by Belgian Victor Campenaerts in Mexico in 2019.

Dowsett, who won stage eight of October’s Giro d’Italia, suffers from haemophilia A and was planning to raise money for charity.

“I am really disappointed the attempt can’t go ahead as planned but my health is first and foremost the priority,” he said. “We’re looking to announce a 2021 date as soon as possible.”

His record was set covering the distance of 52.937 kilometres on 2 May 2015 in Manchester, before fellow Briton Sir Bradley Wiggins set a new mark of 54.526km 36 days later.

In 1997, governing body the UCI created the “hour record” – in which riders must compete on specific machinery with some restrictions – and “best human effort”.