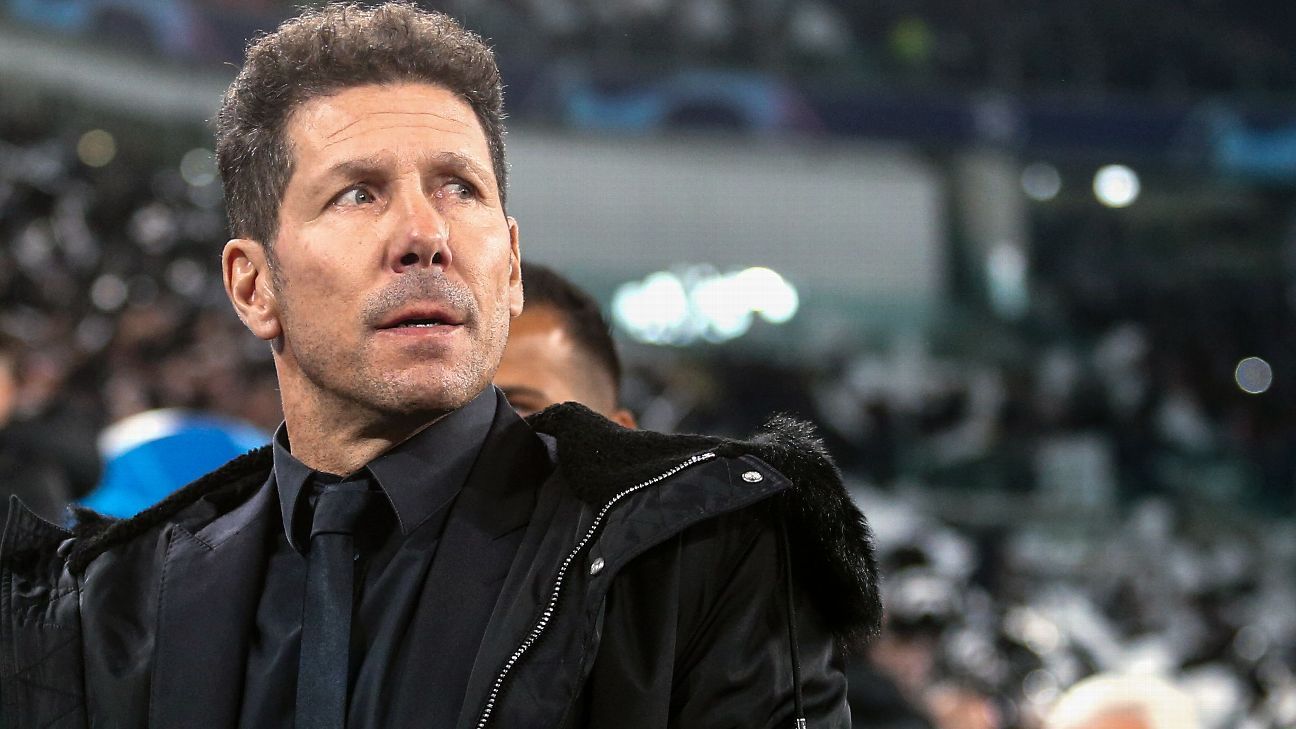 Two days before Christmas will mark Diego Simeone’s ninth anniversary as manager of Atletico Madrid. So glorious has been his era, the greatest in this club’s 117-year history, that the combative Argentinian’s achievements seem endless. They’re not, of course, but it wouldn’t be hard to be seduced by the illusion.

Count them up: Six European finals, four trophies hauled back to Madrid from Monaco, Tallinn, Bucharest and Lyon against Chelsea, Real Madrid, Athletic Club and Marseille. Exemplary. While the two Champions League final defeats still sting like salt in an open wound, perhaps scarring him for the rest of his life, they nevertheless form part of the hundreds of millions of euros his work, in partnership with German “Mono” Burgos, has earned the club.

Simeone’s tenure is marked not simply by Atleti punching hugely above their weight in the transfer market — repeatedly trading superbly, as well — but by the fact that Los Rojiblancos have never, in their entire history, seen such revenue flood the club’s coffers. It’s true that this has catalysed an unheralded acceptance of risk, like huge salaries and two deals, Thomas Lemar and Joao Felix, that smashed Atleti’s prior transfer records. But Simeone has remained a money-making machine for the men who employed him.

I believe Simeone is the best-paid football coach in the world and Atleti have never disputed reports that his contract, which runs until summer 2022, is a basic €22 million.

He won the club he loves their first Spanish league title since 1996. Nirvana!

He ended the brutal 14-year hoodoo that rivals Real Madrid held over them: Atleti were not only incapable of winning in that time, but fully deserved the infamous banner “Searching for a worthwhile rival so that we can have competitive derby matches again — apply here” that Los Blancos’ fans held up just before the Simeone effect hit home and Atleti began to win routinely again, a process that began with victory in the 2013 Copa del Rey final in the Bernabeu in Jose Mourinho’s last match in charge.

The Simeone-ification of Atleti has seen them win in Porto, Milan, Rome, London, Eindhoven, Lisbon, Leverkusen, Moscow, Liverpool and Istanbul, a record for which even coaches considered “great” would give their eye teeth. But the thing this savvy, durable, warrior coach cannot do for love nor money, despite twice knocking them out of the Champions League and winning the title with a 1-1 draw at Camp Nou, is beat Barcelona in La Liga.

By definition (or else they wouldn’t have been champions), Madrid’s red-and-white team didn’t need to beat Tata Martino’s Blaugrana in 2013-14, but that won’t wash this time. That campaign was a three-way race; 2020 is a battle royale where there are, arguably, as many as six title contenders: La Real, Madrid, Barcelona, Sevilla, Villarreal and Atleti.

Laugh if you want, dismiss the dark-horse outsiders this early if you dare. But this will absolutely not be a season in which the fourth-place team (Athletic in 2014) will be 20 points off the winner and 17 points adrift from the teams that finished second and third. This is a league in which every single crucial point won is like freeing a prisoner onto whom your enemies desperately want to hold.

If Simeone can end the single most embarrassing statistic of his entire managerial career — anyone who thinks that it’s losing two Champions League finals to Madrid can go and take a running jump — by beating Barcelona at the Wanda Metropolitano on Saturday night, the celebrations won’t simply be about tucking another record into his photo album. Instead, it will be a firm declaration of title credibility.

Let’s put some meat on these ugly bones.

The most common scoreline? It’s 2-1, which with the other three 1-0 defeats, four 1-1 draws plus a 0-0 draw, all help suggest how little it would have taken over the past nine years to inch from tight draws or single-goal defeats to glorious, jinx-ending victory. Still, it’s never happened.

Overall, it’s not quite as heinous a record as the one Simeone came in to shatter — that 14-year, all-competition quivering wreck-fest against Madrid — but it’s still very poor. Simeone, devastating kryptonite to most of the elite coaches around Europe, has failed to defeat Pep Guardiola, Tito Vilanova, Tata Martino, Luis Enrique, Ernesto Valverde or — yes it’s true, folks — Quique Setien while they’ve steered a variety of Barcelona teams through good times and bad.

Of course, the principle thorn in Simeone’s side has been a fellow Argentine — how ironic that is.

Lionel Messi has 15 goals or assists across Barcelona’s through-thick-or-thin domination of Atleti in Spain‘s Primera Division since 2011. He’s scored penalties and direct free kicks, he’s scored or assisted in the final seconds to turn defeats into draws, draws into wins and every so often, he’s created all-time outright masterpiece goals like the one that won this fixture, at the Metropolitano, last time it was played.

Remember it? Barcelona weren’t particularly impressive or insistent throughout, completing loads of passes but about 70% of them going square or backwards, with Koke playing catenaccio-close to Messi until the 41st minute of the second half.

It took a loose cross-field pass from Lemar, Sergi Roberto nodding the ball down to Frenkie de Jong in open space, an Ajax-esque probing run from the Dutchman and Messi screaming for it on the right wing. Once delivered to his feet, with Atleti’s midfield puffing furiously even to get back within visual range, never mind prevent catastrophe, Messi took the ball for an infield sprint, made Thomas Partey and Saul inadvertently play Twister with one another, played the one-two pass off Luis Suarez and laser guided a left-footed shot that screamed in an outside-to-in arc past the bemused, and fully stretched, Jan Oblak.

Mario Hermoso put his head in his hands, Felipe leaned down to beat the turf, Oblak booted the ball away in impotent fury. As for Simeone? He started to go into arm-waving, voice-shredding defiance mode, realised he’d witnessed utter footballing genius and … he applauded. The whole thing was absolutely amazing and a microcosm of the nine-year grip Barcelona have exerted on this fixture while winning five League titles to Atleti’s one.

I call their rivalry ironic, because just imagine if Messi’s “Holy Grail” task of trying to win Argentina the World Cup had a young Simeone behind him in midfield. Or if Simeone the coach had been at the helm for Argentina during Messi’s golden years.

They are perfect partners in both those respects, but seem doomed to be respectful foes, with one of them distinctly holding the upper hand. But now, things are different — or at least Simeone, Oblak, Felix, Koke and Marcos Llorente need to make it so. That the game is on a Saturday after the usually impactful international break, slightly favoured Atleti, at least until Suarez tested positive for COVID-19.

Atletico are at home, thus avoiding any further travel: they’ll get to face Messi when he’s, at best, tired and jet-lagged.

Peru vs. Argentina finished around 3:30 a.m. on Wednesday morning, Spanish time. With general post-match faffing-about and an absolute minimum flying time of 13 hours while Messi travels direct from Lima to Barcelona in a private plane, carrying Lucas Ocampos, Guido Rodriguez and Nehuen Perez back to their various La Liga clubs, he’ll be landing in his home city in the early evening, not far short of 72 hours before events at the Metropolitano kick off.

What a blow that this will not be the first time that Messi and Suarez have faced one another in club football. Suarez has played against Kozakken Boys, Libya, FK Gomel and Tahiti more than he’s faced FC Barcelona (once each and zero respectively). Yes, he’s 34 in January and would have had the same threat of tiredness, jet-lag as Messi, in addition to a tougher match against Brazil. Yet this was to be his first chance to stick it to those at Barcelona, even those who’ve recently abandoned the club, who didn’t think him worth retaining. Would you have bet against him scoring?

Sid Lowe explains how Atletico Madrid’s addition of Luis Suarez has brought out the best in Joao Felix.

Perhaps we’ve moved into Antoine Griezmann territory now. He broke his drought, against Real Betis, last time out and instead of Suarez, it’s the Frenchman who has a glaring chance to damage his former club. But Atleti, to me, look favourites here. They’re driven by a mix of needing to win and it seems, the knowledge of how to do it. More than that, I reckon that the addition of Geoffrey Kondogbia just made Atleti title favourites.

Their midfield, already ferocious, now has the figurehead who can win tackles and drive forward into the spaces where matches are won. He’ll also add an aerial threat, the odd goal and has a pretty good record against Barcelona, losing two of his last seven matches against them.

With no Ansu Fati or Sergio Busquets for the Catalans, and only one point gained from their last six available away from home, with Marc-Andre ter Stegen working absolute overtime in order to keep opponents from scoring — this truly needs to be the moment when Atleti survey the arriving force from the north and decide that they can, and will, impose themselves.

Back when Simeone marched Atleti to the title six years ago, his mantra was “one game at a time” in reference to never getting ahead of themselves. This season, with a glaring chance of repeating that La Liga triumph, this single match in November can’t be anywhere close to title crucial. But victory would leave them nine points clear of Ronald Koeman’s side and would also become a hugely important building block in Atleti’s self-confidence and determination.

Contrastingly, if this isn’t the moment to put Barca to the sword after years of trying and failing to do so in La Liga, then … when Simeone, when?