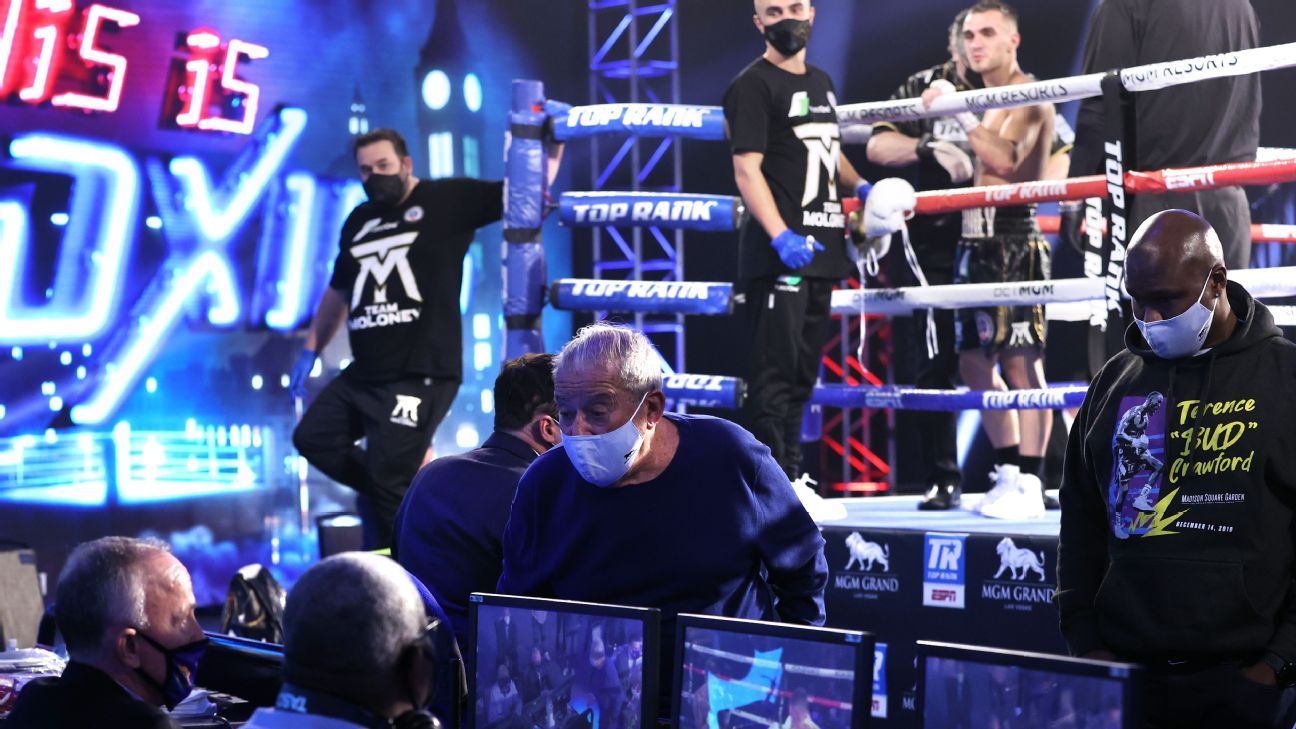 Bob Bennett was sitting ringside at the Hard Rock Hotel and Casino in Las Vegas for an IBF super middleweight title bout between James DeGale and Caleb Truax. It was April 7, 2018.

In the third round, a bad cut opened up just above DeGale’s right eye. In the ring, referee Robert Byrd initially ruled that the cut had come from a punch. But the sequence happened right in front of Bennett, the Nevada State Athletic Commission (NSAC) executive director. It was clear, Bennett said, that DeGale’s cut was caused by an accidental clash of heads.

Immediately, Bennett got a foreboding feeling in the pit of his stomach. It’s the job of athletic commissions — the regulatory bodies for combat sports — to impose a fair and equitable contest. This was a pivotal fight, too. DeGale was trying to win back the title he lost to Truax four months earlier in what was one of the biggest upsets of 2017.

“My stomach turned inside out,” Bennett told ESPN. “I thought, DeGale is never going to be able to make the end of the fight and it’s gonna be a controversial finish. And the young man would have been correct [about the cut being due to a head clash]. We’re supposed to be getting these things right. It f—ing sickened me.”

Things ended up working out that night. DeGale fought through the blood and won a unanimous decision to win back his belt. But Bennett decided then and there that something needed to change in Nevada — he was going to make a push to implement regulations for instant replay in a state that routinely holds the most high-profile boxing events.

“I have the utmost respect for them, but referees can’t see everything,” Bennett said. … “We’re the only sport not doing [replay].”

Beginning a little more than a year ago, the NSAC has gradually rolled out its boxing instant-replay rules, making some changes along the way. Nevada’s use of replay in boxing came into the spotlight last Saturday night for the first time in a controversial, no-decision finish to a WBA junior bantamweight title bout between Joshua Franco and Andrew Moloney in Las Vegas.

The procedures were panned, particularly by Top Rank president Bob Arum, who promoted the event. Arum said he was “disgusted” that instant replay didn’t overturn the call in the ring despite a 26-minute delay. Bennett, though, is undeterred. Instant replay might not be in its final form, but it is very much here to stay in the boxing capital of the world.

“This is done strictly in the interest of the fighter — to get things right for the fighter,” Bennett said. “We’re going into some uncharted waters.”

After DeGale vs. Truax, Bennett went to his boss, NSAC chairman Anthony Marnell III, about the idea of instant replay. Marnell, Bennett said, was on board from the beginning.

In order for replay to work, the commission also needed cooperation from boxing’s broadcasters to provide that capability — headsets, monitors, etc. — in real time. So, Bennett reached out to producers from ESPN, Showtime and Fox. All were amicable to the idea.

“It was a collaborative, team effort,” Bennett said.

Perhaps the most high-profile early instance of instant replay in Nevada was a fight between Tyson Fury and Otto Wallin on Sept. 14, 2019. Wallin opened up a cut over Fury’s right eye in the third round. It was unclear in real time whether it came from a punch or a clash of heads. While the fight continued, Bennett and Nady consulted the replay and determined that it was from a punch. They relayed that to Weeks, the in-ring referee, in between rounds. Weeks had initially said it was from an accidental headbutt.

The corners, though, were not told that the commission determined the cut came from a punch. They were operating under the impression that it was a clash of heads and if the bout had been stopped it could have been a no-decision, because it was due to an accidental foul before completing four rounds. The cornermen found out that the cut was due to a punch only when informed by ESPN reporter Bernardo Osuna mid-fight.

“We dropped the ball,” Bennett said.

That led to the commission going back to the drawing board a bit to develop the procedures that are in place now — ones that include a yellow light to let onlookers know something is being reviewed and better communication between the review official, the referee and the corners.

The yellow light is placed on the commission table and the ring apron, in sight of the referee, judges, timekeepers, inspectors, corner people and commentary team. When the light goes on, the referee pauses the action and sends both fighters to neutral corners. The review official makes the final decision after consulting with the referee, who then communicates that decision to the principals involved.

Referees can also request an instant replay review themselves via a hand signal or consult with the review official at any time during a bout. The referee is still the sole arbiter when it comes to determining whether a foul is intentional or not. The barrier when it comes to replay is that the review official has to have conclusive evidence to overturn a call made by the in-ring referee.

Since implementing these rules right before the start of the coronavirus pandemic, Bennett said 10 to 12 calls have been justly overturned via instant replay. One example came in a bout between Arnold Barboza Jr. and Alex Saucedo on Oct. 17. In the seventh round, Barboza fell to the mat in a wild sequence. It was initially ruled a slip, but after review it was reversed to a knockdown.

There was a pause in the action to look at the replay, which was criticized by pundits. But Bennett said the top priority will always be to make the correct call.

“We want to be as low-profile as we can be and not interrupt the flow of the fight,” Bennett said. … “The bottom line is to get it right.”

That time element came into play last Saturday. Byrd, the assigned review official for the Top Rank event at MGM Grand, and Bennett looked at the replay for 26 minutes before eventually upholding referee Russell Mora’s in-ring call: a no-decision.

Franco vs. Moloney was stopped after the second round by ringside physician Raimundo Leon due to bad swelling around Franco’s right eye. Mora had ruled that the swelling came from at least one clash of heads in the first round, therefore the damage that led to the fight finish was due to an accidental foul. Moloney and his team vehemently argued that Franco’s eye swelling was the result of punches, specifically several jabs to the area in the first and second rounds.

“That eye was closed by 50 jabs,” Moloney, who was trying to regain the title he lost to Franco back in June, said Saturday. “That’s why his eye is shut — not the headbutt. There’s no headbutt. I can’t believe they took this away from me. I’ve trained my ass off for the last five months, been away from my family, and they just take it away from me. I can’t believe they didn’t give it to me. That’s why they have instant replay working right now.”

Arum piled on, saying afterward that his solution would be to “get the f— out of Las Vegas.” Moloney’s attorney Josh Dubin filed an appeal with the NSAC on Wednesday.

“[The commission] waited until the end of the fight and they kept with it to protect the referee who didn’t know what the hell he was doing,” Arum told Fight Hype. “I am absolutely disgusted … I just want a fair adjudication, they made a mistake, the referee made a mistake. It’s clear, it’s not even close.”

Bennett declined to comment to ESPN specifically on the Franco vs. Moloney situation. But he did speak Monday on the “TC Martin Show” on local Las Vegas radio. In that interview, Bennett said he stood by the call and that the replay showed there were two instances of head clashes in the first round.

“There’s no doubt that the jabs added to [the damage],” Bennett said. “But nobody made reference to Franco’s right eye being on the top of Moloney’s head [in the first round] and I’ve got 14 frames [of video] sitting in front of me that clearly depicts that. The fact that there wasn’t a headbutt is totally false.”

In addition, Bennett said that he and Byrd were not looking at the instant replay for 26 minutes without making a determination. The NSAC executive director said he told Top Rank ring announcer Mark Shunock right away that Mora’s call would be upheld. The 20-plus-minutes following that, Bennett said, were to get more looks since headliners Terence Crawford and Kell Brook were not yet ready to walk to the ring.

“When people say it took 20, 25 minutes to get the results, they’re wrong,” Bennett said. “I gave it to Mark and Mark didn’t report it, obviously, because somebody didn’t want him to.”

“For him to accuse us of looking to take care of the referee and cover for the referee, it’s totally ludicrous,” Bennett said.

Top Rank media relations director Evan Korn said he was standing right next to Shunock the entire time after Franco vs. Moloney ended and “at no point” during the 26-minute review did anyone instruct Shunock to read the decision.

“Mark was doing his job, which is to convey the result of the bout,” Korn told ESPN. “The ultimate result of the bout was not made clear until the lengthy review was completed. … To imply that Mark delayed the announcement for any other reason than to get it right is irresponsible to say. Mark is an excellent ring announcer who did his job and waited until a final decision was rendered. Final decisions can’t be rendered while an extensive review process involving multiple officials is still going.”

It’s clear there are growing pains. Instant replay is not a new concept in combat sports. New Jersey has had a version of it since 2007. The Unified Rules of MMA call for availability of instant replay in fight-ending sequences. The idea still has its detractors, too.

Some critics feel that replay takes necessary power away from the referee in the ring. Nevada referee Robert Hoyle disagrees. A former high-school and junior-college football referee who used replay in that sport, Hoyle said it actually gives him “an extra sense of security.”

“I still have to be in the right place,” Hoyle said. “When it comes down to a guy taking too much damage, that’s only my call. But when it comes to those little things — it’s not the big things in boxing — it’s always these little things that make the news.

“I would say [the review official is] actually adding value to what I’m doing in the ring. Believe it or not, they’re actually refereeing alongside me.”

Bennett acknowledges Nevada’s instant-replay rules will be adjusted as things progress. He wrote in an email to the Association of Boxing Commissions and Combative Sports (ABC) in September that “the NFL first experimented with instant replay in 1976 and are still improving their procedures to date.”

Still, he feels that the way things are being done now are a net gain compared to the past. If you don’t believe instant replay can be effective in boxing, Bennett said, “you’re living in yesteryear.” He doesn’t want to have that feeling of powerlessness again, like the one he experienced during that 2018 fight between DeGale and Truax.

“Even though we’re still in the infancy stages, it’s better than what it was,” Bennett said. “Is it finished? Is it perfect? No.”