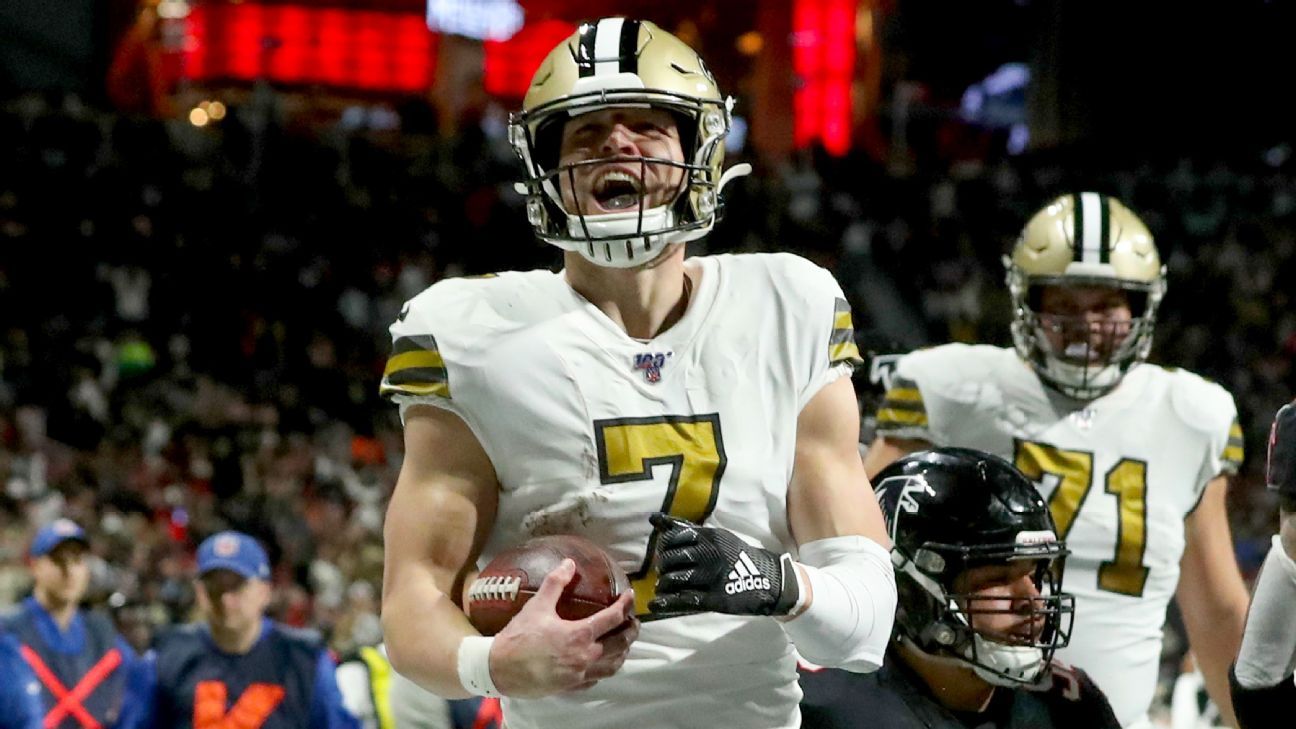 METAIRIE, La. — The New Orleans Saints plan to start Taysom Hill at quarterback ahead of Jameis Winston on Sunday against the Atlanta Falcons, a source told ESPN’s Adam Schefter.

Hill took all the starter reps at practice this week, according to the source. A source also told ESPN’s Dianna Russini that Winston will not be part of any offensive packages unless needed because of injury.

The move comes as a mild surprise, since Winston is more experienced and was the one who replaced Drew Brees during the second half of last Sunday’s 27-13 win over San Francisco 49ers after Brees suffered cracked ribs and a punctured lung.

The Saints’ decision is a reminder that coach Sean Payton and team executives have always maintained that Hill could be a starting NFL quarterback. They backed up that belief by signing him to a two-year, $21 million contract extension as a restricted free agent this offseason.

Hill, who was a dual-threat quarterback at BYU from 2012 to 2016, has carved out a unique role with the Saints over the past four seasons as a read-option QB/RB/WR/TE/FB/special-teams specialist.

He has completed just 11-of-20 passes in his career, including the playoffs, for a total of 255 yards with no touchdowns and one interception. Hill, 30, has not thrown a touchdown pass since Nov. 26, 2016 in his final season at BYU.

Hill played seven snaps at quarterback in the second half of last Sunday’s win, running the ball on five of them for a total of 31 yards. He lost a fumble on his final carry and was sacked once.

He has lost two fumbles this season and three in his career.

Payton has declined to answer any questions about the Saints’ quarterback plans this week, saying that wouldn’t help his team strategically — though he is scheduled to talk after Friday’s practice.

It’s unclear if the Saints are committed to using Hill throughout Brees’ injury absence (no timetable has been set for Brees’ recovery) or if they plan to evaluate both of their backup QBs at some point. But this time period will serve as a valuable evaluation for their future, as well, since the 41-year-old Brees could potentially retire after this season.

The Saints signed Winston to a one-year deal worth $1.1 million plus incentives this offseason. Payton and teammates have credited Winston for his attitude, leadership and his development throughout the season. He completed 6 of 10 passes for 63 yards last week with no TDs or turnovers — though he did throw one pass that was nearly intercepted.

Hill has become one of the NFL’s most fascinating and polarizing players, since his ability to function as a NFL quarterback is still so unproven. Hill is already 30 years old since he went on a two-year church mission after high school and spent five years in college. He originally signed with the Green Bay Packers as an unrestricted free agent in 2017 before the Saints claimed him on waivers because Payton was so impressed by his preseason performance.

Hill initially broke out with the Saints in 2017 as a special teams coverage ace, but his offensive role has expanded each year since then. His best performance came in January’s playoff loss to the Minnesota Vikings, when he completed one pass for 50 yards, ran the ball four times for 50 yards and caught two passes for 25 yards and a touchdown.