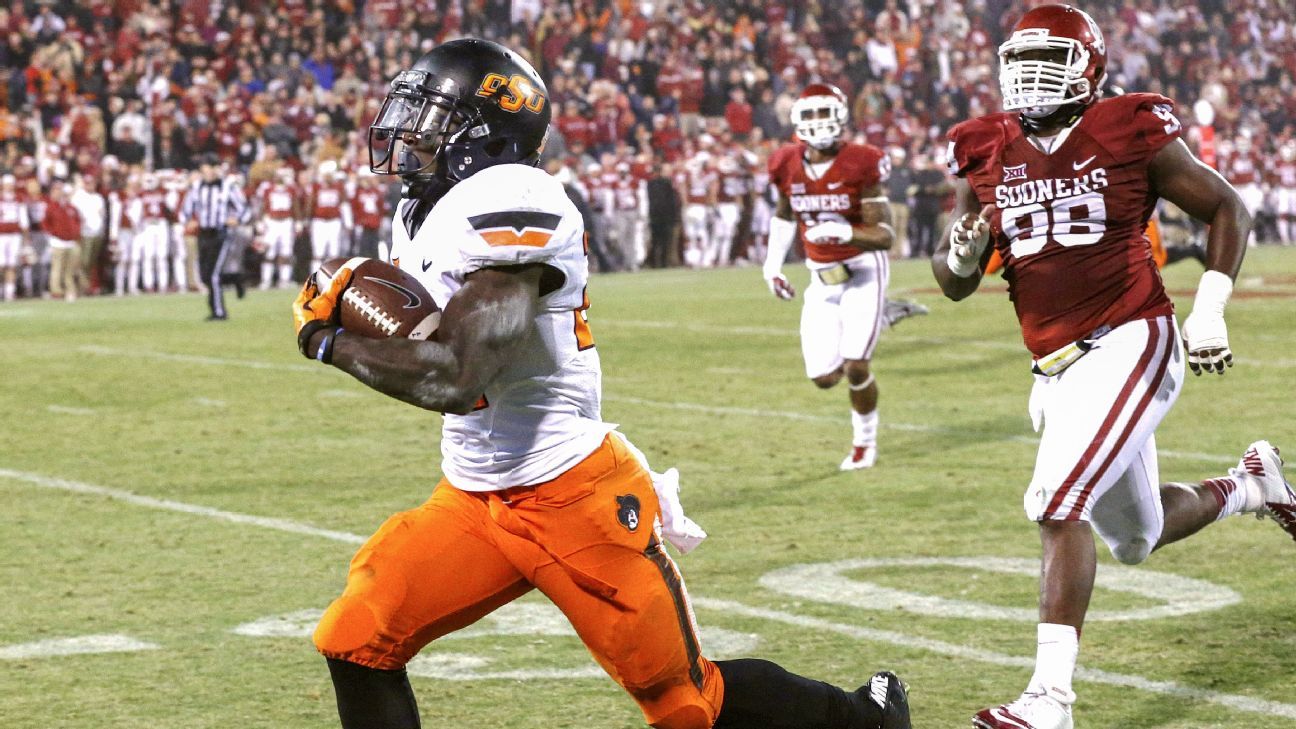 In college football, that word evokes thoughts of big plays, dramatic finishes and high stakes in one of the sport’s best rivalries: Oklahoma vs. Oklahoma State.

Saturday will mark the 115th meeting between the two teams (7:30 p.m. ET, ABC), a series that is lopsided in Oklahoma’s favor, historically, with the Sooners leading 89-18-7. Despite that mark, the 21st-century Bedlam games have often been thrilling affairs with jaw-dropping moments and, usually, conference and/or national implications. It has become a regular stop for College GameDay, which will originate from the series’ location for the seventh time this weekend.

This time around, both teams are still in the hunt for a spot in the Big 12 championship game, so a win is crucial.

Before the latest edition, let’s take a look back at some of the wildest games in the series’ history:

The 1988 edition of Bedlam was a true classic, with several dramatic moments in the final stanza. After a touchdown by eventual Heisman Trophy winner Barry Sanders gave Oklahoma State a four-point lead, the Sooners marched downfield to take it back. But the drive was riddled with mishaps.

Inside OSU territory, Sooners quarterback Charles Thompson pitched the ball to halfback Anthony Stafford, but the ball bounced off Stafford and onto the turf. Just before three orange jerseys could converge, Stafford pounced on it to keep possession. On the next play, Thompson threw a swing pass to freshman Mike Gaddis, who was hit hard and fumbled, but OU lineman Mark Van Keirsbilck jumped on it before roughly a half-dozen Cowboys could, setting up fourth-and-inches.

Thompson took the snap and turned around for a handoff. But Stafford and Gaddis collided, then Stafford bumped into Thompson. The crash sent Thompson forward a yard, just enough for the first down to keep the drive alive. Three plays later, Thompson ran in an 18-yard keeper for a three-point OU lead with 2:33 left.

The Cowboys had one more chance, and quarterback Mike Gundy connected with wide receiver Hart Lee Dykes for a few big gains, with some Sanders’ runs sprinkled in, to get OSU in scoring position. An iffy personal foul penalty called on Oklahoma State turned a would-be fourth-and-1 into a fourth-and-16 at the OU 34 with 51 seconds left. OSU fullback Garrett Limbrick and OU linebacker Richard Dillon were engaged, and the action carried out of bounds; yet Lee Corso — the color analyst for the game — said, “Unless you’re absolutely positive, don’t call anything like that to disrupt a great game like this.”

Undeterred, Gundy took the fourth-down snap, rolled right, planted and launched a missile into the end zone, where an open Brent Parker had slipped behind the Sooners’ defense. The ball went off Parker’s arms … and bounced to the turf. Before Parker hit the ground himself, he had already begun grabbing his helmet in agony. The Sooners would win.

Evidence of the long-held rivalry cliché “throw the records out” rang true in this one. The Cowboys were 3-7 coming into this game, while the reigning national champion Sooners were 10-1. And first-year OSU coach Les Miles was playing a true freshman at quarterback, Josh Fields.

In what was a tight contest throughout, OSU trailed by four with less than two minutes remaining. T.D. Bryant made a highlight-reel catch on third-and-7 to keep the Cowboys alive and put them in the OU red zone. Then, with 1:36 left, Fields pump-faked and threw a fade to Rashaun Woods, who hauled it in for the game-winning touchdown.

A Hail Mary toss by OU’s Nate Hybl was intercepted in the final seconds, and OSU had shocked the Sooners, knocking them out of the national championship and the Big 12 title game in one swoop. The next season, OSU beat OU again in Bedlam and the Cowboys went to a bowl game, kicking off a run of 17 bowl appearances in 18 seasons after appearing in just one in the previous 13 campaigns.

Oklahoma led by a touchdown with less than 70 seconds left when an unforgettable sequence occurred. On fourth-and-long, the Sooners punted to Oklahoma State return specialist Tyreek Hill — yes, that Tyreek Hill — and he fair caught it at his own 15-yard line.

But OSU defensive back Jordan Sterns was flagged for running into the punter. The Sooners moved up 5 yards and again punted to the speedy Hill. Big mistake. Despite two Sooners defenders each within three yards of him, Hill did not fair catch it the second time. He fielded it cleanly at the 8-yard line then zigged, zagged and accelerated through the Sooners’ coverage team and into the end zone for a game-tying touchdown. As Hill dashed the final 25 yards toward the goal line, play-by-play commentator Joe Davis yelled, “THIS … IS … BEDLAM!”

In overtime, the Sooners missed a field goal attempt, but OSU’s Ben Grogan made his, and the Cowboys became bowl-eligible.

The Cowboys came into this game ranked No. 6 nationally and were on the verge of clinching their second Big 12 championship in three seasons, needing just a win over the Sooners to do it.

The Sooners played three quarterbacks — Trevor Knight, who left with an injury, Kendal Thompson and eventually Blake Bell — and it was a Bell pass that became a focal point in the final minute. OSU cornerback Justin Gilbert appeared for a moment to have intercepted a jump ball from Bell in front of OU wideout Lacoltan Bester, but as Bester and Gilbert hit the turf, the ball popped loose and was ruled incomplete.

With 19 seconds left, Bell found wideout Jalen Saunders in the right corner of the end zone for the winning touchdown. During OSU’s final play, a series of laterals in hopes of a miracle score, OU’s Eric Striker recovered a fumble for a touchdown as time expired.

Heisman Trophy winner Baker Mayfield (school-record 598 passing yards) and Mason Rudolph (448) had a quarterback duel for the ages. Oklahoma’s Marquise Brown caught nine passes for a school-record 265 yards, and his efforts at one point prompted play-by-play man Gus Johnson to yell, “Hollywood! … Who is this kid?!? Where’d he come from?!?”

And even with all that offense, it was a pair of defensive plays that provided the late drama: As Oklahoma led 55-52, OSU linebacker Chad Whitener intercepted Mayfield at the goal line to keep OSU in it. But on the ensuing drive, Rudolph was picked off by OU’s Robert Barnes, and that squelched the Cowboys’ hopes. Trey Sermon’s late touchdown run sealed the win for the Sooners.

• 2000, Oklahoma 12, Oklahoma State 7: Leading by five points with under four minutes to go, Oklahoma defensive back Derrick Strait knocked away a fourth-down pass by OSU quarterback Aso Pogi in the end zone, preserving a victory in what would eventually be a Sooners national championship season.

• 1983, Oklahoma 21, Oklahoma State 20: Oklahoma State led 20-3 in the fourth quarter, but the Sooners — without Marcus Dupree, who left the team a week before — rallied back with the help of an onside kick recovery and a 46-yard Tim Lashar field goal.

• 1995, Oklahoma State 12, Oklahoma 0: Oklahoma State recorded a miniscule 41 offensive yards in the final two quarters and still shut out the Sooners. It would be the only Bedlam game then-OU coach Howard Schnellenberger would be a part of; his stint ended after the 1995 season.

• 1985, Oklahoma 13, Oklahoma State 0: This is Bedlam’s version of the “Ice Bowl,” as the teams played in subzero wind chill. The green turf was virtually invisible because of the ice sheet. OU went on to win the national title.

• 2012, Oklahoma 51, Oklahoma State 48: One year after Oklahoma State smacked OU 44-10 en route to a Big 12 championship and the Fiesta Bowl, the Sooners won in an overtime thriller. “The Belldozer,” Blake Bell, scored a game-tying touchdown with four seconds left, and Brennan Clay broke multiple tackles for the winning touchdown run in OT.

• 1969, Oklahoma 28, Oklahoma State 27: Heisman Trophy winner Steve Owens registered a then-NCAA record 55(!) carries for 261 yards for the Sooners, but it was OU’s Albert Qualls’ sack of OSU quarterback Bob Cutburth on a late two-point conversion try that sealed the win for the Sooners.

• 1976, Oklahoma State 31, Oklahoma 24: Barely a minute into the game, tailback Terry Miller scored a 72-yard touchdown for OSU, but the Sooners eventually took an 11-point advantage. The unranked Cowboys then scored 18 straight points, including 10 in the final seven minutes, to overtake No. 5 OU and secure their first Bedlam victory in a decade.

• 2008, Oklahoma 61, Oklahoma State 41: At the time, the highest-scoring Bedlam (now second behind the 2017 tilt) came in the midst of a heated Big 12 race. Sam Bradford threw for 370 yards and four TDs in a win that sent OU to the famous three-way tie that allowed them into the Big 12 championship (and, later on, the BCS National Championship game).