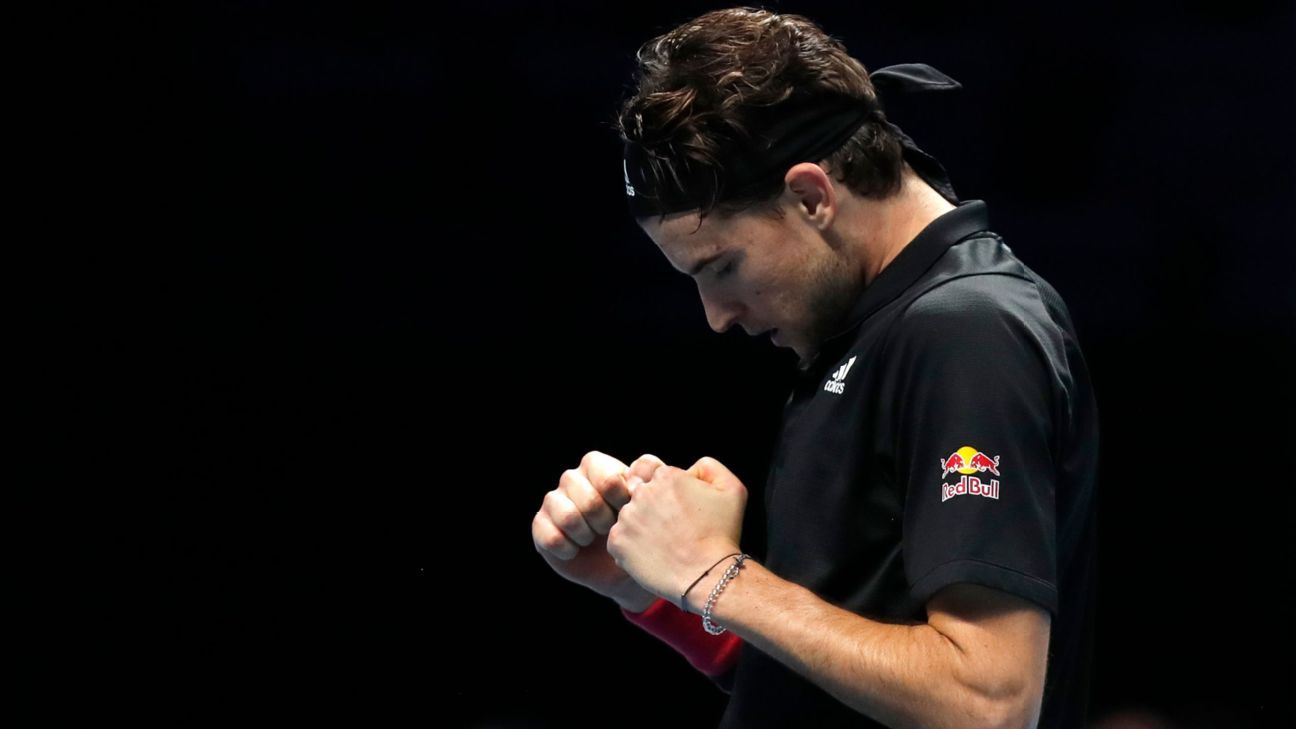 LONDON — Dominic Thiem thought winning his first Grand Slam title at the US Open would make him calmer in the tensest moments of the biggest matches. He realized in his ATP Finals showdown with No. 1 Novak Djokovic how wrong that notion was.

Still, after frittering away four match points in their semifinal Saturday because he was “tight and nervous” during a second-set tiebreaker, Thiem gathered himself. He eventually reeled off seven of the match’s last eight points to get to the final of the season-ending championship.

“What he did from 0-4 in the third-set tiebreaker was just unreal,” said Djokovic, a 17-time Grand Slam champion. “I don’t think I played bad. … He just crushed the ball and everything went in.” When it ended with Djokovic sailing a forehand long, Thiem dropped his racket and covered his face with his hands.

Thiem could have closed things more than an hour earlier. But in the earlier tiebreaker, Thiem acknowledged, “I was mentally not that strong.”

His 300th career match win put him in the final of the season-ending tournament for the second straight year; he was the runner-up to Stefanos Tsitsipas in 2019.

No. 2 Rafael Nadal was scheduled to face No. 4 Daniil Medvedev in the second semifinal. None of the last three men in the field has won the tournament, meaning there will be a sixth different champion over the past six years, the longest such stretch since 1974-79.

It’s the first time since 2004 that the top four players in the rankings filled the four semifinal slots for the ATP Finals. This year’s group is quite a quartet: They won the past 10 Grand Slam titles and the past nine Masters 1000 trophies.

Djokovic, already assured of finishing the year ranked No. 1 for a record-tying sixth time, was trying to match Roger Federer‘s mark of six ATP Finals trophies.

In Saturday’s rematch of February’s Australian Open final, in which Djokovic beat Thiem in five sets, there were plenty of long baseline exchanges on the indoor hard court — where things were quiet because spectators were banned due to the coronavirus pandemic — and few break chances for either player.

Thiem faced three break points and saved them all, quite an achievement against supreme returner Djokovic. And while Thiem managed to produce only a pair of break points, he used one of those to take a 6-5 lead in the opening set.

In the second, Thiem’s ace put him ahead 6-5 in the tiebreaker, one point from victory.

But Djokovic saved that initial chance with a 127 mph service winner. Thiem’s next opportunity to win came at 7-6, but he double-faulted.

“I was, like, so tight in my whole body,” Thiem said. The third was at 9-8, when he pushed a down-the-line forehand wide. At 10-9, Djokovic erased No. 4 with a forehand that landed right on a line.

That began a three-point run by Djokovic to steal the set and prolong the match.

Thiem regrouped, though, to become only the second man with at least five victories each against the Big Three of Djokovic (5-7 career mark), Federer (5-2) and Nadal (6-9). Andy Murray is the other.

“That is super special to me,” Thiem said. “Every single match against them is a huge privilege. It’s a huge opportunity to learn. If you beat these guys, it gives you a huge boost of confidence.”