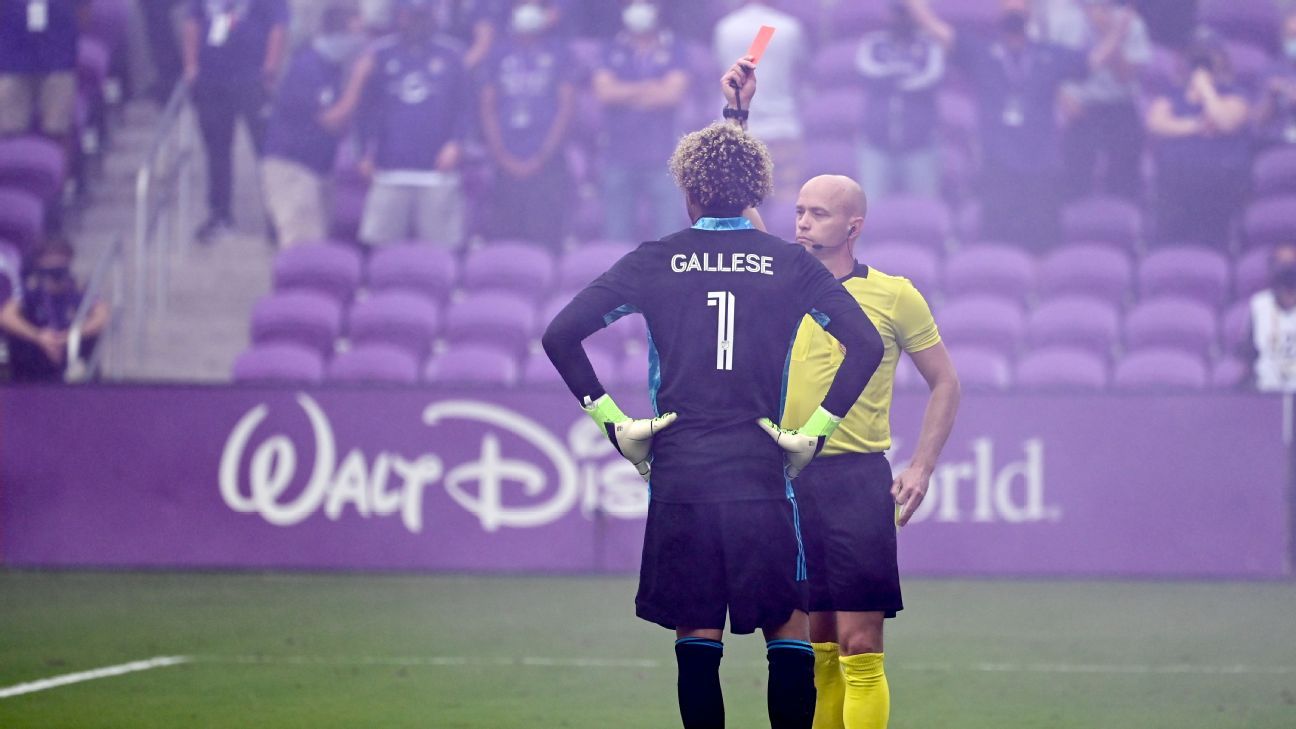 The Professional Referees Organization, which makes referee assignments in North America, including MLS, has defended referee Allen Chapman’s handling of the end of the first round MLS Cup playoff match between Orlando City SC and New York City FC.

– MLS Cup playoff preview: Depth will be tested in postseason
– MLS on ESPN+: Stream LIVE games and replays (U.S. only)

After extra time ended 1-1, the two teams proceeded to a penalty shootout. Orlando keeper Pedro Gallese appeared to hand the Lions a 4-3 shootout victory when he saved Taty Castellanos’ shot, but VAR deemed that Gallese had left his line early. He was subsequently booked, and because it was his second caution, he was sent off.

Orlando backup keeper Brian Rowe attempted to convince Chapman that he could be substituted in, and initially it looked as if the substitution would be allowed. But after consulting with the rest of the refereeing crew, Chapman decided that only a player who had been on the field at the end of extra time could deputize for Gallese.

Midfielder Rodrigo Schlegel was ultimately chosen to deputize for Gallese.

Castellanos subsequently converted the retake, and NYCFC goalkeeper Sean Johnson saved Nani’s attempt to bring NYCFC level. But in the seventh round, Schlegel became the hero, saving Gudmundur Thorarinsson’s attempt. Benji Michel then converted Orlando’s next shot to give the Lions the win.

But after the game, there was still considerable confusion as to whether Chapman had handled the situation correctly. The Laws of the Game changed in June 2019-20 to say a goalkeeper must have one foot on the line when a penalty is kicked. Any offence was a mandatory yellow card. But this led to several controversial incidents at the 2019 FIFA Women’s World Cup, where it was first used.

Major League Soccer is on ESPN+. Seattle is the reigning champion of the 26-team league, which added Nashville and Miami to the fold in 2020.
ESPN+: Live games and replays (U.S. only)
MLS home | Schedule | Standings

The International Football Association Board (IFAB), which oversees the Laws of the Game, offered special dispensation to leagues and competitions not to book a goalkeeper during a penalty shootout, to reduce the chance of him/her being sent off during a shootout.

IFAB amended the Laws of the Game for 2020-21 to state that a goalkeeper should be warned for the first offence, and booked for any subsequent infraction. In addition, yellow cards picked up during the course of the game do not carry through to the penalty shootout.

But MLS has been operating under the 2019-20 version of the Laws of the Game for entirety of this season. So while next season Gallese would go into the shootout without a yellow card and would not be booked for coming off his line either, that didn’t help him on this day.

“The MLS regular season started in March 2020 prior to the 2020/21 law changes coming into effect, and therefore the entire regular season was played under the provisions of the 2019/20 Laws of the Game, as are the current playoffs,” PRO said in a statement given to ESPN. “As such, when a goalkeeper encroaches from the goal line and does not have at least one foot on, or in line with, the goal line at the moment when a penalty kick is taken, or when a kick happens during kicks from the penalty mark to decide the winner of the game, if the kick is saved it must be retaken and the goalkeeper must also be cautioned.”

The statement added that Gallese “was correctly cautioned for the offense as per the 2019/20 Laws of the Game.”

In terms of the attempted substitution of Rowe, PRO indicated that Chapman’s ultimate decision was correct. PRO’s statement added, “The Laws of the Game only allow a goalkeeper who has been sent off during kicks from the penalty mark to be replaced by an eligible player, i.e. a player who was on the field of play at the end of extra time. As such, even though Orlando had not used their full allocation of substitutes, they were not able to bring a substitute goalkeeper into the game at that point, and Gallese had to be replaced in goal by a field player.”