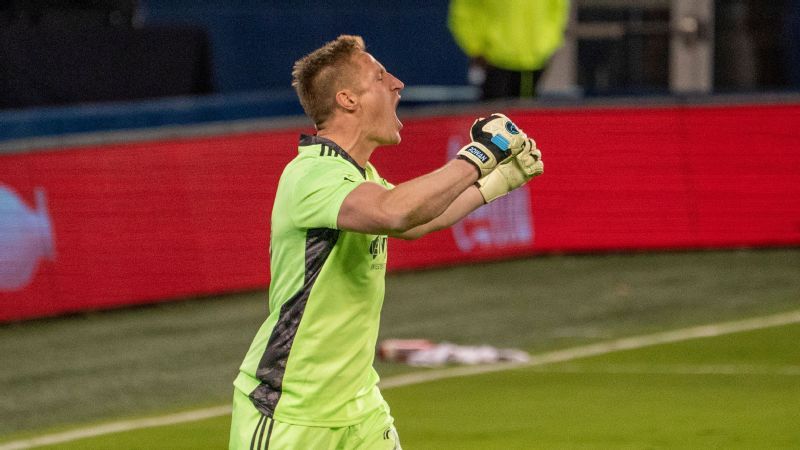 Tim Melia stopped all three penalty-kick attempts he faced as No. 1 seed Sporting Kansas City advanced with a shootout victory over eighth-seeded San Jose Earthquakes in the opening round of the MLS Playoffs.

Sporting converted all three of their penalty-kick attempts after regular time and 30 minutes of extra time ended in a 3-3 tie.

Gianluca Busio scored a goal in the first minute of stoppage time to put Sporting ahead 3-2 in what was scheduled to be an extra four minutes. But Chris Wondolowski, MLS’s all-time leading scorer, delivered on a header to tie the game 3-3 in the 97th minute in the final action of the second half.

Sporting’s Johnny Russell fed Gerso Fernandez, who drove toward the goal and then fed Khiry Shelton. Shelton deflected the ball to Busio, who was wide open in front of the net for the late lead.

Wondolowski tied it off a perfect pass to the front of the goal from Cristian Espinoza. Wondolowski also had a chance to put San Jose ahead in the 89th minute, but SKC Melia made a diving save.

After going to halftime down a goal, Sporting drew even in the 47th minute. Gerso took a corner kick that found a cluster of players in front of the San Jose net. Ilie Sanchez was credited with the goal that tied the game 2-2.

Roger Espinoza‘s goal in the fourth minute gave Sporting the early lead. Russell lofted a perfect pass from the corner to Espinoza, who headed in his third of the season.

The lead lasted just 18 minutes. Carlos Fierro collected a pass from Espinoza in the middle of the box and fired it toward the goal. It deflected off the head of defender Roberto Puncec and into the net.

Espinoza then fed Shea Salinas in the middle the box and Salinas scored his first postseason goal for a 2-1 San Jose lead in the 34th minute. That goal also deflected off Puncec.

Sporting had three shots on goal in the first 10 minutes of the first half but didn’t manage another shot until the 45th minute.