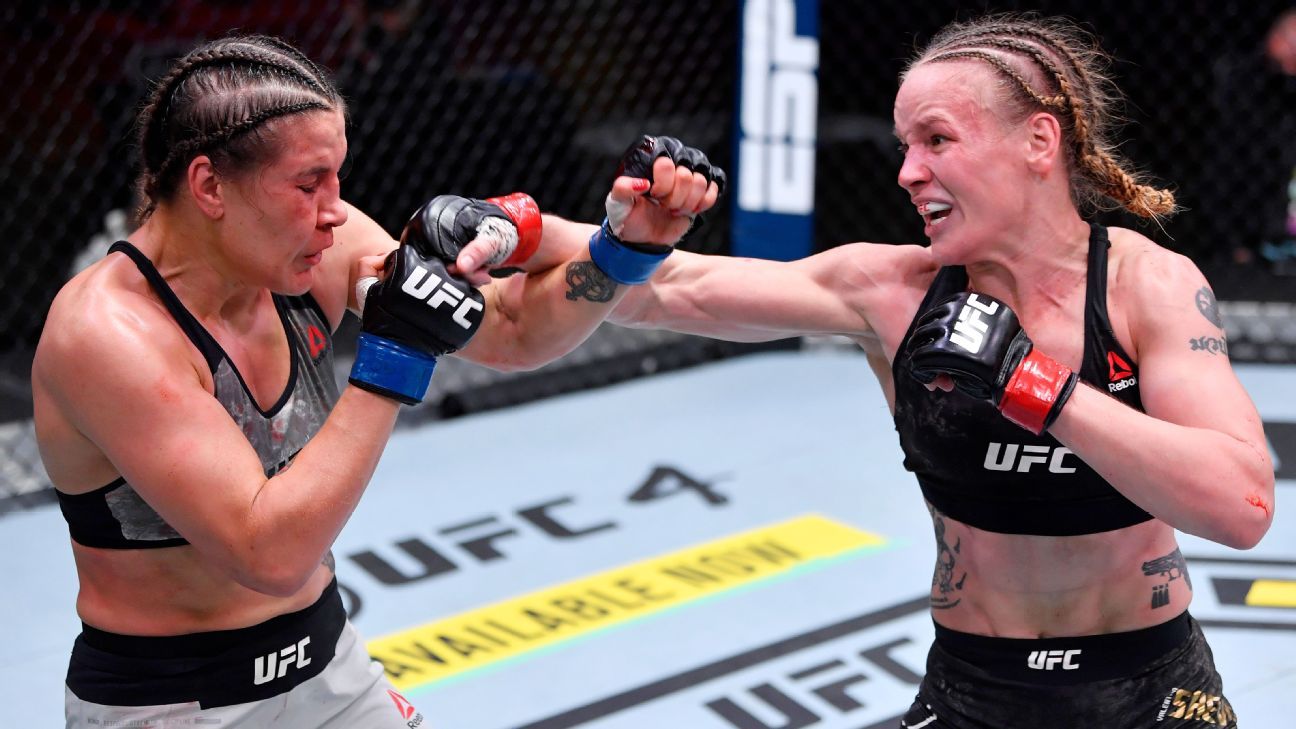 UFC women’s flyweight champ Valentina Shevchenko once again showed her brilliance in a unanimous-decision win over Jennifer Maia at UFC 255 on Saturday night in Las Vegas.

Things were a little dicey for Shevchenko through two rounds. She actually — gasp — lost the second round. But then Shevchenko used her precision striking to leave no doubt as to who is the finest women’s flyweight fighter in the world.

So, naturally, UFC president Dana White was asked during the postfight news conference about the next opponent for Shevchenko, who has successfully defended the 125-pound title four straight times. One would think a trilogy fight with two-division champ Amanda Nunes would have to be in consideration for 2021. Nunes has beaten Shevchenko twice, but some thought Shevchenko deserved the decision in the second one.

But White broached a different potential blockbuster for Shevchenko, who is expected to face Jessica Andrade next.

“I think the fight that makes more sense is … [Zhang] Weili is going to fight here soon, and after Weili fights, maybe you do those two,” White said. “But I don’t know.”

It’s likely Zhang will have to get past Rose Namajunas first, and that won’t be easy.

Meanwhile, the MMA world will be turning its full focus to the lightweights soon with Conor McGregor facing Dustin Poirier on Jan. 23. It seemed to make sense to put Tony Ferguson vs. Michael Chandler on that undercard in case White wants the winners of those two fights to face each other. Or even if one of the headliners had to pull out, there would be two strong possible replacements. But things didn’t quite work out that way, so Ferguson is facing the dangerous Charles Oliveira on Dec. 12 at UFC 256.

Real or not: A Shevchenko-Zhang fight is a better option than Shevchenko vs. Nunes 3.

Okamoto: I’m gonna disagree — because of timing. Shevchenko vs. Zhang is obviously a great fight, and stylistically, it probably does interest me a little more than a Shevchenko vs. Nunes trilogy. But the timing is all off here. Zhang has challenges. Rose Namajunas. Joanna Jedrzejczyk rematch. Yan Xiaonan. Tatiana Suarez (hopefully, if she’s able to get healthy). Strawweight is deep. There’s no reason for her to move up right now. Compare that to what’s left for Nunes.

Nunes has laid waste to pretty much every interesting challenger at 135 and 145 pounds. Plus, Nunes has hinted she might not fight for too much longer. She has flirted with the idea of retirement — on multiple occasions. If we were to never see Shevchenko fight Nunes again, it wouldn’t be the end of the world, but personally, I do want to see that fight. Badly.

I think Nunes has a firm grip on female GOAT status, but I also thought Shevchenko beat her in the rematch. And if Shevchenko were to beat her in the trilogy, and then return to 125 and possibly a superfight against Zhang … we might be calling her the GOAT when it’s all said and done. Give me that GOAT fight. Then give me the Zhang superfight if she’s still the champ.

Real or not: Ferguson should have waited to fight Chandler in January instead of fighting Oliveira in December.

Helwani: Ferguson was intent on fighting before the end of 2020, sources say. He liked the idea of beefing up the depleted UFC 256 pay-per-view card, much like he did in June 2019 when he added much-needed star power to UFC 238 by fighting Donald Cerrone. The problem this time around was two-fold:

2. The UFC told Ferguson’s team Chandler had already agreed to an opponent and he was not available to fight, sources said.

So, the decision was kind of made for Ferguson. Weird turn of events, considering the UFC wanted to book Ferguson vs. Chandler at UFC 254, but for whatever reason, Ferguson-Chandler wasn’t in its plans for December/January.

As a result, since the matchup was not on the table anymore, I think Ferguson made the right call here: He gets to fight before the year ends, he helps beef up a PPV (again), and if he beats the blazing-hot Oliveira — who has won seven in a row — he’s right back in the mix at 155. A win-win-win for Ferguson, even though you could make a strong case Oliveira is a tougher opponent than Chandler right now.

Real or not: Leon Edwards is too big of a jump up in competition for Khamzat Chimaev, whose hype train will be derailed temporarily.

Leon Edwards describes his 2020, which will finish with a fight vs. Khamzat Chimaev on Dec. 19.

Wagenheim: Every logic-driven synapse firing away inside my brain is screaming, “Real! Real! Real!” And yet …

This is 2020, a year that has defied all expectation and turned everything we think we know on its ear. And this is Chimaev, whose violent burst upon the scene has swiftly built a momentum grander than what would seem feasible in normal times. Anything is possible now, right?

Maybe so, but I am not one to become carried away by flavor-of-the-month puffery. Edwards, a veteran of 21 professional bouts who is riding an eight-fight winning streak in the UFC, the most recent victory coming against a former champion, should be way too much to handle for a newbie with just three years of MMA training under his belt. As recently as four months ago, Chimaev had never set foot inside the Octagon. Yes, he was spectacular in his UFC debut in July and no less so in his two victories since then. But none of his conquests were at anywhere near the level of competition faced by Edwards, who is No. 4 in the ESPN welterweight rankings.

It’s a positive for Chimaev that he has been the far more active fighter of late — Edwards has not competed since July 2019. However, Chimaev has not truly been tested in his three UFC bouts. He has controlled every second of every fight, which sounds like a good thing until you’re left wondering what happens when he doesn’t get to play the front-runner. Edwards is fully capable of taking him into the deep end of the pool, and Chimaev’s highlight reel includes no footage of him fighting his way out of trouble. I say Edwards derails the Chimaev hype train and sends it flailing in a sink-or-swim learning experience.

Real or not: A.J. McKee is destined to be a champion, maybe in more than one promotion.

This submission from the bottom by @ajmckee101 is unbelievable 😳

Raimondi: There’s no doubt. Last Thursday night, McKee managed to finish Darrion Caldwell with a submission that even some Brazilian jiu-jitsu black belts had never seen before. The 25-year-old prodigy from Long Beach, California, snared Caldwell in a neck crank, controlling his head and shoulder from bottom position and torquing on them. It was either a 10th Planet Jiu-Jitsu variation of what is called the “100 Percent” position or an old-school catch wrestling move. Anyway you slice it, McKee pulled off something rare and incredible. And he did it against Caldwell, a former two-time Bellator bantamweight champion and NCAA Division I national champion wrestler.

McKee earned his way into the finals of the Bellator Featherweight World Grand Prix with the victory. In that fight, he will also compete for the Bellator featherweight title. He’ll face the winner of a bout between champion Patricio “Pitbull” Freire and Emmanuel Sanchez sometime in 2021. McKee’s tournament run looks like this: an eight-second knockout of Georgi Karakhanyan, a slick third-round armbar against Derek Campos and that neck crank win over Caldwell. What a truly spectacular run. If “Pitbull” beats Sanchez, a matchup between him and McKee would be one of the most relevant fights in Bellator history. Freire is also the Bellator lightweight champ and ESPN’s No. 4 featherweight in the world.

If McKee can somehow win this grand prix and become Bellator featherweight champion — which is certainly a possibility — the sky is the absolute limit for him. He’s already one of the best young MMA fighters on the planet — voted the top MMA fighter under 25 in 2019 — but he’s on the verge of becoming a star. When his contract comes up, there will surely be no shortage of suitors, including the UFC, and he’s destined to make a whole lot of money eventually.