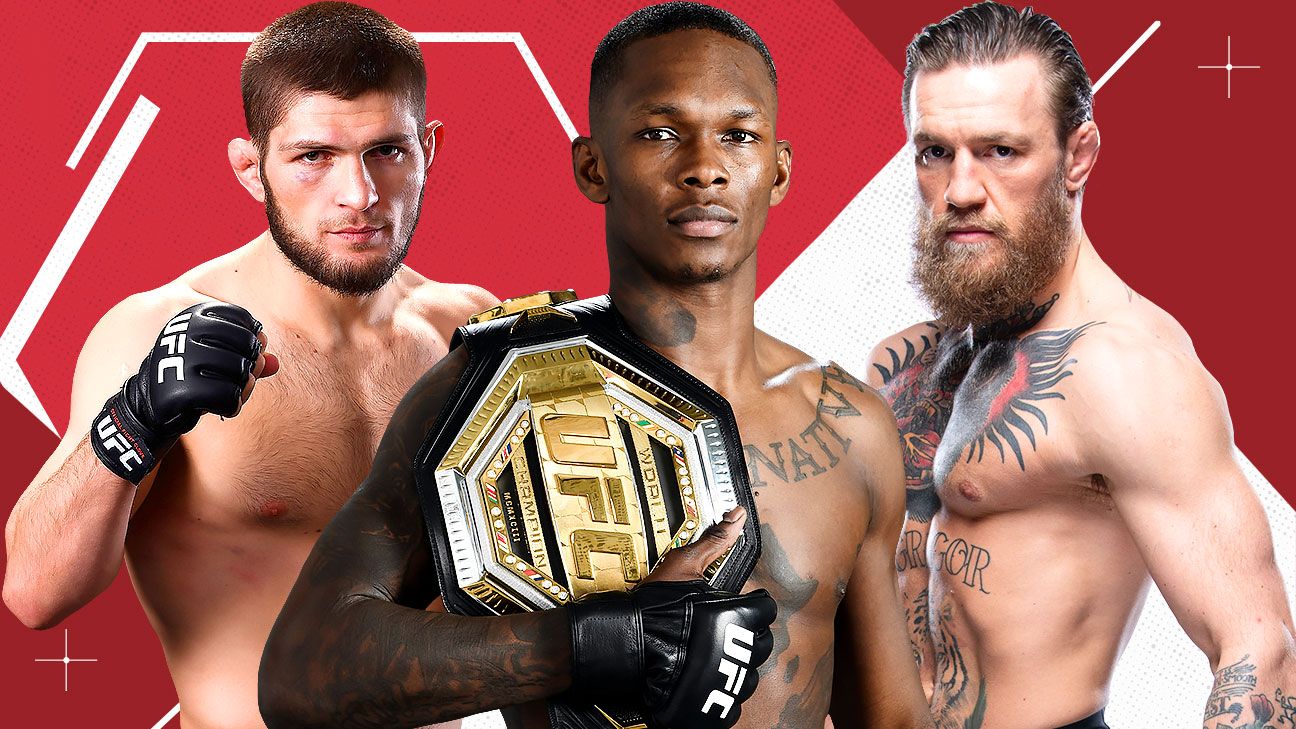 UFC president Dana White makes a living off his instincts about fighters, and he saw something different — something special — about Israel Adesanya after just his fifth UFC fight.

White saw the “it factor” in the Nigerian-born middleweight who fights out of New Zealand, and White’s instincts proved prophetic. Adesanya won the interim title and undisputed title in 2019 and followed up with two title defenses this year, including a dominating TKO of No. 1 contender Paulo Costa on Sept. 26. He has beaten every top challenger at middleweight and now is eyeing a shot at light heavyweight champ Jan Blachowicz.

And he has done it with a flair befitting his “Last Stylebender” nickname. Whether he’s fighting, speaking, trolling on social media or dancing his way into the Octagon, Adesanya is a must-follow personality.

And for all of those reasons, Adesanya tops ESPN’s first MMA Power Rankings.

This list is different than our pound-for-pound rankings, which can be found here. That is based purely on the skills of the best fighters in the world. The Power Rankings take into account a fighter’s success, as well as momentum and star power.

While Adesanya’s star is soaring, it still has a way to go to reach Conor McGregor‘s solar system. McGregor’s star power is unmatched in MMA, which is why he’s high on this list despite not beating an elite opponent in more than four years. If McGregor can build off his January win over Donald Cerrone by defeating a dangerous Dustin Poirier on Jan. 23, he’ll be contending for the top spot on this list in early 2021.

The panel of voters is listed below.

Momentum: He’s 2-0 in 2020, including a second-round TKO of Paulo Costa on Sept. 26. His next fight is expected to be for the light heavyweight belt against Jan Blachowicz.

Star power: He headlined UFC 243 in Melbourne, Australia, where a UFC-record crowd of more than 57,000 saw him dance his way into the Octagon, where he knocked out Robert Whittaker in the second round to claim the title.

He has nearly 4 million Instagram followers and he’s frequently able to get under the skin of Jon Jones, who’s widely considered MMA’s GOAT, despite the fact they’re not even in the same division — yet.

Momentum: How can someone who’s retired have momentum? As long as he’s still listed as the lightweight champ, he qualifies for this list. And when you reach the level of stardom Nurmagomedov has attained, you need to fight only once a year to generate momentum, especially when that fight is a dominating performance over someone such as Justin Gaethje.

Star power: Nurmagomedov is a global superstar with nearly 26 million Instagram followers. There’s a reason his fights in Abu Dhabi start at a different hour than every other main event at that location. It’s to accommodate people wanting to see him fight live. Other “Fight Island” cards cater to Eastern Standard Time, which means they start very early in the morning in Abu Dhabi.

Momentum: McGregor creates momentum just by tweeting. He wanted to fight three times this year, but he has to settle for just the 40-second win over Cerrone in January. He’ll try to stay busy in 2021, and that January bout vs. Poirier should be a fun way to kick off the year.

Star power: He’s No. 53 on the Forbes list of the richest celebrities in 2020. His Proper No. Twelve whiskey is a huge success. He has more than 37 million Instagram followers and his posts regarding Ireland’s lockdown during the pandemic drew responses from government leaders. He is by far the most popular athlete in UFC history. All this, and his last elite win was when he knocked out Eddie Alvarez in the second round on Nov. 12, 2016, to become the first UFC fighter to hold two belts simultaneously. “They think I’m toast, but I’m still the bread,” McGregor likes to say.

Momentum: Jones squeaked by Dominick Reyes in February with a unanimous-decision win and he hasn’t fought since. The former light heavyweight champ generated momentum by announcing he was moving up to heavyweight in August, and he could have a chance to add that title in his next fight. But there’s no timeline for his heavyweight debut.

Star power: He’s widely considered the greatest MMA fighter of all time, but some believe Nurmagomedov might be more deserving. Even though he hasn’t fought in nine months, Jones has never been far from the headlines. While he had another misstep with the law in March, he confiscated spray-paint cans from potential vandals in June, an incident caught on video. He has almost 5.5 million Instagram followers and is a frequent poster on social media.

Momentum: She dominated Felicia Spencer on June 6 to defend her featherweight belt and extend her winning streak to 11. She’s currently taking time off as Nunes and her fiancée, UFC fighter Nina Ansaroff, had their first child on Sept. 25.

Star power: Nunes is considered the greatest women’s fighter in MMA history, and she’s in the conversation for greatest regardless of gender. Her only drawback is a lack of competition. Nobody believes she can be beat. It’s possible she’ll ultimately have a trilogy bout against flyweight champ Valentina Shevchenko, whom she has already beaten twice, although the second fight was very close. Nunes has more than 1.2 million followers on Instagram.

Momentum: Miocic successfully defended his belt for a UFC-record fourth time on Aug. 15 when he won a unanimous decision in his trilogy bout vs. Daniel Cormier. The win cemented his status in the eyes of many as the greatest heavyweight champ in MMA history. His next bout is expected to be against Francis Ngannou in the spring. Momentum isn’t Miocic’s strongest attribute as he has fought just three times since July of 2018, going 2-1 against Cormier.

Star power: The title of “heavyweight champion of the world” always carries extra cache. And while Miocic doesn’t seek headlines, his story is one of the most compelling in the UFC as he’s a part-time EMT and firefighter in a Cleveland suburb. He’s one of the most popular athletes in Ohio with more than 1.2 million Instagram followers.

Momentum: Usman successfully defended his title against Jorge Masvidal via unanimous decision on July 11. Masvidal was a late replacement for Gilbert Burns and it’s believed he broke Usman’s nose in the fight, but Usman won convincingly. It was Usman’s 15th straight win and second title defense. Usman was expected to fight Burns in the main event of UFC 256, but he had to withdraw because of an injury.

Star power: Usman might be one of the more overlooked UFC champions. He has beaten some of the top names in his division, but nine of his past 11 wins have come via decision. He has been developing a media presence with analysis work and he has more than 1.5 million Instagram followers.

Momentum: She notched her fourth title defense with a unanimous decision over Jennifer Maia at UFC 255. Shevchenko is so dominant that even losing one round — as she did Saturday — surprises people. Her next opponent is expected to be Jessica Andrade.

Star power: She has more than 1.6 million Instagram followers and she and her sister Antonina — also a UFC flyweight — are carving out niches for themselves with various hobbies, including guns, dancing, boating, flying planes and playing the ukulele.

Momentum: He has gone from unknown to rising star on the cusp of a title shot in four months. That’s what happens when you win your first three fights in 66 days, which set a UFC modern-day record. He has earned performance-of-the-night bonuses in all three wins, including his 17-second KO of Gerald Meerschaert on Sept. 19. Chimaev’s hype train is full of momentum and it’s leading to an intriguing Dec. 19 clash vs. Leon Edwards in the last main event of the year.

Star power: It’s hard to imagine having more star power after just three non-title fights. But Chimaev isn’t just winning, he’s brutalizing. He has a 196-2 advantage in total strikes as a UFC fighter. If he’s able to defeat an elite talent like Edwards, look for Chimaev to be fighting for a title by this time next year, and look for his Instagram following — which currently is more than 1.1 million — to skyrocket.

Joe Rogan is high on Deiveson Figueiredo’s performance after a first-round finish of Alex Perez at UFC 255.

Momentum: Figueiredo, who is 3-0 in 2020, very well could be the UFC’s male fighter of the year. He submitted Alex Perez for his first title defense on Saturday and he plans to make his second defense against Brandon Moreno on Dec. 12. The 21-day turnaround would be the quickest for a champion or challenger in a UFC title fight, according to ESPN Stats & Information.

Star power: He has everything you want in a budding star. He has a great backstory, punctuated by various professions from hairdresser to sushi chef. He has a colorful personality and he’s a violent finisher. This star is ascending rapidly.