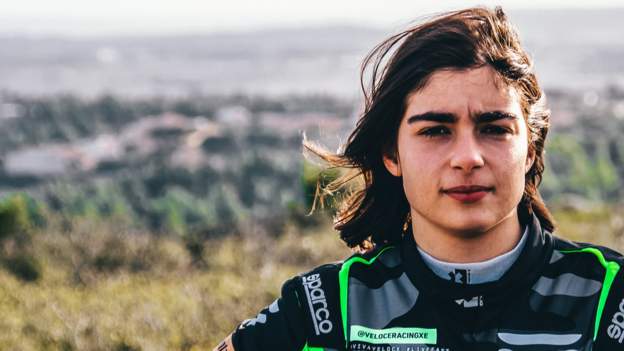 Last updated on 5 hours ago5 hours ago.From the section Motorsport

Britain’s Jamie Chadwick says there is “no reason a woman can’t be up there with the guys” after being confirmed among the 20 drivers competing in the inaugural Extreme E season in 2021.

The new climate-aware series, set to begin in March next year, will see a male and a female driver compete for each of the 10 teams in off-road electric ‘E-SUVs’.

“It’s really exciting for me,” said 22-year-old Chadwick, who will drive for the British Veloce Racing outfit.

Extreme E will be streamed live across BBC platforms, including iPlayer.

The series aims to raise awareness in areas around the world affected by climate change and visit territories – arctic, desert, rainforest, glacier and coastal – which have been affected, such as Greenland and Brazil’s Amazon region.

Newly crowned seven-time Formula 1 world champion Lewis Hamilton recently announced he will enter a team into the sport, as has his old Mercedes team-mate and title rival Nico Rosberg.

And Formula 1 design guru Adrian Newey will be ‘lead visionary’ for the Veloce team.

Newey designed many of the cars which dominated F1 across the late 1990s, as well as the Red Bull Racing cars that won four world titles between 2010 and 2013.

The series said in April this year it would field men and women in equal numbers, saying it wanted to promote “gender equality and a level playing field” within motorsport alongside its environmental aims.

“It’s huge. It’s amazing what Extreme E have done with the format they have chosen,” Chadwick told BBC Sport at her London home. “It’s exciting for me because it gives me this opportunity – it’s the same for everyone, 100% fair.

“It’s such a male-dominated sport. There are so few females, that you have to take that responsibility [of being a female role model]. But I’m always just focused on doing the best job I can possibly do.

“There is no reason why we can’t be up there with the guys.”

Chadwick, who won the female-only W Series title last year, recently took part in a test for her new London-based team in France and instantly loved driving the Odyssey 21 car, which will be assigned to every outfit.

“I never enjoyed a week so much in my life. Every time I got out of the car I was buzzing.

“But going quick is the next challenge. That’s always the way. You drive a car – it’s really fun, and then you realise you’ve got a job to do in it and that’s the hard bit.

“There’s so much you can do to these cars in set-up which can make the difference.

“I went into it fully thinking I was going to have to adapt to being a rally driver. But it was quite a halfway style – being sideways in a rally car is quite different to the finesse out on circuit, but some of that accuracy and pin-point stuff was really valuable in Extreme E cars.”

After signing for the Extreme E drivers’ programme in 2019, Chadwick says her involvement in the sport caused her to be far more aware of environmental issues.

“I’ve definitely been made more aware of climate issues, with a lot of stats and things I wasn’t aware of before. I try to do everything I can to help in my own life, such as scootering everywhere.”

Despite Chadwick’s Extreme E ambitions, her journey to a seat in Formula 1 continues.

The last woman to compete in a Formula 1 race was Lella Lombardi in 1976.

Already affiliated to the Williams F1 team as a development driver working on the team’s simulators, in June this year Chadwick received substantial backing to try to make it to the F1 grid from Rodin Cars’ multi-millionaire boss David Dicker.

Chadwick then signed for the Prema team to race in regional Formula 3 in Italy, with the aim of rising up to International F3 and F2. But following a positive start to a season interrupted by the coronavirus pandemic, Chadwick has suffered disappointing results.

“International F3 was definitely on the cards going into this year. But I would be first to admit I have not done a good enough job to justify a seat.

“But ultimately it’s all about learning experiences. I think a lot of factors add up to give you good results or bad results.

“I’m excited to turn it around and bounce back and show character in that respect. It can make the good moments more rewarding – there’s so many things that need to go right.”

Part of her progression up the lower formulas is based upon how many superlicence points she amasses – the scoring system which qualifies a driver to compete in F1.

Chadwick earned several points for winning the W Series title in 2019, and had hoped to gain more across her Formula 3 race programme.

Initially it was unlikely she would try to defend her W Series title, but she now admits returning to the series in which she made her name could get her back on track – especially as the W series will be a support race at eight F1 races across the 2021 season.

“It’s not something I’m ruling out, although it wouldn’t be my only programme. I would do it alongside another championship, such as Extreme E. The opportunity the W Series provides is huge and I’d be silly not to look at the option of it.”

Chadwick also is hopeful of driving the Rodin car she tested earlier in the year before the coronavirus hit. She is involved in developing what it said to be the world’s fastest road-going racing car.

“The Rodin car is based on an F1 car. Definitely the experience I got from driving that was invaluable.

“Every time I drive that car I just want to drive it more. There’s nothing like it.

“All this massively feels like a whirlwind. In a relatively short space of time, I’ve fallen in love with the sport completely.

“It was a hobby that turned into a career and now it’s just working as hard as possible to make that possible for the rest of my career.”