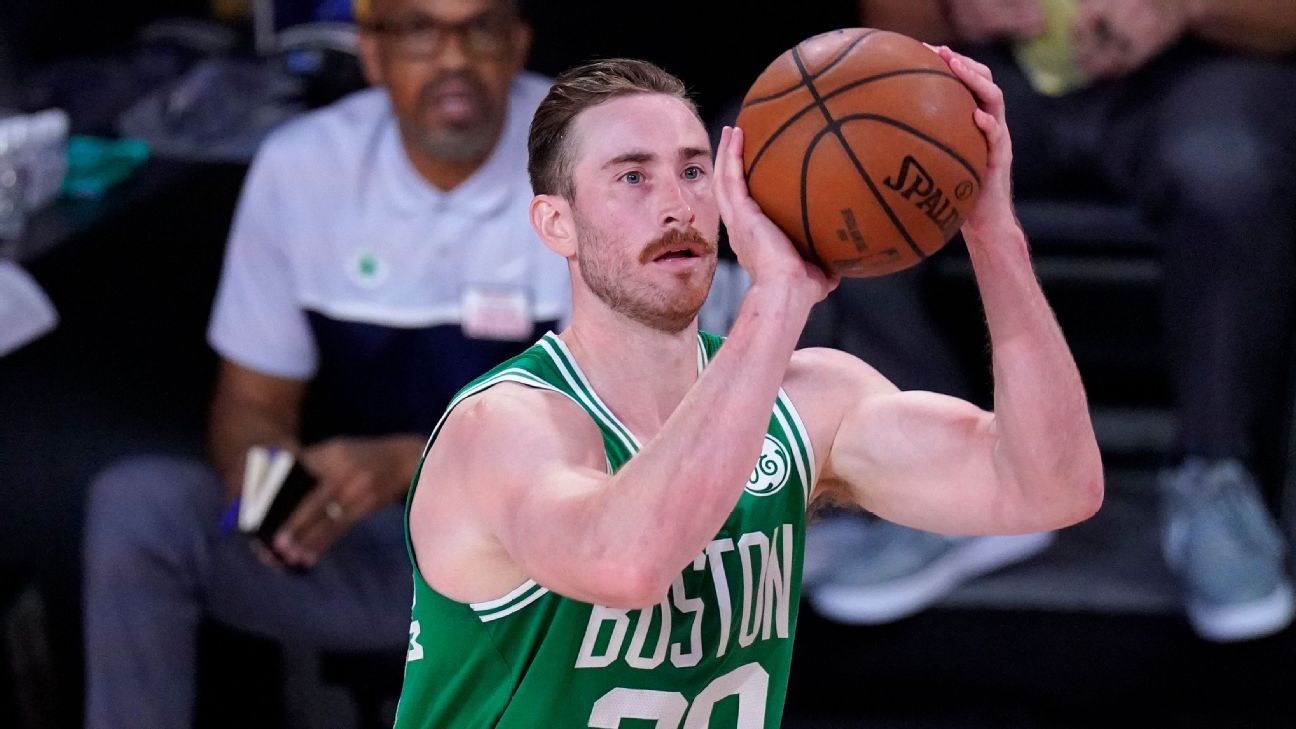 A historically compressed offseason saw free agency begin less than 48 hours after the league concluded its draft. Oh yeah, the NBA trade moratorium was lifted roughly 32 hours before the draft, creating a flurry of player movement seen possibly only in the busiest of hardcore fantasy formats. An already wild league accelerated the fun this fall.

Such a condensed window for player movement combined with a rapidly approaching regular season demands that fantasy basketball managers quickly appraise the many meaningful free-agent shifts that occurred. If you haven’t yet played fantasy hoops, I highly suggest reading André Snellings’ pitch for why this is the best season to give it a try.

2020-21 fantasy basketball arrives just in time for the holidays! Create or join an ESPN Fantasy Basketball league today! Sign up for free!

With a focus on the top free agents and trade targets who landed in new places, let’s discuss the fantasy-relevant players at each position who’ve transitioned into potentially meaningful roles. I organized the transactional chaos that just occurred into three groups: those who maintained value, gained value or lost value from a fantasy perspective.

Let’s lead off with the most boring bunch! But really, it’s natural that the value of some high-usage stars won’t change much despite the change of teams.

Given the odd erosion of a potential sign-and-trade deal for scoring guard Bogdan Bogdanovic, the Bucks’ offseason might not have gone as smoothly as they had planned, but they still secured two-time All-Star Jrue Holiday via a complicated four-team blockbuster. Holiday has assumed a 24.3% usage rate the past three seasons with the Pelicans, which just so happens to exactly match the rate Eric Bledsoe consumed as a key initiator for the Bucks after being acquired in the first week of the 2017-18 season. Usage rate is a measure of how often a player contributes to the endpoint of a team possession, whether that’s with an assist, turnover, a shot or a trip to the line.

It’s not just that Holiday and Bledsoe claim similar usage from the past two seasons in their respective roles. Bledsoe lofted 5.5 3-pointers per 36 minutes since joining the Bucks in November of 2017, while Holiday put up 5.1 per game from beyond the arc per 36 minutes with New Orleans. Scoring? Bledsoe posted 20.0 PPG on a per-36 clip in his Milwaukee career, with Holiday at 19.9 PPG with the Pelicans during this same sample.

This is all to say that while Holiday’s superior perimeter defense, lower turnover rate and higher value over replacement measures combine to signal an upgrade for the Bucks over Bledsoe in the real sense, it’s likely that Holiday’s actual fantasy production in his new destination closely mirrors Bledsoe’s profile and his work in New Orleans the past few years.

Reigning Sixth Man of the Year Montrezl Harrell traveled all the way across the hall at Staples Center to join the Lakers. There’s an argument he’s in a better spot with LeBron James diming him in the post, but I envision him serving as the team’s top offensive option on the second unit, paired with Dennis Schroder in such lineups — à la how Lou Williams and he were aligned with the Clippers. Schroder’s shift from the Thunder to the Lakers should also prove somewhat lateral, especially as Los Angeles will rely on his shot creation, given the lack of guard talent on the roster. As Kevin Pelton notes in his appraisal of the Lakers’ acquisitions, the Lakers’ staff “can base no-star lineups on the abilities of Schroder, Kuzma and Harrell to create their own offense.” This sounds a lot like how the Clippers leveraged Harrell, doesn’t it?

Serge Ibaka figures to serve a similar role with the Clippers to the one he’s played for Toronto the past two seasons. Maybe there’s some room for more defensive possessions at the rim, but he’s also going to be paired with two high-usage wings with the Clippers, so we can call this a wash.

Now to the fun tier — those who potentially gained value as fantasy performers this offseason.

Gordon Hayward‘s contract might seem a bit big considering his somewhat inconsistent production since suffering a brutal leg injury at the start of his Celtics career, but he’s undoubtedly in a better spot for statistical volume with Charlotte. The Hornets don’t have a traditional pure point guard on the roster or any proven playmakers in the frontcourt, suggesting an approximation of his All-Star-worthy numbers with Utah could resurface in Charlotte. Hayward’s usage topped out at last season’s 21.1% clip, while a return to the rewarding 26.5% rate he posted in his final three years with the Jazz is a helpful precedent to consider. With Hayward joining the Hornets, it’s likely Miles Bridges‘ path to production is a bit tougher.

Josh Richardson‘s fit with Dallas will likely prove much smoother than the wonky collaboration he endured in Philly this past season. Richardson was effective as a pick-and-roll initiator with the Heat in his final season with Miami but was rarely leveraged in such a role with the 76ers. With potential to create whenever he’s on the floor without Luka Doncic and real upside as a catch-and-shoot 3-point option when Doncic is orchestrating, Richardson could blend his offensive with his awesome defensive rates to create a sizable leap in fantasy impact.

Christian Wood‘s storied rise from G League star to fringe roster contributor to productive NBA starter has been remarkable. Now on his sixth team in five seasons, his arrival in Houston after finding sustained success with Detroit last season comes with significant upside; consider that Wood slashed for 22.8 PPG, 9.9 RPG and 1.8 combined steals and blocks while sinking 1.7 3PG as a starter for the Pistons in the final dozen games of last season. Likely to serve as the team’s top rim protector and paired with two assist mavens in Russell Westbrook and James Harden — for now — Wood might just be the biggest riser of the offseason in fantasy terms.

Houston also netted DeMarcus Cousins on a one-year pact. While Boogie might get overdrafted in some leagues based on name value alone, his shift to Houston might be the ideal landing spot for him, given the lack of size on the roster.

Turning to Detroit, Jerami Grant joined the Pistons on a rich three-year deal and is poised to consume more minutes, touches and rebounding and defensive opportunities as a starter. Like with Wood’s strong finish with Detroit last season, Grant saw his role in Denver rise down the stretch for the Nuggets, offering a window into the upside he presents for Motown; the bouncy combo forward averaged 16.9 PPG, 1.7 combined blocks and steals, and 1.9 3PG in 30.4 minutes in the final eight meaningful games of the season (Denver didn’t play its rotation players much in the finale).

Conversely, Denver’s Michael Porter Jr. has less competition for meaningful minutes and touches with Grant off the roster, vaulting him into an even higher tier as the new season approaches.

Assessing the sleeper tier, Aussie center Aron Baynes was a boss when Deandre Ayton was suspended last season, averaging 15.5 PPG, 6.0 RPG, 1.1 combined blocks and steals — and most impressively, 2.0 3PG in a dozen starts to open last season. This unique blend of stats should translate well with the Raptors, a team seeking to fill the frontcourt void left by the departures of Ibaka and Marc Gasol.

We find the Bucks’ Donte DiVincenzo in a strong spot, given that the team lost Wesley Matthews to the Lakers and Kyle Korver remains unsigned, signaling the Villanova product could leap into a starting role with the Bucks. A shooting guard with legitimate 3-and-D upside, DiVincenzo was 10th in the entire NBA in steal percentage last season.

The 76ers badly needed an infusion of floor spacing after last season’s Monstars experiment flamed out quickly in the playoffs. The arrival of Danny Green and Seth Curry could really help open the floor for Philly, with Curry potentially seeing a notable jump in minutes and shooting volume playing alongside Ben Simmons, who led the league in assisting 3-pointers last season.

Not all change is positive or lateral for fantasy purposes, such as Robert Covington shifting from an extremely unique role with the Rockets to a more traditional role with the Trail Blazers. As a lifelong Sixers fan, I’m a huge fan of Covington’s elite defense and fearless floor-spacing tendencies and believe he’s still going to be a very positive fantasy contributor with Portland.

The downgrade stems from just how rewarding his role with Houston proved; he was among the top centers in the NBA in regard to shots defended at the rim as the Rockets’ resident rim protector, leading to him more than doubling his block rate last season from his time with the Timberwolves. Paired with a traditionally big center in Jusuf Nurkic and likely to split offensive touches with Carmelo Anthony at power forward, it’s likely Covington is not the same option he was in Houston, but he could approach the very solid production he afforded the Timberwolves in his stint with Minnesota.

Atlanta went on a spending spree with a specific eye on savvy Euro shooters, as Danilo Gallinari and Bogdanovic join Trae Young in Georgia this season. Galli joins a suddenly crowded Atlanta frontcourt that claims incumbent power forward John Collins and big wing De’Andre Hunter competing for minutes and usage. Both Collins and Galli seem to have lost statistical steam with the move. It’s simply one of those cases where the team improved, but several players are likely to make some statistical sacrifices. Bogie could still thrive as the lead initiator on the second unit in similar fashion to his role with the Kings the past few seasons, while also enjoying more open shots while starting aside an elite distributor in Young.