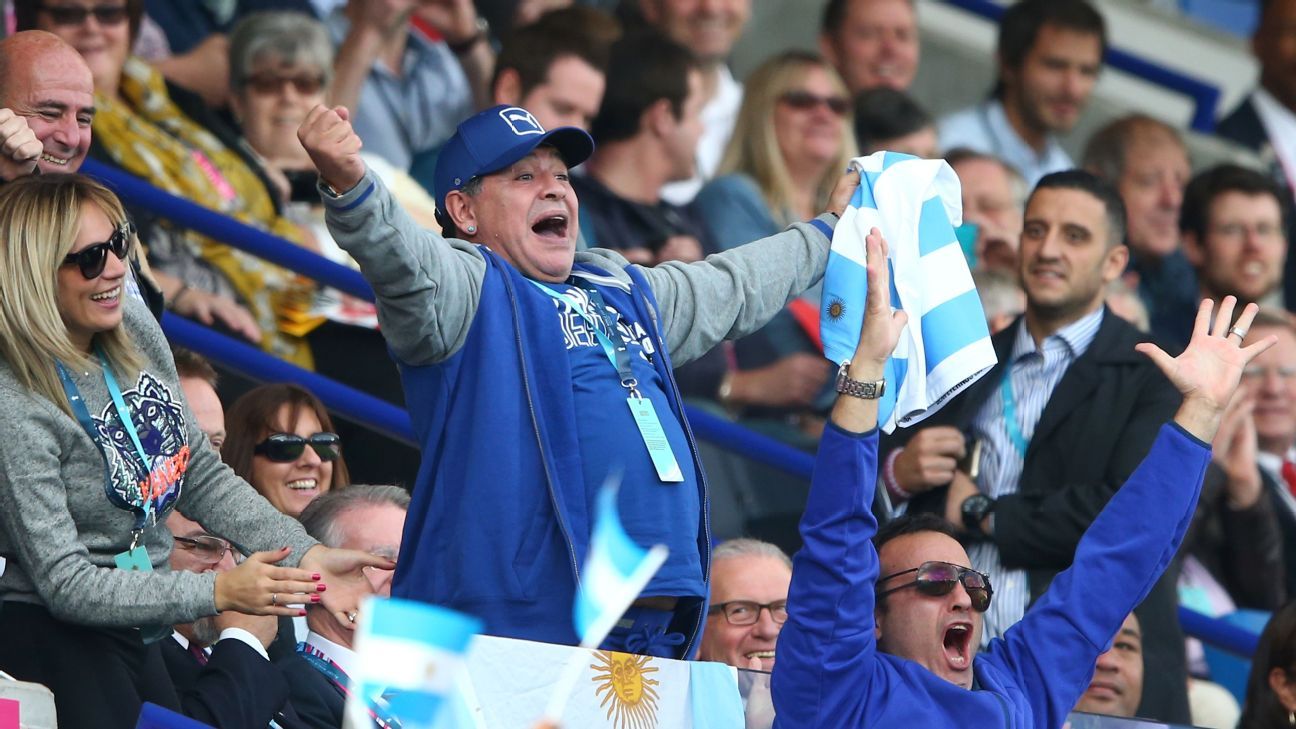 The Pumas will be heavy hearted as they enter their must-win Tri Nations tournament clash with the All Blacks on Saturday night in Newcastle, Australia, following the death Wednesday of Argentine football star Diego Maradona.

A lover of all Argentine sports, but particularly the rugby team, Maradona was seen frequently at Pumas matches around the world and famously joined the team in the change rooms following their win over Tonga at the 2015 World Cup in London. Pumas coach Mario Ledesma believes he’ll be watching the side again this weekend.

“He loved the Pumas, he’ll be watching for sure,” Ledesma told the media on Thursday. “He came to many games, and he came once to our changing room after a game against the All Blacks in La Plata; we’d lost on the last ball.

“I crossed paths a couple of times, but not many. He had an attraction, the world stopped when he was there; he was like magic.”

A world champion for the Argentine football team and considered one of the greatest players of all time, Maradona was a symbol for people across his country, in every sport, of commitment to the national jersey. Despite many of the players in the Pumas not having seen Maradona’s career, they still understand the influence he had on their nation.

“The ones who felt it [Maradona’s death] the most are the staff because he was more our generation who saw Diego play on the field. Most of the players over here didn’t see him play when he was playing, they see videos and stuff, but they’ve known Diego who wasn’t playing any more,” Ledesma said.

“He’s still a big figure in our country and he epitomised a lot the way the Argentinians are. We’re trying to remember him the best way possible, which was on the field, representing these colours. He was an example of how you should play for this jersey.”

It remained unclear what the team will do to honour the superstar’s death, but Ledesma said it wouldn’t involve Nico Sanchez’s No. 10 jersey.

“If we do something everyone’s doing the same thing — we’re not going to let one guys wear the whole thing. We’re definitely going to do something in his remembrance.”

A young boy when Maradona was at the height of his playing career, Ledesma reminisced about the moments watching the football star play and the unity he brought to an often-fractured nation.

“For our generation, he’s a symbol, he’s very iconic. I remember being in seventh grade at the age of 6 — the World Cup was going on, and we’d go watch the games in the main square in our town.

“He united people in Argentina, where sometimes it’s difficult to unite people, especially who think differently. He was somebody that united, everybody was for him or against, but he was unanimous.

“He gave a lot of happiness to people in difficult times. Obviously he’s somebody who came from very little and he became the king of the world almost. He was a symbol for a lot of Argentinians who struggle and think that could be possible for them too.”

Famously defeating the All Blacks for the first time two weeks ago in their opening match of the Tri Nations, it was a moment that captured the world’s attention and it’s something the team hope gave Maradona a smile in his final days.

“I hope for him [he saw],” Ledesma said. “The last couple of months have been really difficult for him and he’d been switching off slowly and everybody felt it was coming. We could have made him happy just that little bit, that would be great.”

Facing the All Blacks for the second time in their third match on the bounce, and desperate to keep their Tri Nations hopes alive, the Pumas will be drawing on Maradona’s memory to help them rise against New Zealand and continue building upon the strong culture and identity of the Argentine jersey.