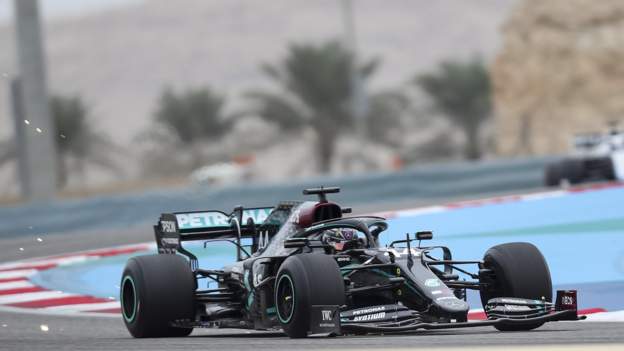 Lewis Hamilton, in the first race since becoming the most successful driver of all time, dominated first practice at the Bahrain Grand Prix.

Hamilton was 0.449 seconds ahead of team-mate Valtteri Bottas in second place, with Racing Point’s Sergio Perez in third nearly a second off the pace.

It was an unrepresentative session, not least because the teams spent some of it assessing 2021-specification tyres.

In addition, it was held in daylight with qualifying and race in the dark.

The test tyres added to the complexity of the session, with Hamilton and Bottas using the 2020 medium tyres to set their fastest times, while others used soft tyres or the test tyres, which were 2021-spec medium compound tyres.

For what it was worth, McLaren’s Carlos Sainz was fourth fastest, ahead of Alpha Tauri’s Pierre Gasly and the Red Bulls of Max Verstappen and Alexander Albon.

The Ferraris of Charles Leclerc and Sebastian Vettel were 11th and 12th fastest.

Racing Point, McLaren, Ferrari and Renault are locked in a close fight for third place in the constructors’ championship, with millions of pounds at stake for each position gained, with three races to go this season on consecutive weekends in the Middle East.

Meanwhile, Perez, Leclerc and Renault’s Daniel Ricciardo are disputing fourth in the championship behind Hamilton, Bottas and Verstappen.

Unusually in the desert, there were spots of rain at various times during the session, and a number of incidents.

Haas driver Romain Grosjean had a high-speed spin at Turn Six, destroying his tyres and narrowly avoiding the barriers, and Leclerc also had a less dramatic rotation at Turn Two.

And Bottas struggled early on with locking his inside front wheel at Turn 10, which has a tricky entry zone in which drivers have to brake and turn, destroying his first set of tyres and damaging his second.