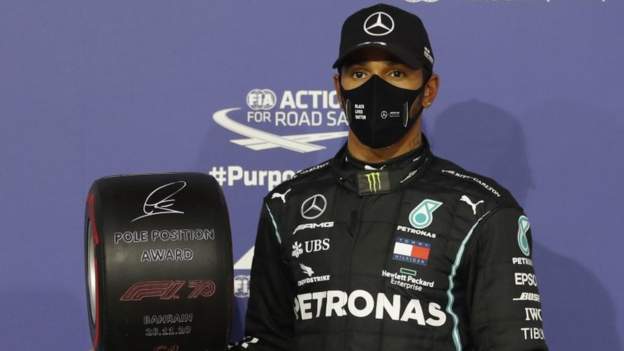 Lewis Hamilton’s hunger has clearly been undimmed by his monumental achievement in becoming the most successful racing driver in history.

Two weeks after clinching his seventh world championship, with three races still to go, the Mercedes driver has turned up in Bahrain as if nothing had changed and everything was still at stake.

Another pole – his 10th of the season, the 98th of his career – was won in convincing style, by a quarter of a second from team-mate Valtteri Bottas, who seemed a little uncomprehending afterwards. And who would bet on Hamilton converting that into his 11th victory of the season on Sunday?

Despite his monumental success, there are another couple of major landmarks awaiting Hamilton this season, should he sweep the final three races.

One is 100 poles – a truly remarkable achievement, considering the next highest score by any driver is 68. And the other is 13 wins in a season, which would equal the all-time record held jointly by Michael Schumacher and Sebastian Vettel.

Hamilton has always said he is not one for statistics, even if the big ones clearly do resonate with him, and on Saturday he said: “It’s been an incredible year and anything from now is just an added bonus.”

Hamilton said he was enjoying the new lightness of having the championship tied up. “With the pressure off, it’s a lot more enjoyable,” he said. And on paper, it’s hard to see anything stopping him on Sunday.

Hamilton has looked imperious all weekend, while Bottas has been struggling with his car, locking brakes repeatedly and generally not looking comfortable.

And Hamilton starts on the clean side of the grid, on the racing line, while Bottas is on the dirtier inside, where there is less grip.

The main question marks are around strategy, with high tyre degradation indicating this could be a rare two-stop race.

Mercedes focused much of their work on Friday on assessing the 2021 tyres Pirelli gave all the teams to try, and are heading off into the unknown a little in the race, having not done race-simulation runs on either the medium or hard tyre, which will be the focus of the race.

And Verstappen, as ever, won’t be giving up without a fight.

He had looked a potential threat for pole when he went fastest in final practice, only for the Red Bull to fall away when the sun set and the grip came up.

“The weekend was pretty positive,” he said. “Just lacking a little bit in qualifying. Let’s see what we can do. It is quite aggressive on tyres here and it should be quite an interesting race.”

One of the key issues of the weekend was those 2021 Pirelli tyres, which all teams ran on Friday in preparation for next season. The drivers did not like them. At all.

“Unfortunately we have had the same tyre for the last two years,” he said. “At the end of 2019 they brought a new tyre and it was quite a bit worse. So we kept the tyre from last year.

“So they’ve had two years to develop a better tyre and they’ve arrived with a tyre that is three kilos heavier (per set) and is a second (a lap) worse.

“I know that doesn’t make much difference to the fans but from a drivers’ point of view we are working with brands at the forefront of technology and elevating and moving forwards and if we’re going back after two years of development, I don’t know what’s happened.

“It doesn’t feel good out there. It’s a worry. If that’s the best they can do, which it clearly is, we would be better to stay with this tyre.”

He was far from alone. Ferrari’s Sebastian Vettel described the tyres with a swear word, adding: “I’ll be surprised if anyone likes them.

“They were not a step forward, the opposite pretty much. Probably worth a shot but I hope we don’t see these tyres again. They are quite a lot worse compared to the tyres we currently run.”

Pirelli’s F1 boss Mario Isola responded to the drivers’ concerns by saying that the new tyre was designed with one specific intention in mind – to improve structural integrity. This after a series of tyre failures this season, most famously affecting Hamilton on the final lap of the British Grand Prix.

Isola said the new construction would allow Pirelli to reduce pressures – as raising the pressure is the only method it has with the current tyres of making them more robust, and this creates its own problems in terms of grip and performance.

He pointed out that the cars were not optimised for the new tyre during testing on Friday, and that next year’s cars will be different anyway, as a result of technical changes made to lower downforce, at Pirelli’s request, to put less stress on the tyres.

Isola said he “fully respected” the drivers’ opinions, but added: “We are happy with the product we homologated and I think this slight difference in performance will be recovered in the pre-season test. I feel they will be at least as fast next year and I don’t see any issue with the performance.”

The drivers, though, are anything but happy. McLaren’s Carlos Sainz said they had expressed their concerns to the FIA, and would continue talks with the governing body and Pirelli to find a solution.

If this all sounds a bit esoteric, it’s anything but. The behaviour of the current tyres is regarded by many – drivers, engineers and more – as a fundamental problem affecting the quality of the racing.

The issue with the Pirellis is that they are prone to overheating, drivers cannot push to the limit without pushing them over their temperature threshold, and this affects both their ability to drive hard in races and follow other cars closely for any length of time.

Their concern is that Pirelli has known since 2015 that the drivers wanted tyres that did not require as much thermal management.

Pirelli says it is aiming to address this with the new tyre for the bigger 18-inch wheels being introduced for the new rules in 2022. But the drivers clearly feel it is not good enough that some steps have not already been made.

Sainz said: “On the drivers’ target letter, there has also been a lot of requests regarding performance, overheating and blistering, apart from safety.

“Safety is one of our highest priorities if not the highest, but after two or three years on the same tyres, you expect some improvement in the performance or at least in the overheating issues we have been having recently.

“That’s why the drivers are talking a bit more about making the tyre less prone to overheating, which in the race is what limits us in the race from creating a better show and pushing ourselves as F1 drivers.”

Wolff said Pirelli had “taken the drivers’ comments on board” and would make “tweaks” to improve the new tyre’s performance.

But he pointed to the failures of this season – in particular Lance Stroll’s high-speed crash caused by a puncture in the closing stages of the Tuscan Grand Prix at Mugello – as a reason not to abandon the new design.