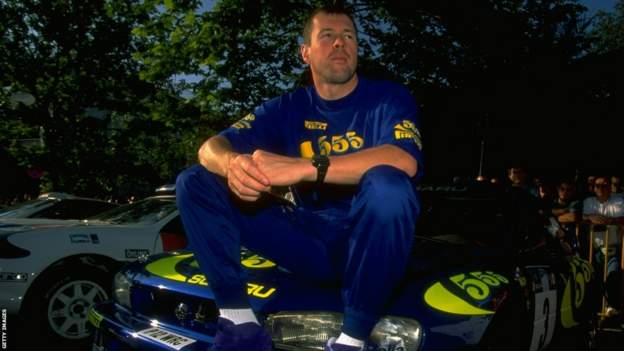 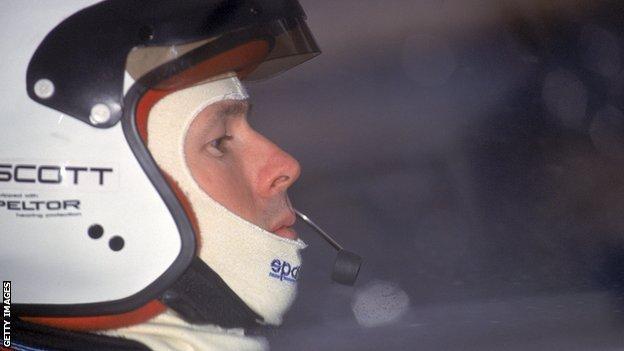 “We were in Safari Rally and we had to drink a lot of fluid and Colin needed a pee and was bursting, so he gave up and just had a pee in the car.

“I ended up having to drive the car with my left hand on the steering wheel and him peeing in amongst the floor – but we were quickest by three-and-a-half minutes in that section and we went on to win our first Safari Rally.”

Co-driver and friend Nicky Grist remembers Colin McRae, who on 22 November 1995 became the first British driver to win the World Rally Championship (WRC) title, and at the time was the sport’s youngest ever champion at 27 years old.

He is only one of two British drivers to win the series, with Richard Burns clinching the title 2001.

And now another British driver looks to be on the cusp of emulating McRae and Burns in rallying.

Elfyn Evans, 31, leads the 2020 standings with one round remaining. The Welshman has a 14-point advantage over multiple world champion and team-mate Sebastien Ogier.

He became known for his flamboyant, crazy and fearless driving style and his motto ‘if in doubt, flat out’ made him a fan favourite.

Tragically, in September 2007 McRae was killed after the helicopter he was piloting crashed near his home in Lanark, Scotland.

He was 39 and died alongside his five-year-old son Johnny and two family friends – 11 months after his final WRC appearance. The Scottish driver’s memory lives on and flags emblazoned with his name are still seen on the side of many rally stages at events across the world.

McRae was an adrenaline junkie and this was evident to see when he first made it on to the world stage at the Swedish Rally in 1987 in a Vauxhall Nova. He was known for his daredevil pace but also his spectacular crashes. For example, in 2001 at Rally GB he crashed at 93mph, his Ford Focus rolling four times at the Rhondda stage in South Wales.

‘He would be going sideways into corners’

Grist was McRae’s full time co-driver between 1997 and 2002 and, after that partnership ended, they came together for one-off events, like Wales Rally GB in 2005 and the X-Games in 2006.

Between them they won 17 WRC races – most of them in the iconic blue and yellow Subaru Impreza. Grist, 59, says racing alongside McRae was always unpredictable and exciting.

“That whole car was developed around Colin – it was an extension of himself and he made it dance. From the passenger seat it was great to experience it,” said Grist.

“He had a very flamboyant driving style – he was very sideways. If there was a jump he would be the highest and the furthest and the fans would love it because he was so spectacular. We lived the dream.”

McRae or McCrash, as he was also known, threw his car around a rally stage. Spectators never knew if he would win or crash – and that made his fans love him more.

“Colin was the kind of guy who would push, push and push. And it was all about being the quickest, and it was that do-or-die attitude that people loved. He would still be giving it his all when there was no hope left, but instead of accepting second best he always had to go and get the ultimate goal of winning,” said Grist.

McRae’s love of motorsport started at the age of seven, when he discovered off-road motorbikes and then swapped two wheels for four. He was inspired by his father, Jimmy, 77, who was a five-time British Rally Champion.

McRae, like his father before him, dominated the British Rally Championship and won titles in 1991 and 1992. His first full season in the WRC came in 1993, and his first victory on the world stage happened at Rally New Zealand that same year.

He won a total of 25 World Championship races, but the highlight was winning the World Rally Championship title, alongside co-driver, Derek Ringer.

The 1995 season was heightened by an intense rivalry with his Spanish team-mate, Carlos Sainz. Team orders at the penultimate round in Spain meant tensions were extremely high, and when they got to the last round in the UK the pair were on equal points – winner takes all.

McRae needed to beat Sainz in order to be crowned champion and even two punctures did not stop him from achieving his dream. His father, Jimmy, was at the final stage at Clocaenog in Wales.

“I was at the end of the last stage biting my finger nails and my wife and the whole family were there, it was such a relief to see him coming down the last hundred yards of the stage and we knew that he won the rally and I was in tears,” said Jimmy McRae.

McRae was runner up in the WRC in 1996 and 1997, and in 1999 he joined Ford. He stayed with the British team for three years and during that time racked up another nine WRC race victories. His last full season in the top flight came in 2003 – his best finish was second at the Monte Carlo Rally with Citroen.