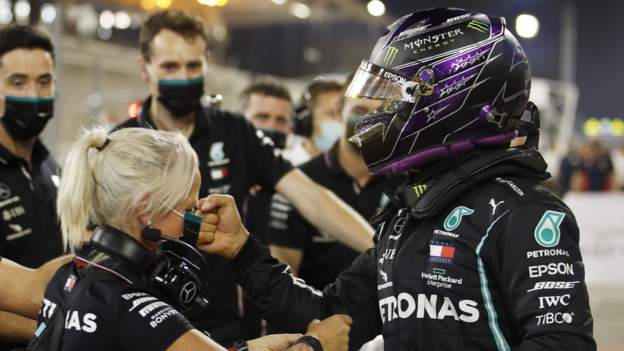 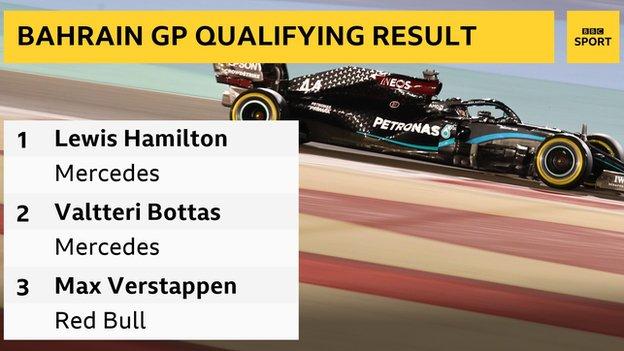 Hamilton, who clinched a seventh title in Turkey two weeks ago, was a comfortable 0.289 seconds clear of Mercedes team-mate Valtteri Bottas.

Red Bull’s Max Verstappen, who looked a threat to Mercedes through practice, fell back to his customary third.

But the British-Thai driver was 0.6secs behind the Dutchman, and less than 0.1secs ahead of Racing Point’s Sergio Perez.

Despite becoming the most successful driver in history in Istanbul, having equalled Michael Schumacher’s record of titles and already surpassed his win tally, Hamilton is showing no signs of relaxing.

In fact, he said he had not deliberately chosen not to celebrate his success because he wanted to continue his run of form and end the season on a high.

“I didn’t celebrate too much,” he said. “I was training and making sure I was ready for this and keeping my eye on the ball.

“With the pressure a little bit off, it’s a bit of a release to go and drive like I just did.”

Hamilton was fastest on both runs in final qualifying, but did not get the best out of his first lap, which was slower than he had managed on harder ‘medium’ tyres in second qualifying.

That put him 0.146secs ahead of Verstappen, with Bottas third.

Hamilton said there was “plenty of room for improvement” and he went out and proved it.

Although all three improved on their second runs, Hamilton moved further clear, with Bottas slipping in front of Verstappen for the customary front of the grid in 2020.

It was the 98th pole of Hamilton’s career, and he can reach a century if he does the same at the final two races of the year, a remarkable achievement.

Bottas said: “It felt good. That’s the problem when it feels good and it feels like you are extracting the best from the car and the lap time is not there.”

Verstappen described his lap as “quite decent”, adding: “I just lacked a bit of rear grip.”

The battle for third/fourth

While the top of the championship is settled, there is an epic scrap for third in the constructors’ championship between Racing Point, McLaren, Renault and Ferrari, and for fourth in the drivers’ chase between Perez, Ferrari’s Charles Leclerc and Ricciardo.

Perez gave him and his team a boost with a strong performance, while Leclerc is stuck down in 12th place on an uncompetitive weekend for Ferrari.

Leclerc was beaten in qualifying by team-mate Sebastian Vettel, who was 0.016secs ahead in 11th place, for only the fourth time this season.

McLaren’s Carlos Sainz was 15th after a problem on his rear axle sent him into a spin at the start of second qualifying.