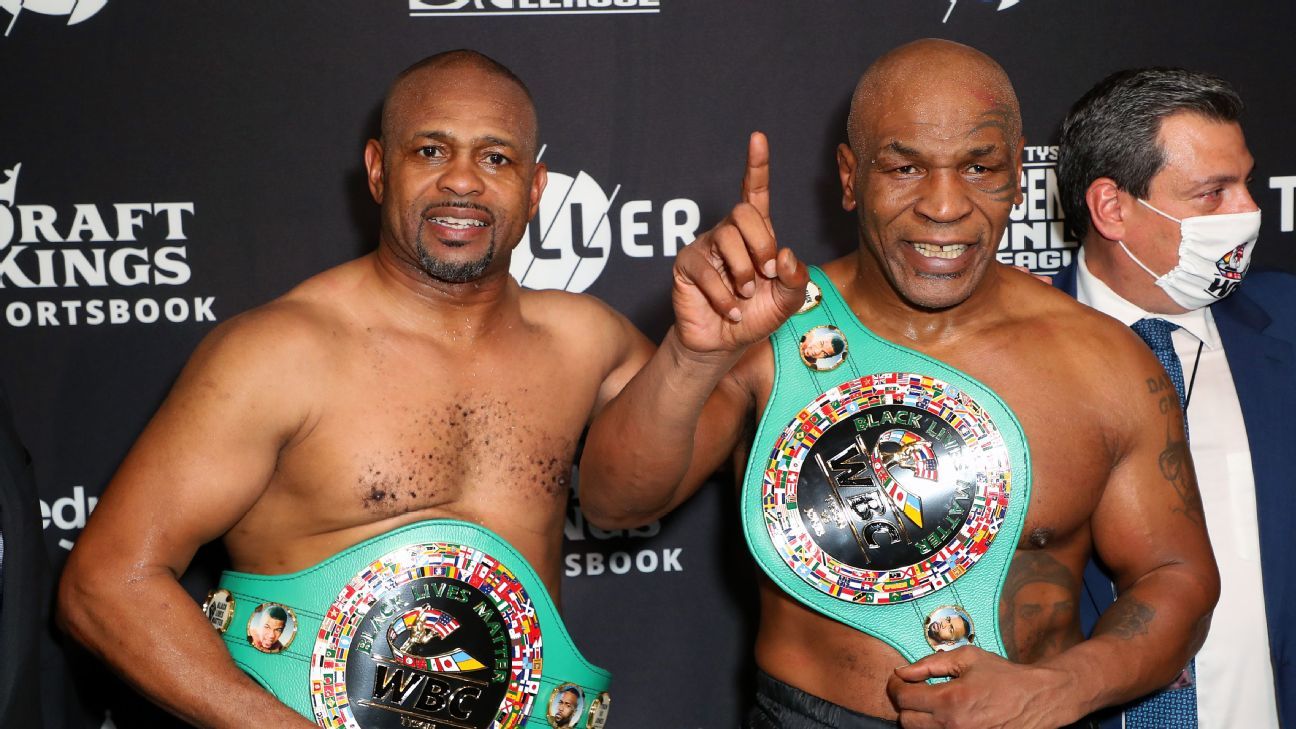 The exhibition fight between legendary boxers Mike Tyson and Roy Jones Jr. wasn’t always a showcase of technical boxing wizardry. But it was more or less entertaining, which was the entire point of the evening. The two former champions fought to a “draw” in an 8-round bout that topped an eventful night of boxing featuring a wide array of characters.

YouTuber Jake Paul, former NBA Slam Dunk champion Nate Robinson and even recent middleweight champion Badou Jack were among those who laced up gloves for the pay-per-view event. And from the early undercard fights featuring unheralded prospects to the main event that featured commentary from Snoop Dogg, the entire night delivered.

ESPN.com’s Michael Rothstein and Ben Baby break down all the action at Staples Center in Los Angeles on Saturday and give their thoughts on the card’s long-term impact on the sport.

Rothstein: It wasn’t a farce and wasn’t boring. Mike Tyson and Roy Jones Jr. had that going for them Saturday night. I’ll even go one further: Tyson, 54, looked largely in shape and, for his age, like someone who could still fight. And this is a shock to me, because I was in the camp of those thinking this fight should not have happened. But I would watch Tyson fight again.

When I spoke with Tyson ahead of the fight, he told me how hard training was and how in shape he was for the fight. And in a sport where fighter perception isn’t always reality, what Tyson said was very, very real — for a 54-year-old who hadn’t been in the ring in over a decade.

And considering the low bar I had for this production to begin with, it exceeded my expectations. By a long shot, even if Roy Jones Jr. looked tired by the third round. Consider me intrigued. Ben, what do you think?

Baby: Nostalgia was the main selling point for the entire night. It wasn’t about what Tyson or Jones Jr. actually did against each other. It was about reminding us what they looked like in their primes.

And the small glimpses we received made the fight surprisingly enjoyable. Everything about Tyson, from the black shorts and shoes to the menacing hooks, harkened back to the days when he was the most feared man on the planet. Jones Jr. was nowhere near as athletic as he was when climbed divisions to win belts, but he had a couple of moments that were a reminder of his greatest hits.

I agree with you, Mike. This definitely exceeded my low expectations for the evening. I don’t want to see it again because I don’t think the appeal of watching Tyson lasts longer than one night. But Saturday night was good for what it was. And that wasn’t the only entertaining fight of the night.

Rothstein: If it was done for entertainment, then well done. But it was called “a draw,” which wasn’t really an accurate portrayal of what went on. Tyson won the fight. That was clear. And while Tyson was saying that he wanted to do it again. Jones Jr. didn’t seem quite as enthused.

Tyson said before the fight he didn’t want to be a one-off fighter for this. He wanted to go more than one time, but said he wants to do it for charity more than anything more serious.

And, shockingly, I think I would watch something similar again. In the right circumstance.

Baby: I don’t know if I’d go that far. I don’t know of any other retired fighters who still carry that kind of name recognition aside from Floyd Mayweather Jr.

But as good as Tyson looked tonight, I’m still fearful for his long-term health if he continues to fight at his age. As we learned from the Jake Paul-Nate Robinson bout, you don’t play boxing.

Rothstein: Paul beat Robinson and then called out Conor McGregor. Is Paul a fighter? I don’t know. At least he could put together a punch against Robinson, who basically spent his time in the ring just running at Paul, clinching up and then, whenever he ran into a punch, fell to the canvas.

But McGregor? C’mon. Even if McGregor is a UFC fighter and didn’t look the part in the fight against Floyd Mayweather, there’s very little shot Paul could beat a seasoned fighter in McGregor — especially if McGregor took the fight seriously. Like literally no shot.

Baby: Not so fast, my friend. As much as I hate to admit it, Paul actually showed some surprising ring acumen in his two pro fights this year. And the combination that finished Nate Robinson was a testament to his work in the gym.

Paul’s third and final knockdown started with a crisp inside uppercut that started a combination that finished with a right hand, which is textbook if we’re being honest. It’s not crazy to think that Paul could hang with other MMA guys like McGregor and Dillon Danis, who desperately is looking for an easy payday.

Paul’s performance was a reflection of the entire night as a whole. From a production standpoint, the whole event was surprisingly splendid.

Rothstein: And honestly that’s perhaps the biggest surprise of all of this. I was incredibly skeptical of this entire operation here and whether or not it would have any level of success after the promotion of it seemed scattershot at best. And yet, it all looked quite sleek. The integration of music and boxing was seamless and provided a good rhythm to the entire spectacle.

Still, I don’t know if this would work for every card, but I could see major boxing promotions take something from this — particularly the fast-paced style of it — for big-time cards. Imagine a musical performance before a big title fight instead of a long, overproduced feature or a half-hour wait time being filled by chatter. I really, really liked that.

And the undercard — save that Paul-Robinson fight — was actually action-packed and entertaining. A couple of fighters, specifically Edward Vasquez and Jamaine Ortiz, gained some fans tonight. Israel Adesanya was a strong commentator who offered a different perspective than you typically hear for a boxing fight. I’d be interested in him serving as an analyst again, whether it’s on a UFC or boxing card. Who — or what — surprised you the most?

Baby: This whole event showed where boxing misses the mark in a lot of ways. A company that has no previous history has arguably done a better job with their COVID-19 setup than any of the established networks or top promoters. It looked great and helped make amends for the lack of fans in attendance.

The whole card was really well done. The gems of the night were the first two bouts involving true professional yet unknown boxers were terrific. Edward Vazquez and Jamaine Ortiz won in action-packed showings that boosted their profile.

And more than anything, the whole thing was wildly entertaining. And that’s the whole point of boxing. More often than not, that gets lost in the business of boxing. The pay-per-view was well worth the $50, which isn’t always said for boxing cards with some of the sport’s top names.

The whole night was an unexpected lesson in the modern dynamics of the sweet science.