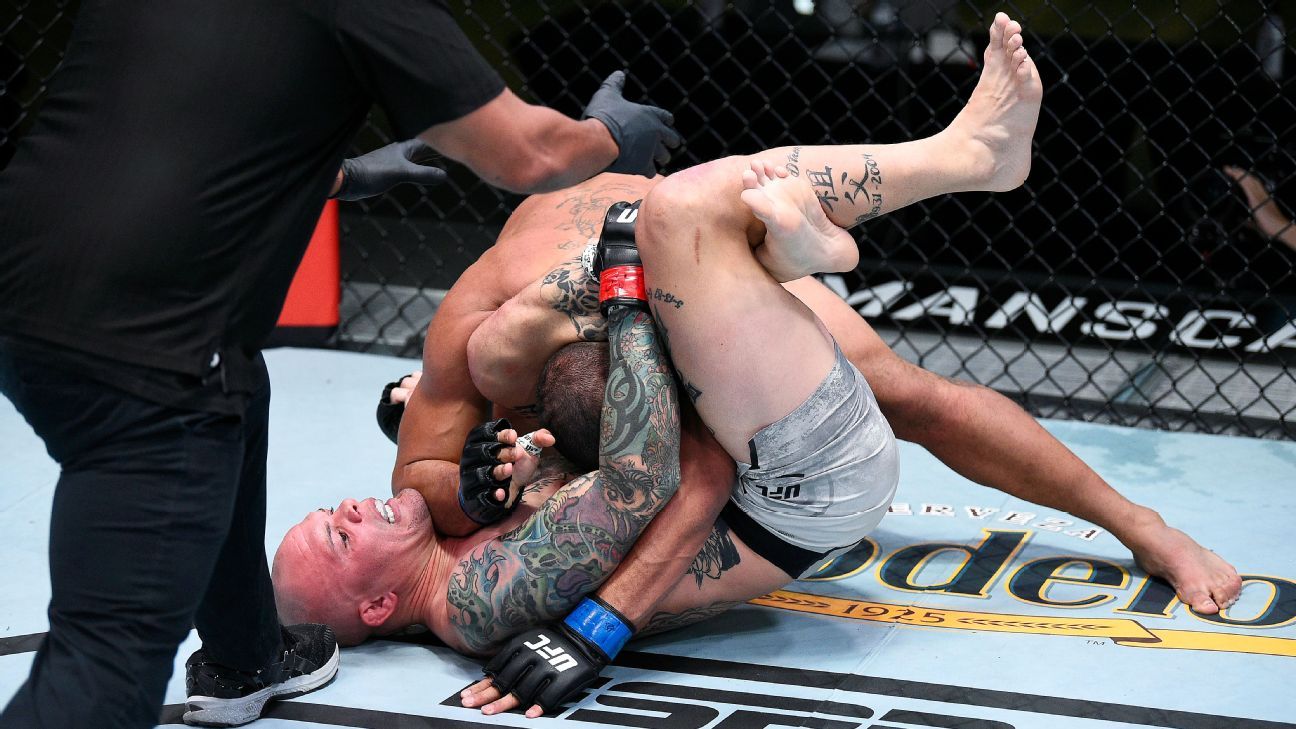 Devin Clark landed a big overhand right out of the gate, looking to score an upset with a highlight-reel knockout. Then, Anthony Smith‘s experience took over.

Smith caught Clark in a clinch, took him down and ultimately submitted him via triangle choke at 2 minutes, 34 seconds of the first round Saturday night in the main event of UFC Fight Night in Las Vegas.

Smith is tied for the most finishes in the UFC light heavyweight division since he moved up 205 pounds in 2018 (5). This was Smith’s seventh straight UFC main event, the longest streak ever for a fighter who has never won a UFC title.

The bout was supposed to be the co-main event of the card, but that changed Friday morning. Curtis Blaydes vs. Derrick Lewis was the scheduled main event, a major heavyweight contender bout. But Blaydes tested positive for COVID-19 and the fight was canceled. Smith and Clark were originally slated to fight a three-round bout, but both men offered to fight five rounds like a typical UFC main event.

“I think I owe it to myself,” Smith said in his postfight interview about why he wanted to go five rounds. “I owe it to the fans. I owed it to [UFC president] Dana [White] and the UFC. I’ve had a couple bad performances. That’s not my style. I don’t have boring fights.”

It looked like Smith might have been in trouble early against the younger, stronger Clark. But after weathering the flurry, Smith took Clark down with a bodylock. He ended up on the bottom with Clark on top after a scramble. That wasn’t a problem for Smith. The UFC light heavyweight veteran slickly threw up a triangle choke with his legs, and soon after Clark had to tap out.

“It’s not like he hurt me,” Smith said. “It’s almost like you got pushed over because you’re on one leg. We knew that was going to happen.”

Saturday’s card took place in front of no fans at the UFC Apex, a venue across from the UFC’s corporate campus in Vegas.

Smith (34-16) had lost two straight coming in and was trying to get back on track following a unanimous-decision loss to Aleksandar Rakic in August. The Nebraska native fought then-champion Jon Jones for the UFC light heavyweight title in a losing effort at UFC 235 in March 2019. Smith, 32, has fallen out of ESPN’s top-10 light heavyweight rankings, but is still just a short winning streak away from being a contender once again. Smith has an incredible 94.1% finishing rate in his career with 13 submissions.

Clark (12-5), meanwhile, had never had this kind of platform before. The South Dakota native won two in a row coming in, but had never even fought as high as a co-main event in the UFC. Clark, 30, is a longtime teammate of Jones at JacksonWink MMA in Albuquerque, New Mexico.