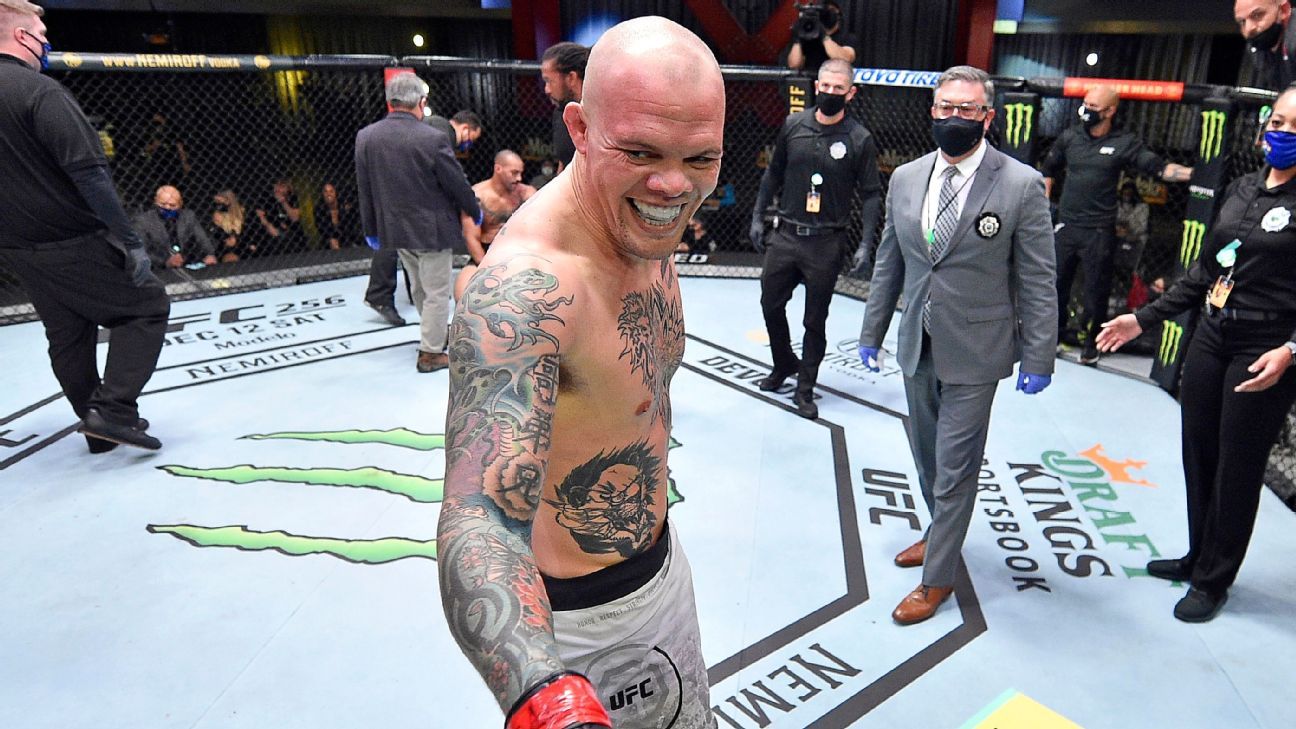 ESPN’s panel of Brett Okamoto, Marc Raimondi and Jeff Wagenheim breaks down the biggest stories coming out of Saturday’s UFC Fight Night, including what’s next for Anthony Smith after his first-round submission win over Devin Clark. The fight was a substitute main event after the Curtis Blaydes–Derrick Lewis fight was canceled.

Wagenheim: Three rounds? Five rounds? Anthony Smith might as well have called for the replacement main event to be a 12-rounder on Saturday night. By getting the submission finish just 2 minutes, 34 seconds into his fight with Devin Clark, Smith was not called upon to test his stamina — unless you consider the career stamina of a man in his 50th professional fight. 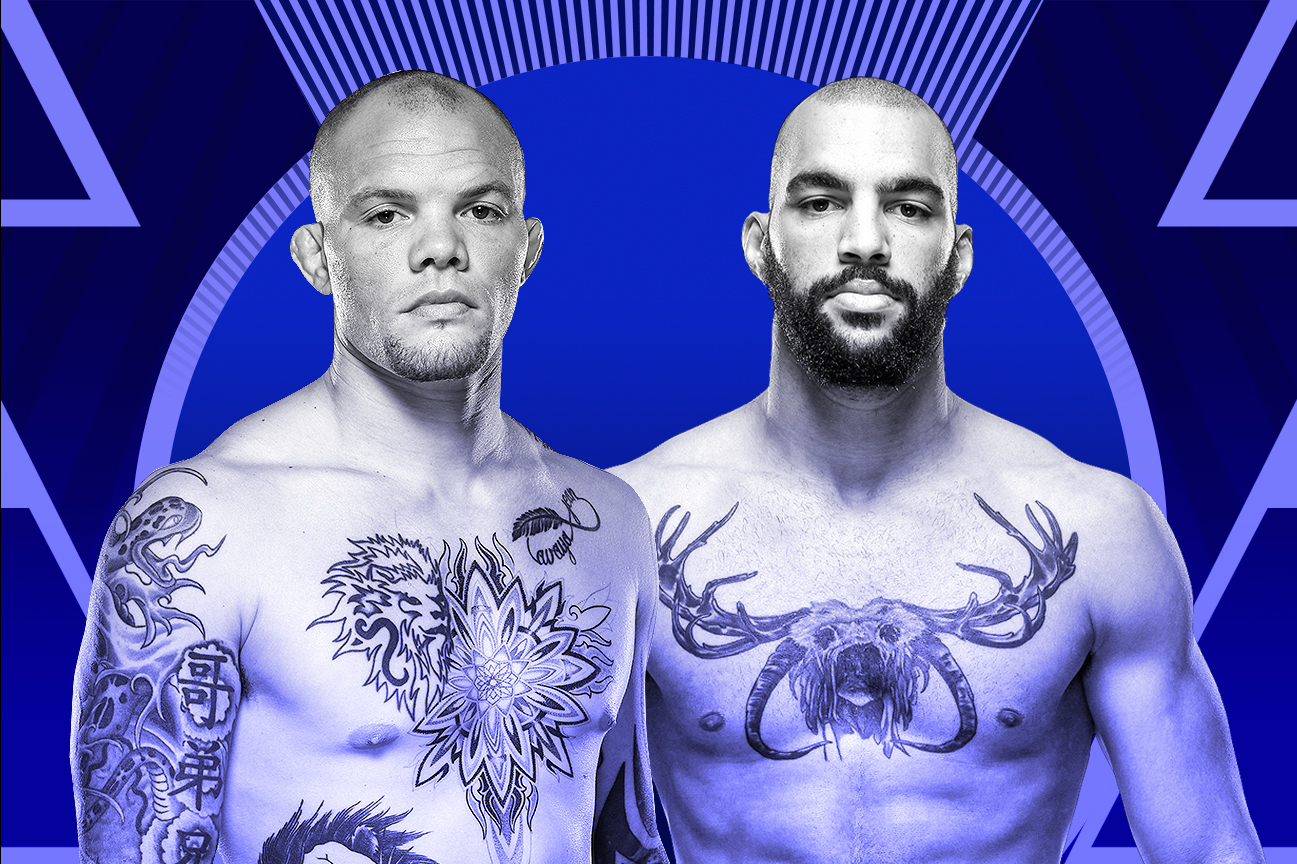 All fights from UFC Fight Night: Smith vs. Clark will be available to watch on ESPN+.

Just last year, Smith was challenging Jon Jones for the light heavyweight title. He lost that night, and it started a downward run of three losses in four fights. The UFC still somehow had him ranked No. 6, but he had fallen out of the ESPN rankings and others. At age 32, was he fading away?

Smith had an answer for that, which he delivered not just with his performance but in words spoken — no, yelled — while he was still inside the Octagon. As he stormed around right after his win, Smith yelled out to anyone who would listen, “I ain’t going nowhere, motherf—ers!” Well, as Muhammad Ali once said, “It ain’t bragging if it’s true.”

Saturday night, Smith looked like a fighter going nowhere but up. It wasn’t simply that he found his way back into the win column, although that in itself will sure make his trip home to Omaha, Nebraska, a more pleasant ride. But look at how he got the “W.” He began by taking down a former junior college national champion wrestler. Then, when his first submission attempt was rebuffed and Clark reversed position on him, Smith did not become the least bit demoralized. He just latched on a triangle choke from the bottom to bring an early close to the scheduled five-rounder.

It was Smith’s first victory in over a year, but once again he showed that when he does win, he does so with gusto. His last eight victories, dating back to 2016, all have come by finish. Next?

It’s tough to say who’ll next share the cage with Smith. He declined to make a specific callout, saying his plan is to build slowly back toward the top. He’s already fought several members of the top 10. So maybe Nikita Krylov? That sounds about right. For doing the UFC a solid this weekend, I suspect that Smith will get a booking that he can build upon. And for his performance on Saturday, he deserves it.

Late in the second round, @Thunder92Baeza locked up an arm triangle to force the tap 💪 #UFCVegas15 pic.twitter.com/E1kHXNEX12

Okamoto: No one impressed me more on Saturday, or all week for that matter, than Baeza. He is off to a blistering start in the UFC. He’s 3-0 with three finishes, including a knockout of Matt Brown back in May. His talent on the feet is obvious, but he showed us a new wrinkle in this one, recording the first submission win of his career.

The 28-year-old is undefeated, and even though he only has 10 fights under his belt, he looks seasoned beyond his years. Saturday’s win was extremely impressive, against an opponent with more than twice as many professional bouts.

Baeza, not that this is completely necessary in combat sports, but the man has charisma. He called commentator and UFC lightweight Paul Felder, “Mr. Felder” all week. He shared a remarkable story about an unlicensed amateur fight against UFC welterweight Niko Price years ago. And had me riveted with a story about how he got his nickname “Caramel Thunder,” — long story short, he thinks his friend pranked him by feeding it to a ring announcer during his amateur career. I don’t know how high Baeza will ultimately go, but he’s got loads of potential.

The best finish of the night belonged to Gina Mazany

Raimondi: Liver-kick knockouts are rare enough in the UFC. Never mind front kicks to the liver leading to a finish. But that’s exactly what Mazany did to Rachael Ostovich on Saturday night. She took a stutter step ahead and landed a left front kick to Ostovich’s body, which crumpled Ostovich. Referee Mark Smith had to jump in to stop the fight. Mazany landed the same kick earlier in that round, which hurt Ostovich. She doubled over, but Ostovich survived the shot. She couldn’t do it a second time.

So freaking proud of Gina!!! So glad she’s part of the Glory fam now and all her hard work is paying off!! #UFCVegas15

The kick wasn’t just something for Mazany’s highlight reel. It led to her first UFC win in three years and potentially staved off a second release from the promotion. For “Danger,” it represented something much bigger — that her hard work is paying off. Mazany moved from Las Vegas to Missouri this year with her fiancé Tim Elliott, a UFC flyweight. There, she started training under highly regarded coach (and UFC fighter) James Krause and reshaped her body moving down from bantamweight to flyweight. The big changes led to a huge success and potentially a run in a new division.