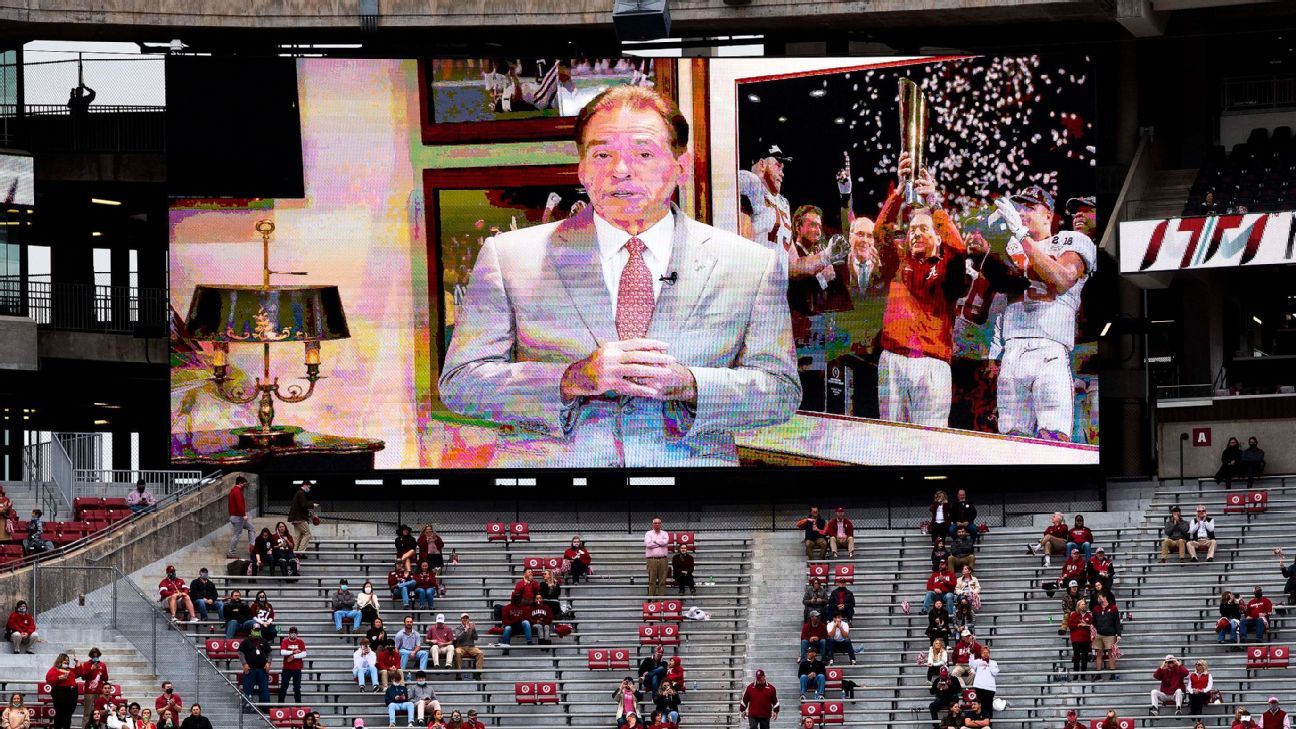 As the hours and then the minutes ticked down to the unlikeliest of Iron Bowls for Nick Saban, he couldn’t help but think about his late father, Nick Sr. — “Big Nick,” as he was called back in their Monongah, West Virginia, community.

Saban, forced to watch Alabama’s 42-13 dismantling of Auburn from home Saturday in isolation after testing positive for COVID-19, did so restlessly, passionately and with a bit of a heavy heart.

The only other time in his career he wasn’t on the sideline with his team for a game came when he was a first-year, 22-year-old graduate assistant under Don James at Kent State. Saban’s father died suddenly of a heart attack two weeks into the 1973 season at the age of 46.

“I went home for my dad’s service when we played San Diego State the third game of the season,” Saban told ESPN. “That was 47 years ago. Man, that was hard, and this was, too.”

Hard, but not a lot different for Saban, the ultimate creature of habit.

“I did just about everything, really, the same. I just wasn’t at the stadium,” he said.

That included getting up on Saturday morning long before the sun rose, placing a few calls to staff members as early as 6:30 a.m. and preparing for meetings via Zoom.

Saban set up his Saturday operation upstairs in his spacious bonus room that he uses for entertaining recruits and their families. His wife, Terry, is also quarantining, and she stayed downstairs.

Terry, or Miss Terry, as Saban calls her, told ESPN it was her “first real peek into the ‘The Process.'”

“He showered, put on his gray suit and red tie, had a couple hours where he did his notes and then did a few Zoom meetings,” Terry said. “I was privy to the X’s and O’s, but it was more the motivational stuff. … I actually got teary-eyed at one point and thought to myself, ‘Wow, I’m ready to play.'”

Saban’s two kids, Nicholas and Kristen, dropped by the house to say hello and pick up their tickets before the game, but they couldn’t come inside. Nicholas came onto the back porch, and Kristen high-fived her dad through the window.

She continued her tradition, dating back to Saban’s days at LSU, of giving her dad a shiny new penny for good luck. Only this time, she had to slide it under the bottom of the door.

It was a surreal feeling back at Alabama’s Mal M. Moore Athletic Facility.

Jeff Allen, Alabama’s head athletic trainer, is the only member of Saban’s football staff who’s been there since Saban arrived in 2007. Allen found himself walking to Saban’s office that morning to give him an update on injuries.

“Almost by habit, I walked by his office to give him a report and was like, ‘Man, he’s not here,'” Allen recounted. “It just didn’t feel right, especially in pregame and in the locker room. You sort of got a glimpse of what life would be like without him, and I didn’t like it.”

Saban never breaks his game-day routine, so some on the Alabama staff were legitimately wondering if they should take Saban’s game-day coaching attire to his house along with his normal pregame meal.

But on this day, Saban switched it up a bit.

Saban addressed his staff at 9:15 a.m. as he would normally, only this time virtually, and then the entire team later that morning. And despite being at home, he was wearing his customary suit and tie.

“Just a reminder that he might not have been there physically, but he’s always there,” one staffer said. “It’s like this voice from heaven. He’s there, and don’t think he’s not. That’s just the tone he sets, and it’s never going to change … even when he’s watching from home.”

Per NCAA rules, Saban had to cut off all communication with the staff and team 90 minutes prior to the game. Offensive coordinator Steve Sarkisian stepped in for Saban as game-day coach on the sideline.

“Sark asked me what I wanted him to say to the team in the locker room,” Saban recounted. “I said, ‘Hey, you can’t be me. You’ve got to say what you’ve got to say, but here are the three things I would hit on before you go out.’

“I just didn’t want to affect his ability to call the plays and make corrections with the offense and all that stuff. I was really impressed with Sark and the job he did, all of the guys. It went as smoothly as it possibly could.”

That said, Saban was his usual animated self during the game. He had two TVs side by side with different feeds, the CBS broadcast and then the live feed from different vantage points in the stadium that the coaches use to evaluate and grade the film. The live feed is a few seconds ahead of the TV broadcast.

And while he might have seen his Aflac commercial a few times (yes, the one with the duck), Saban turned the volume from the CBS broadcast down.

“I had it on, but didn’t listen to the commentary,” Saban said. “I didn’t want to listen to them and try to watch both copies of the game. What I didn’t realize is that there’s a little bit of a delay between what’s on TV and the live feed, so I could actually watch the plays twice.

Always the perfectionist, Saban’s take on a play would oftentimes differ wildly from Terry’s.

“When there was a bad play, I was cursing the TV. When there was a good play, she was screaming, so we were kind of polar opposites,” Saban said. “And sometimes, I’d hear her cheering and would wonder, ‘What in the hell is she cheering about?’ “

Terry already had a hint of what was coming during the game. She said she listened all week during practice to Saban venting to analyst Charlie Strong on the phone while Saban watched on his monitor from home. Strong is the liaison while Saban watches practice, and Saban’s setup at home allows him to see everything, too, in a lot of cases better than he would if he were actually on the practice field.

“Poor Charlie Strong!” Terry said. “I have tried to explain to Nick that yelling things during practice [on the phone] does not help, that he’s only yelling in Charlie’s ear, not at the players. I explained that if he calmly and succinctly makes his point, that Charlie would be better able to pass it on to the players. He looked at me like I had two heads, but I think it’s starting to sink in.”

“Yes, I was cheering and clapping and jumping around a bit, but a couple of times it scared me and I froze when I heard a booming, screaming deep voice from upstairs,” Terry said. “At first, I thought, ‘What the heck was that?’ Then I realized Nick was coaching … coaching the TV.

“Old habits die hard, and I wondered if he threw his coffee cup since he didn’t have a headset.”

The worst time for Saban was the 90 minutes prior to kickoff when he was cut off from his staff and players.

“I just sat there and kind of watched pregame warm-up on the live feed like a freakin’ fan sitting in the upper deck,” Saban said. “You talk about weird. That was different.”

At one point, during that 90-minute hiatus before the game, Saban thought about doing what he did the day before on Friday.

“I got so tired of being cooped up in here that after the walk-through I got in my car and took a ride by myself,” Saban said.

Asked where he went, Saban said, “Nowhere. I just rode around; anything to get out of the house.”

As the game ended Saturday, and Alabama had avenged last season’s 48-45 loss to Auburn, Saban couldn’t wait to reconnect with his team.

Allen walked into the locker room, looked at his phone and saw he already had two missed calls from Saban.

“He was checking on injuries, just like he would if he were here,” Allen said. “That’s exactly what would have happened had he been here.”

It was the same with Saban’s postgame speech to the team. He told them via video how proud he was of them for not allowing the distractions of the week to affect them and reminded them how important it was, especially during a pandemic, to have that “So what? What’s next?” kind of attitude. Saban then led the team prayer, and they sang the Alabama fight song.

Never one for reminiscing, Saban admitted how much he missed being there with his players and coaches, especially because it was Senior Day.

“Just not being a part of the spirit of the game, especially that game, the Iron Bowl, and what it means to so many people in our state was tough — and I mean really tough,” said Saban, whose team was ranked No. 1 in the College Football Playoff rankings last week.

Saban, whose positive coronavirus test result came back last Wednesday, said Monday he expects to be on the sidelines for this weekend’s game against LSU. He said he’s yet to have a fever, and other than a runny nose and a little bit of a cold, hasn’t had any other symptoms.

“It’s hard to explain how much being out there around the players and coaches means to you,” Saban said. “And when you can’t be out there, it makes you realize how much more you would miss it.”

Allen said that could be an ominous sign for the rest of the college football world.

“He may never quit coaching,” Allen said with a laugh. “This whole experience only reinforces that.”