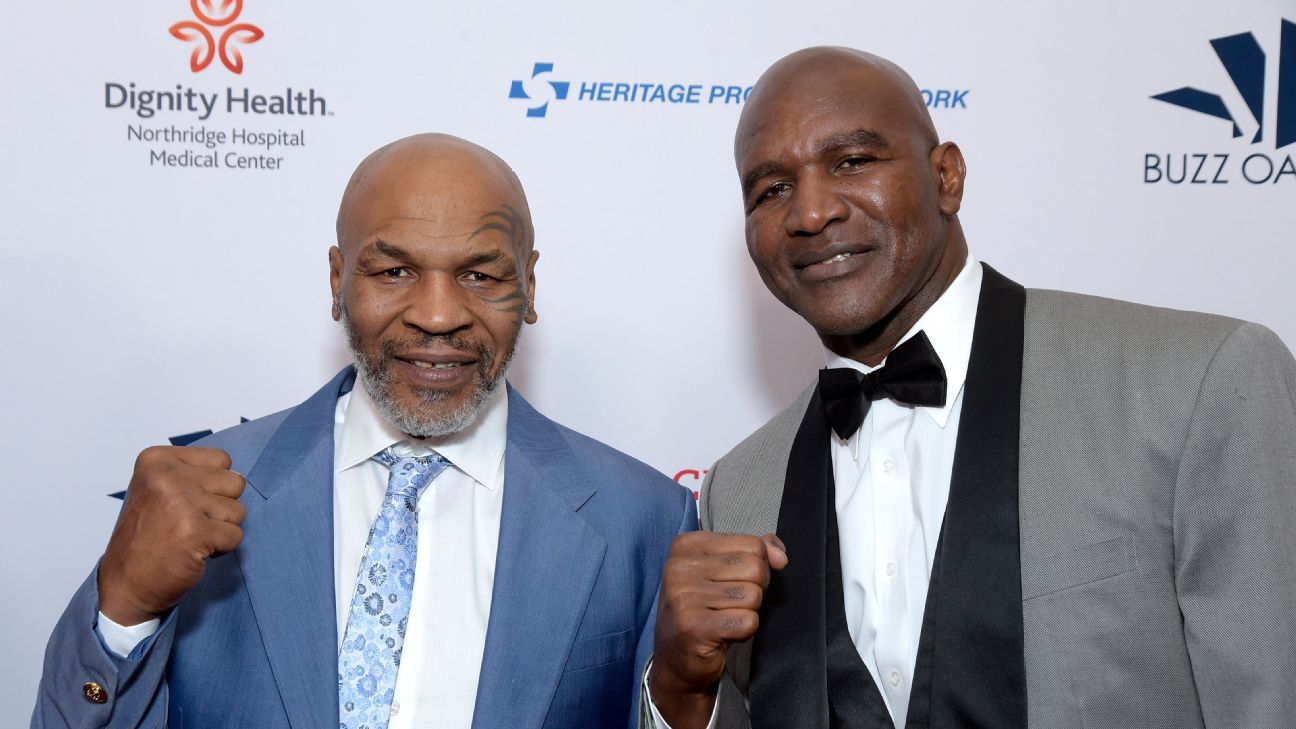 Nearly 25 years after beating him twice to win and retain the WBA heavyweight title, Evander Holyfield wants another piece of Mike Tyson.

After watching Tyson look surprisingly solid for an old legend in his exhibition match vs. Roy Jones Jr. Saturday night at the Staples Center in Los Angeles, Holyfield says a trilogy fight between him and Tyson would be “a global event and the only fight that anyone wants to see.”

“My side tried to make the fight happen and we got nothing but excuses,” said Holyfield in a press release on Tuesday. “Now I can see why he wanted a tune-up fight before thinking about fighting me.

“No more excuses. This is the fight that must happen for both our legacies. Saturday night you said you were ready to fight me, so sign the contract and get in the ring, Tyson. The world is waiting and it’s on you now. I’m ready.”

After the 54-year-old Tyson delivered some notable punishment to 51-year-old Jones Jr., in a fight that ended in a draw, he said he plans to get in the ring for another exhibition fight in the future though it may be with a different opponent. He didn’t seem to shy away from facing Holyfield next, but noting that they may need to cut out the middle man to make the bout happen.

“Maybe Evander needs to talk to me because every time my business associates talk to his business associates, it doesn’t turn out well,” Tyson said after the fight Saturday. “So, I don’t know. If you could see what we made tonight, if these guys really care about the welfare of Evander, they would have had this fight with Evander. Maybe we’ll do another but whoever he’s with, whoever is handling him is totally wrong.”

Tyson and Jones Jr. both were set to receive a guaranteed $1 million purse with Tyson reportedly in position to make $10 million after pay-per-view buys came in. The 58-year-old Holyfield told “I am Athlete” podcast last week that “I wasn’t getting in the ring for less than $25 million.” So it seems clear they’ll have to work out the financial asks for a Tyson-Holyfield exhibition to happen.

Holyfield hasn’t participated in a sanctioned boxing match in nearly 10 years, and it had been over 15 years for Tyson. But as Tyson showed Saturday night while tenderizing Jones Jr.’s ribs, the power is often the last trait to leave a fighter.

Tyson-Holyfield was one of boxing’s best rivalries of the 1990s. In November 1996, Holyfield, who was in the midst of a comeback from retirement, shocked a prime Tyson by scoring a 11th round TKO victory — a significant upset. Holyfield won the June 1997 rematch, too, by fourth-round disqualification in controversial fashion as Tyson twice bit his ear (the first time ripping a piece off) in retaliation for what he perceived to be intentional headbutts. Tyson, who had been losing the early rounds, was docked two points after the first bite and then chomped again.

That was the last time we’ve seen the two former heavyweight champions in the ring together. But if both fighters can work out the details, we could see some version of the trilogy in 2021.