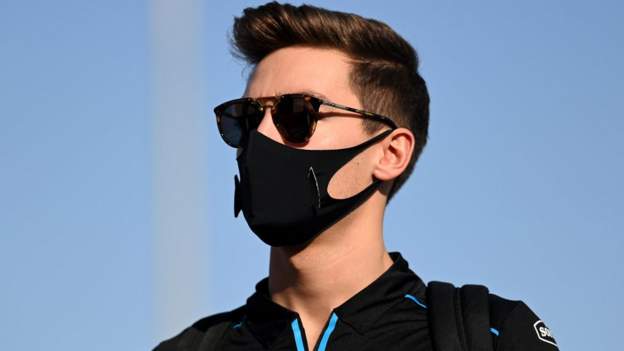 Williams driver George Russell is the leading contender to replace Lewis Hamilton at Mercedes for this weekend’s Sakhir Grand Prix.

Mercedes have guided Russell’s career since 2017 and have approached Williams to see if the team would release him.

The fall-back position is for Mercedes to use their reserve driver Stoffel Vandoorne.

A Mercedes spokesman said the team “did not comment on speculation”.

Russell was Mercedes reserve driver in 2018 before they released him to Williams on a three-year contract from the start of the 2019 season, and is highly rated by the team as a candidate for a potential future drive.

The 22-year-old Briton has tested several times for Mercedes but running him in Bahrain this weekend – as well as potentially the season-closing race in Abu Dhabi a week later if Hamilton does not recover in time – is a good opportunity for the team to assess his development in a competitive environment.

Mercedes inquired as to Williams’ position on Russell in the summer before they confirmed Valtteri Bottas for the 2021 season, but were told they were not prepared to release him.

However, that was under Williams’ previous management before their sale to the investment group Dorilton Capital in August.

Talks are ongoing, and if an agreement can be reached for Russell to drive for Mercedes, it is not clear who would replace him at Williams.

Their reserve driver is Briton Jack Aitken, who is in his third season in Formula 2 and has not raced in F1.

Vandoorne, who races for Mercedes in Formula E, could potentially be made available in a swap, or they could go for an experienced driver such as German Nico Hulkenberg, who has substituted three times at Racing Point this season after positive coronavirus tests for their drivers Sergio Perez and Lance Stroll.

Hulkenberg made his F1 debut for Williams in 2010, and took pole position in the penultimate race of the season in Brazil.

Williams also have a development driver in Dan Ticktum, another Briton who races in Formula 2 this year.