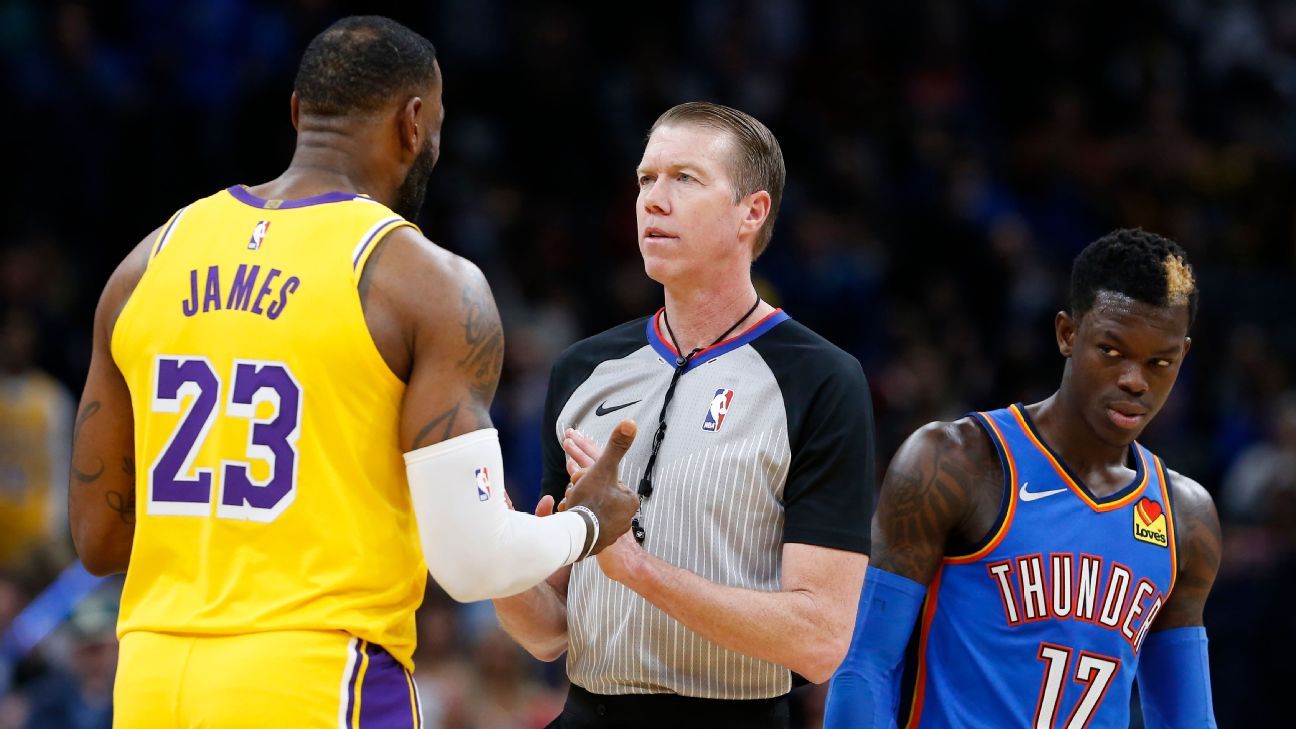 LOS ANGELES — LeBron James could be one and done playing the 1 for the Los Angeles Lakers. The newly acquired Dennis Schroder says he intends to start at point guard for the defending champions.

“I did this off the bench stuff already in two years with OKC,” Schroder, the reigning Sixth Man of the Year for his role with the Oklahoma City Thunder, said on an introductory videoconference call with reporters Monday. “I think I try to move forward and I think with [Anthony Davis] and LeBron I can be helpful as a starter in the PG position.”

Schroder said that he has not spoken to Lakers coach Frank Vogel about his desire to start, however his representatives, Alex Saratsis and Jeff Austin of Octagon, discussed that aspect with the Lakers front office prior to L.A. trading guard Danny Green and the No. 28 pick in the draft to the Thunder to complete the deal.

“I think my agent talked to the organization before they was trading me,” he said “So, that’s that.”

The Lakers have not settled upon their starting lineup, sources told ESPN. While Schroder will be considered for the starting point guard spot, he could also be asked to fill in off the bench, sources said.

James, who turns 36 next month, led the league in assists for the first time in his career last season, averaging 10.2 per game, and led L.A. to the title shifting from his traditional position of small forward to point guard.

While James has always played with the ball in his hands — playing the unofficial point forward position — the change did affect his scoring. His points per game dipped from 27.4 in his first season in L.A. to 25.3 and his shot attempts per game were cut from 19.9 to 19.4.

Schroder, who averaged 18.9 points and 4 assists per game as Chris Paul‘s backup for the Thunder last season, said he can alleviate some of James’ responsibilities as the four-time champion enters into his 18th season. “LeBron don’t have [Notes:to have] so much stuff in his mind,” Schroder said. “I can bring it up, call a set play or whatever and put him in a position to score. I think him to play off-the-ball, I mean, is I think great. I think that’s the reason why they brought me in.”

If Schroder does start, Vogel will have to get creative with the backup point guard role, based on the Lakers’ current roster construction. Rajon Rondo, who was the primary backup last season, signed with the Atlanta Hawks as a free agent. And the Lakers waived Quinn Cook, who also played the position.

L.A. is entering training camp with two other ball handlers in Alex Caruso and Talen Horton-Tucker on the reserve roster, but no players that have traditionally identified as a point guard. The Lakers also signed Zavier Simpson to an Exhibit 10 contract, which would offer him a $50,000 bonus to play for the Lakers’ G League team, the South Bay Lakers, if he does not make the roster. Simpson averaged 7.9 assists per game as a senior at the University of Michigan.

Schroder is in the final year of his contract and will make $15.5 million this season. He was asked if he viewed the Lakers as a long-term fit.

“End of the day, I just try to focus on this year,” he said. “But if it’s a fair deal and everything goes right, then, of course, I think long term. But I just try to lock in now for this season, take it day by day and let’s see if we come to an agreement on that.”

The eight-year veteran was in his native Germany when the trade with the Lakers was consummated. He has since relocated to L.A. with his wife and two young children. He took a break from a workout on the court at the Lakers’ practice facility in El Segundo, California on Monday to conduct the videoconference on the phone, while wearing a purple Lakers’ shirt and yellow headband.

“It’s an honor to be here in this organization,” Schroder said. “I think they brought me in for a reason. You know, we’ll try to get the repeat. I think for this organization, winning 17 championships, this history is big-time. And to be in the biggest platform in the NBA, biggest team, biggest organization, I think I’m excited. I’m honored that I’m here. And I can’t wait to get started.”