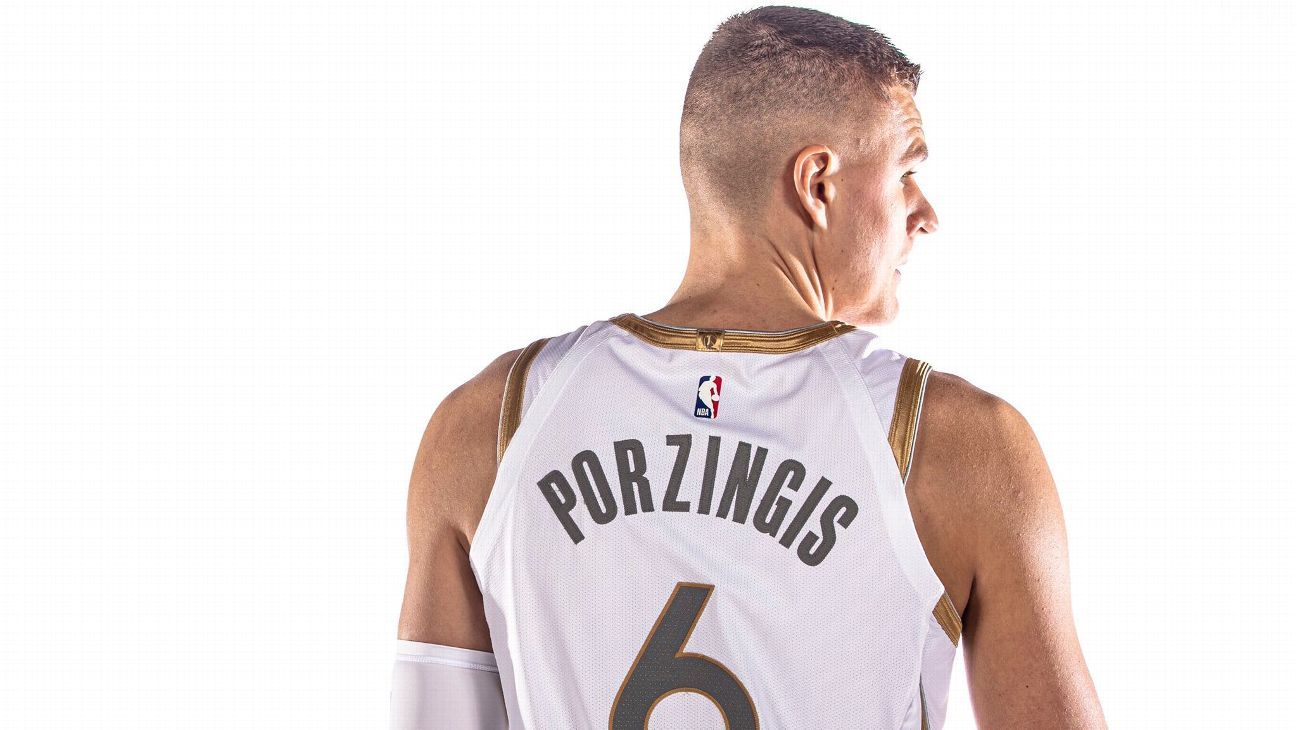 The 2020-21 NBA season is fast approaching, with play scheduled to begin on Dec. 22. As teams prepare for the upcoming campaign, many will be wearing new threads on the court.

Nike and Jordan Brand have been unveiling their new looks across the league throughout the offseason, as various franchises will see their uniform palettes refreshed.

Teams such as the Atlanta Hawks, Charlotte Hornets and Toronto Raptors will wear completely new uniform sets to start the season, while others will show off new City and Throwback Edition uniforms on select days.

Check back here for the latest uniform updates as they’re released by the teams.

Grit and Grind transforms into Memphis Soul for the Grizzlies, as their City Edition uniforms will celebrate the life of singer/songwriter Isaac Hayes and the legacy of Stax Records. The uniforms will feature a black base with vertical stripes, which represent the grooves on Stax’s vinyl records. Gold and turquoise trim finishes the look, inspired by Hayes’ 1972 Cadillac Eldorado (which is displayed at the Stax Museum of American Soul Music in Memphis). Hayes’ signature sunglasses and a Stax logo are also part of the design.

The Mavs new uniforms will pay homage to two anniversaries in franchise history, as the team will celebrate its 40th season in the NBA along with a nod to their first championship a decade ago. The “Legacy Is Everything” look features a white uniform with gold and silver trim along with the number 40 on the waistband.

The Jazz are going #DarkMode for the 2020-21 season as their City Edition uniforms are the evolution of the gradient, red-rock theme from last season’s City Edition uniform. Utah will also have a court to match the new uniforms, highlighted by the painted area in the key matching the color bands on the uniform.

The Celtics have 17 championship banners hanging from the rafters at TD Garden, and now they’ll have five on the court as well. The team’s new City Edition jerseys are inspired by the design of Boston’s championship banners, with the “Boston Celtics” wordmark appearing above the number.

From the rafters to the parquet, it’s all about #TheBanner. pic.twitter.com/YVwvba5U1j

The Pistons revamped their “Motor City” look to include “Detroit, Michigan” under the front number. The logo on the front of the shorts pays homage to Woodward Avenue, “Detroit’s Main Street.”

Denver’s look for 2020-21 sticks with the team’s popular rainbow skyline design, rendering it in a color the team is calling “Flatirons Red,” inspired by the landscape of Colorado.

The Thunder released the latest City Edition uniform on Oklahoma Statehood Day and for good reason: the jersey bears the state’s name for the first time and is a tribute to the 46th state. The colors were inspired by Oklahoma’s sunsets.

For the past three seasons, the Spurs’ City Edition jerseys had featured a camouflage pattern, but this year the team switched things up, introducing a look based on the team’s popular “Fiesta” warm-ups from the 1990s.

While the color scheme was previously used on warm-ups and in the team’s logo, this is the first time in Spurs history it will appear in the on-court jersey and shorts — which, despite what the Coyote says, are not optional for players.

The Pelicans’ new City Edition look is a tribute to the flag of New Orleans, with a red, white and blue color scheme and three gold fleur-de-lis across the chest and another on the waistband.

This uniform keeps it simple, with only the shorts bearing “NOLA.”

“No little plans.” That’s the stitching above the tag on Chicago’s new City Edition uniforms, part of a quote from Daniel Burnham, the city planner after the great Chicago fire of 1871. The new look features a geometric pattern up the side that resembles the art deco shape of the city’s buildings and a font inspired by directional signage at the United Center.

A jersey honoring the best city in the world. pic.twitter.com/ESq3o2pjBL

Of course, the shorts also have the longtime Bulls diamond.

Black is back in Phoenix as the Suns took design cues from Deandre Ayton and Kelly Oubre Jr. for their City Edition “The Valley” uniforms for 2020-21.

The jersey features a pixelated desert sunset that also forms the broad outline of Camelback Mountain, a fixture on the landscape of the greater Phoenix area.

The Hornets will pay homage to the city of Charlotte, North Carolina, and their history in two ways with their City Edition uniforms.

Philadelphia’s new City Edition uniform for the 2020-21 season will feature black as the primary color, the first time the 76ers will wear black since the 2008-09 season.

Zach Lowe spoke with Ben Simmons, who helped design the new uniforms; Simmons mentioned that his inspiration for the jerseys was to honor Sixers legend Allen Iverson.

The Magic pay respect to the state of Florida’s official fruit and the team’s iconic throwback uniforms with their City Edition uniforms.

The Magic dropped some new threads too 🍊 👀

Orlando will wear white as a primary color while featuring orange pinstripes and “ORL” across the chest.

The “We Believe” era of the Warriors gets the City Edition treatment for the 2020-21 season, as the franchise will put “Oakland” on its uniforms for the first time in team history.

Oakland is and will always be a part of our team’s identity.

“Oakland Forever,” presented by @Rakuten, is a nod to the We Believe era and its turning point in Oakland’s basketball history.

To honor the Town, we partnered with Nike to put a spin on these classic uniforms. pic.twitter.com/d7nUAJLbzM

The “Oakland Forever” jerseys are inspired by the franchise’s look from 1997 to 2010, as the uniforms became iconic after the Warriors upset the No. 1 seed Dallas Mavericks in six games in 2007.

Atlanta partnered with the estate of Dr. Martin Luther King Jr., the NBA, the National Basketball Players Association and Nike on the release of its 2020-21 MLK Nike City Edition uniform.

The black, old gold and white colorway is a nod to King’s membership in the first Black Greek-letter fraternity, Alpha Phi Alpha.

The Blazers unveiled their City Edition design, which pays homage to the team’s home state of Oregon. According to the team, “the uniform celebrates the unique beauty of Oregon’s landscape as well as acknowledging and honoring the tribal nations throughout what is now considered Oregon who have called this land their home from the beginning.”

For the first time in team history, “Oregon” is stitched across the chest displaying the pride for our state using the font from the iconic sign. https://t.co/vGvBRBkVw5 pic.twitter.com/lo2BCEl4IP

With “Oregon” stitched across the chest of the uniform in an iconic font, the earth-tone colors were chosen to represent the “beautiful landscape of Oregon.”

New throwbacks for Brooklyn and Memphis

The Nets are bringing back a classic ’90s look with their uniforms and a new court for the 2020-21 NBA season. Brooklyn will sport a red, white and blue uniform with a tie-dye pattern that will be matched with a new floor in the Barclays Center.

The look pays homage to the 1990-97 Nets, with players such as Drazen Petrovic, Kenny Anderson and Derrick Coleman popularizing it during the team’s New Jersey days.

30 years ago the New Jersey Nets found a new look. This year, the Brooklyn Nets are paying homage to a classic.

The Grizzlies will also flash a throwback look with their uniforms and on the court in celebration of the franchise’s 20th season in Memphis, Tennessee.

The black uniforms feature the familiar red, turquoise and white with “Memphis” across the chest.

The Mavericks will use their Hardwood Classic uniform to pay homage to their original look from the 1980-81 season. Somewhere, Brad Davis is pleased.

The Hornets will have new Association and Icon Edition uniforms featuring the double-pinstripe look they wore from 1997 to 2002.

The Hawks will rock a new uniform set for the 2020-21 season, inspired by the franchise’s signature colors and history in Atlanta since 1968.

The Raptors will look to honor their past with their uniform looks for the 2020-21 season. The team has unveiled three of the five uniforms — Association, Icon and Statement Edition uniforms — thus far, with two more releases coming before the start of the season.

Which North are you? #WeTheNorth pic.twitter.com/xmATeh0AaD

The white (Association) and red (Icon) uniforms feature a new chevron across the chest, while the black and red uniform (Statement) is meant to evoke memories of the Raptors’ old “dinosaur” uniforms.