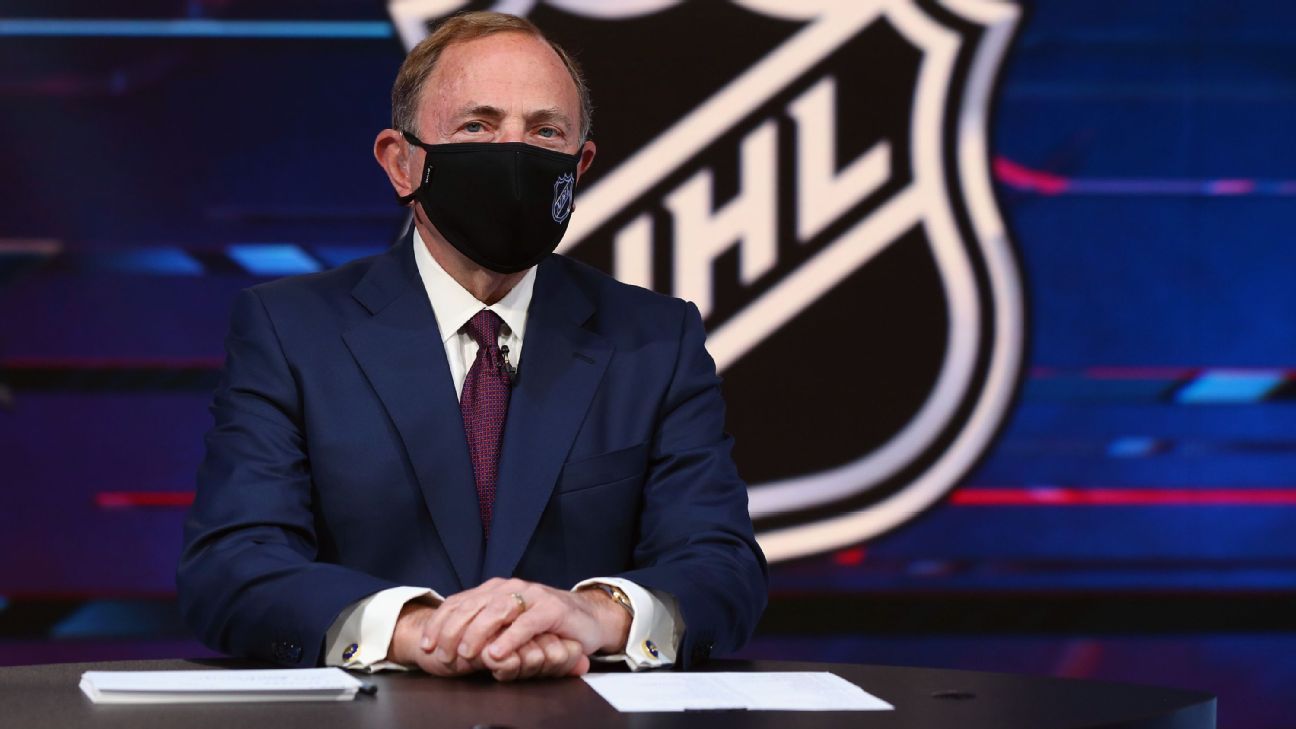 NHL commissioner Gary Bettman pushed back on the idea that owners have asked players to renegotiate the CBA that was signed five months ago, saying it is “unfortunate and inaccurate” how conversations with the NHLPA have been portrayed in the media.

Speaking at the Sports Business Journal’s “Dealmakers in Sport” panel on Wednesday, Bettman said: “We’ve been absolutely unequivocal with the players that we are not trying to renegotiate.”

Some NHLPA members, however, told ESPN last month that they were “blindsided” when owners asked them to consider new financial structures, including deferred compensation and changes to the escrow cap.

A four-year extension to the CBA was agreed to in July, along with a “return to play” plan that allowed the 2019-20 season to finish. Now, however, the sides are trying to agree to a plan to begin the 2020-21 season. Talks have stalled ever since owners told players they were looking for an additional cash flow — knowing they are going to absorb big financial losses kick-starting the season amidst the ongoing COVID-19 pandemic, and likely without full arena capacity.

“Under our deal, and the one we’ve had for more than a decade with the players’ association, whatever the revenues are the players only get 50%” Bettman said. “And if we overpay them and they don’t pay us back in the short term, they have to pay us back over time. There will be stressors on that system and we’ve had discussions about what those stresses are and how they might be dealt with, but we’re not trying to say, ‘You must do X, Y and Z.’ We’re trying to look for a way to continue to work together.”

Bettman said the projected Jan. 1 start date is still “a work in progress” that will be “influenced largely by medical experts.”

“Covid is going through a second wave, which could be worse than the first wave,” Bettman said. “Between Thanksgiving and the aftermath, and what [experts] think are going to happen at Christmas and the aftermath, we are taking our time and making sure that as we look for ways to move forward, we are focused on health and safety and doing the right thing.”

Bettman said training camps will not be significantly truncated, and he expected teams would request to play at least one or two exhibition games before the season begins. Bettman also said the Canadian border remains an issue and an all-Canadian division — where the seven Canadian teams only play each other — remains a strong possibility.

“We’ve got a lot of issues, a lot of problems to deal with,” Bettman said. “And the system is going to be stressed for everyone. And is there an appetite for working through all of those issues?”

Bettman outlined why he feels the burden falls both on the league and players.

“The fact is, if I’m a player, and I’m looking at a [salary] cap that’s going to be basically flat for the term of what is now a six-year collective bargaining agreement, and players for the next five or six years are going to be repaying what was overpaid — they have to ask themselves, does this make sense?” Bettman said. ” Just like there’s a lot of issues we have to deal with where we say, does this make sense? Having said that… what we’re focused on is trying to get through the 2020-21 season so we can be back in position for 2021-22 for normalcy. Based off everything we’re hearing from the medical experts…we’re hopeful and optimistic that we can return to normalcy by the time we get to ’21-22.”