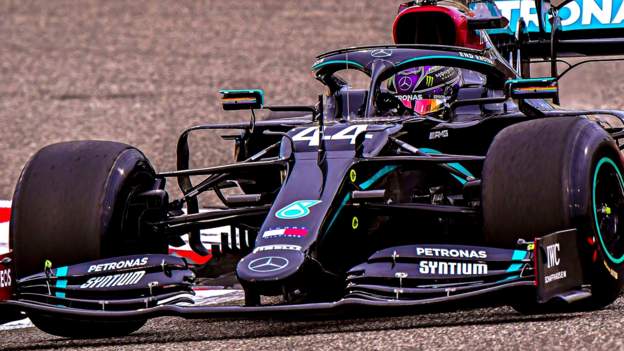 Pirelli says it will press ahead with plans to introduce a new tyre design for 2021, despite criticism from Formula 1 drivers.

Drivers complained the new tyres were slower, heavier and had worse handling than the 2020 tyres after testing them in practice at the Bahrain Grand Prix.

Isola said they were needed to reduce the risk of stress-induced failures.

A number of drivers have suffered tyre failures in races this year.

Some have been traced to external factors, while others have been caused by the extreme loads generated by F1 cars, particularly the incident in which world champion Lewis Hamilton finished the British Grand Prix on three wheels after a front tyre collapsed on the final lap.

Hamilton’s Mercedes team-mate Valtteri Bottas and McLaren’s Carlos Sainz suffered the same failure in the race for the same reasons.

Pirelli has increased the inflation pressure in the tyres to make them more robust, but has designed a new construction for 2021 that increases structural integrity and can be run at lower pressures.

Hamilton, Red Bull’s Max Verstappen and Ferrari’s Sebastian Vettel all said after trying the new tyres in Bahrain they hoped they would not be used again, and a number of other drivers expressed their dissatisfaction.

But Isola said the idea was to “improve the level of integrity” of the tyres amid the expectation of faster cars next year, rather than improving performance, and that the new design was “the right way to go”.

Isola added: “I need to understand first of all which are the main elements that are being criticised by the drivers.

“I would be very happy to talk to each of them to understand where we should touch something on the specification to make a tyre that is more in line with their specification, but it’s very late.”

He emphasised that the deadline by which the tyre design had to be submitted to governing body the FIA had passed on 1 November.

Isola admitted the new tyres reduced cornering performance, saying the difference was about 0.6-0.7secs, and emphasised the different shape of the new front tyres would probably have affected aerodynamics of the cars, reducing grip.

He said he was sure teams would be able to recover some of the lost lap time once they fine-tuned the cars to the tyres, but added: “That’s not the target; that’s not the point.”

There is a second test of the new tyres planned for practice at the final race of the season in Abu Dhabi on 13-15 December.

Drivers have been agitating since 2015 for tyres they can push harder and drive closer to the ultimate limit of the cars.

Pirelli’s F1 tyres are sensitive to overheating, which makes it difficult to push hard for much longer than a lap, or follow another car closely for an extended period.

Sainz said: “Safety is one of our highest priorities, if not the highest, but after two or three years on the same tyres, you expect some improvement in the performance or at least in the overheating issues we have been having recently.

“That’s why the drivers are talking a bit more about the tyre on that side, on the overheating, on the feeling of the tyre and making the tyre less prone to overheating which in the race is what limits us in the race from creating a better show and pushing ourselves as F1 drivers.”

Pirelli is working on a new tyre design for 2022 it hopes will behave in the way the drivers have requested. This will be fitted to cars designed to new rules aimed at closing up the grid and improving the racing.

Asked why Pirelli had not moved in this direction sooner, Isola said F1 as a sport had not made it clear this was the direction in which it wanted to go until the autumn of 2019.

“Indications are positive,” Isola said. “It looks like we are going in the right direction. Obviously there is a lot to do.

“We are trying to find space for 25 days of testing next year. It will be difficult, as you can imagine, with 23 races and Covid still there, but we are discussing with the teams how we can plan the tests for next year and I am confident we can have a product that is a step in the right direction.”