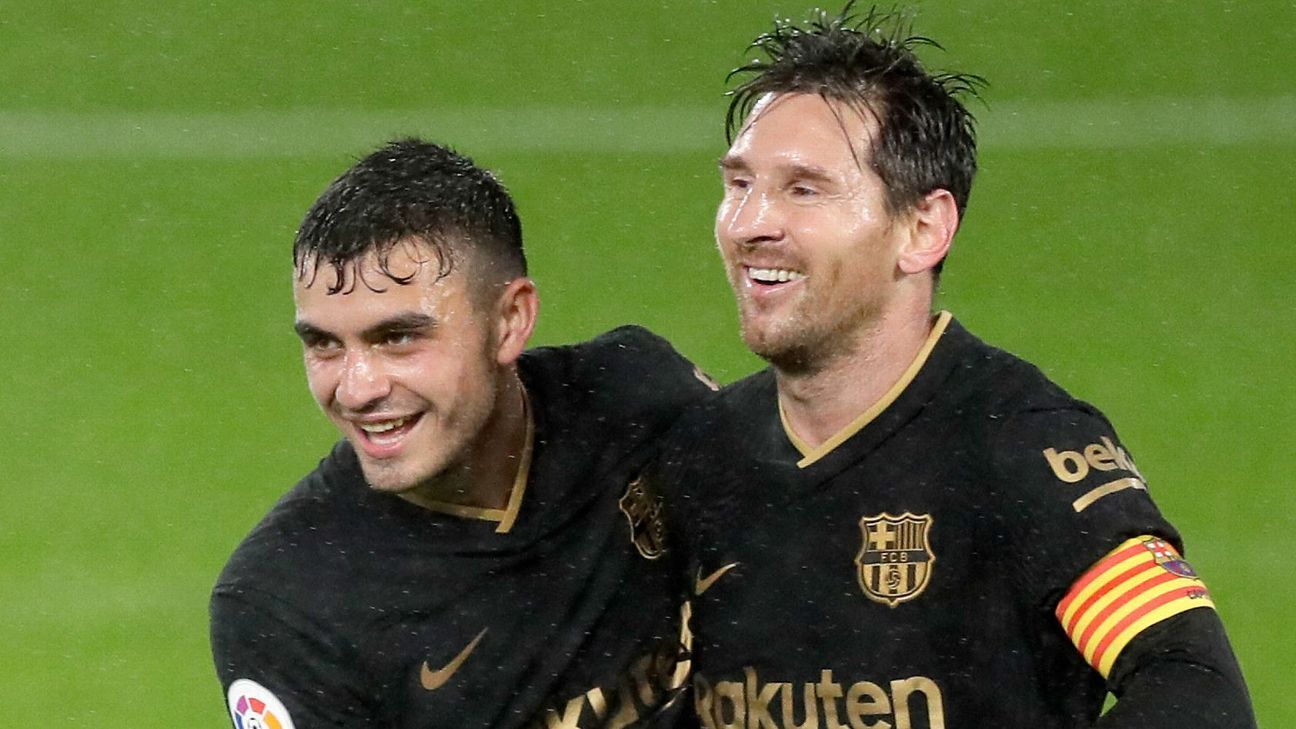 This is a column mostly about Barcelona‘s little marvel, Pedri — Pedro Gonzalez Lopez, as he was christened — but it will contain comparisons with Leo (Lionel Andres) Messi, so we had might as well start with the great man himself.

When Messi scored that brilliant goal against Osasuna on Sunday, it was just another gorgeous detail to add to his legend. He is a Newell’s Old Boys fanatic; you know that by now. Or you should after his “homage” to the late Diego Maradona at Camp Nou.

Newell’s are the better known club in Rosario, where Messi was born. The club which first saw his potential, which won his heart and where, in October 1993, his dad Jorge took him the 5km north and east from their modest home on Calle Estadio De Israel to El Coloso del Parque stadium where “El Diego” was about to make his debut for the Old Boys in a friendly against Ecuador‘s Emelec.

Newell’s are the club with the black-and-red quartered strip, which could then boast future Barcelona manager Gerardo “Tata” Martino and future Spurs boss Mauricio Pochettino in their squad. And that October day, with young Leo present, was the only day in which Maradona, with the No. 10 on his back, ever scored for Newell’s.

The 1-0 win, after which he was mobbed by Emelec players begging for his shirt which he wouldn’t hand over because he’d already promised it to Fidel Castro, Cuba’s ruler, came thanks to a goal which, remarkably, Messi replicated with faithful, almost eerie, accuracy against Osasuna this weekend.

Okay, Maradona scored off his right foot; Messi off his left. But just like Messi’s brilliant, reality-defying, half-pitch dribble and goal against Getafe in the 2007 Copa del Rey semifinal was unbelievably evocative of Maradona’s most famous goal, the half-pitch explosive dribble and finish against England at the World Cup in 1986, the creation and finish against Osasuna was as if Messi is genuinely able to decide with pre-meditation: ‘THIS is my tribute to Diego and I’m going to produce an almost identical replica of the only goal he scored for MY team.’

A little slalom between three players and a diagonal drive across the keeper into the far top corner launched from just where the edge of the penalty area meets the semi-circle. Spookily identical, across a 27-year-span, two diminutive Argentinian geniuses running one way, dragging men with them and smashing the ball back in the other direction for a thrilling goal. Twins of mayhem; twins of invention.

When Messi stripped off his Barca shirt to show the presciently prepared Newell’s strip, Maradona’s No. 10 on the back, it added the sensation of: ‘This guy can literally plan and execute things in the midst of this most unpredictable, uncontrollable sport as if it were under his personal control.’

The throwback incident had a little comic postscript when referee Mateu Lahoz, who booked Messi for taking his Barca shirt off, much to Messi’s amused disapproval, recorded the decision in his official report like this: “Messi was booked for taking off his strip, after a goal, to display a modern version of the Newell’s Old Boys 93-94 shirt with the No. 10 on the back.”

There was another quaint, “throwback” element about the Barcelona performance — one which, if taken any further, would also have incurred Lahoz’s wrath.

Just as spoilsport and unnecessary as the rule about booking scorers for whipping their shirt off, is the one about players not being allowed to perform with their socks rolled down. I’m aware that not all the ESPN readers will recall the day when every showman-footballer strutted around with three central characteristics: absolute love and respect for “owning” the ball, strip untucked and hanging down over the shorts plus … socks rolled down around the ankles.

It wasn’t so much an image thing, but an identity statement. Not: “Look at me!” Much more “This is ME! — take me or leave me. I don’t care.” Think of Eric Cantona and his upturned collar.

Pedri’s socks are permanently halfway down his shins, a little gesture of individuality, a throwback identity which is becoming clearer by the week. Barcelona have unearthed a gem.

These guys have to wear shin guards, fine. But the modern nonsense laws would have you booked, sent off and probably put behind bars or exiled to a remote island if the socks aren’t pulled right up to a regulation height.

Pedri, already bettering Messi’s numbers at the same age for Barcelona, goes as far as he dares. He’s one of those kids who you could pluck out of football in 2020 and drop into soccer in the 1960s or ’70s no problem. Shirt and shorts a little baggy on him, droopy socks — your eyes are instantly drawn to him because the ball is his best friend.

And it’s not only that he trots around the pitch intent on getting on the ball as much as a raw teenager in a team full of €100 million players can realistically expect, it’s how Koeman uses him that draws the eye.

First of all, when Messi was 17 turning 18, as Pedri did just a few days ago, the Argentinian, who even then was thought of as a once-in-a-lifetime footballer, was living off biscuit crumbs for minutes. Koeman’s old Netherlands and Ajax teammate Frank Rijkaard used Messi for 70 minutes across seven Liga matches, one full Champions League defeat (to Shakhtar away when Barcelona had already qualified for the knockouts) and 73 minutes of a shock Copa del Rey loss to tiny Gramenet.

At this pretty much identical stage of Pedri’s development, he’s the second most used player for Koeman’s Barcelona in the Champions League (272 minutes across all four games) and in the top 10 of minutes played for the Blaugrana in La Liga (447 minutes across nine matches.) In simple terms, while a complete newbie at a crisis club, Pedri has made more Barcelona appearances this season than any other player with 13.

A little note for the pedantic and too easily excited out there: I’m NOT suggesting that he’s got Messi’s genius or that this beginning automatically means we’ll be seeing him 16 years later at Barcelona having achieved what his Maradona-worshipping captain has achieved. But it is saying while Koeman could be pardoned for fearing that a “kid” might buckle under the pressure, might let him down in what promises to be a single season in his dream job, the hard-nosed Dutchman has placed total faith in the Canary Islander.

That’s right, he’s not a kid from Barcelona’s academy: the “La Masia” school where mould-breakers like Xavi and Andres Iniesta were given a football training bordering on indoctrination with year after year of positional play, passing drills, half-touch controls, and third man moves before hitting the first-team.

Pedri, which is just a shortened way of saying “Pedrito or little Pedro,” is from that remote little clutch of islands some 1,500 miles south of Barcelona. Not only does he not share the tactical and technical inheritance of those who went before him in this club, Messi, Victor Valdes, Iniesta, Xavi, Pedro, Gerard Pique or Sergio Busquets, all of whom racked up tens of thousands of hours of in-house tuition, Pedri was brought up in the tiny town of Tegueste in Santa Cruz de Tenerife.

Think of it like this: he was on a lateral line with Jacksonville — Barcelona lines up with Quebec. Same country, but worlds apart.

Nevertheless, the shimmer of alluring mystery around this 24-karat footballer grows with his recent revelation that Real Madrid spotted him first, took him to their Valdebebas training ground for a week and then, in a kindly enough manner, told him he didn’t have the “right” stuff for them.

“I’d like to thank whoever made that decision because I’ve always loved Barca and I’ve seen myself more in tune with how Iniesta played than anyone else,” Pedri revealed on radio recently. I know that the history of our sport is littered with “how did he get away” stories where clubs have failed to spot a shimmering diamond right under their noses, but this one is a corker.

Against this remarkable backdrop, it’s not merely that Koeman sees Pedri, a teenager and in his debut season at a deeply troubled giant club, as having the right maturity or the right technical skills. There’s more. The Dutchman, so far, has played Pedri at left wing, right wing, No. 10, briefly, at centre-forward, attacking midfielder and then, the coup de grace, at “pivote” in a two-man defensive shield during the first half against Osasuna.

Again, all of this is just remarkable, branding Koeman as somewhere between a visionary and a rank gambler and marking Pedri out as a junior phenomenon. But please, take account of the startling context.

Some judges called Barcelona’s formation 4-3-3 on Sunday, but it wasn’t. Coutinho played many metres farther forward than Frenkie de Jong and Pedri in the first half, that was clear to the naked eye and heatmaps irrefutably confirmed it by the end. So De Jong, who still felt free to surge forward in attack, to play wide if the team needed width, was the senior “pivote” midfielder, being protected and urged forward by this imp of an 18-year-old.

And what a delight Pedri was to watch. He moved the ball sharply and simply, he set a nice, creative tempo. When full-backs needed protecting, he anticipated and raced into the right position to help stifle danger. Lots and lots of no touch control, letting the ball roll across the front of his body shape so that he was on the move before a one or two-touch onwards pass. Hallelujah. It was a masterclass made all the more remarkable by his age, experience, the weight of responsibility and, above all, the queue of players over which he vaulted.

All season, whether in 4-2-3-1 or 4-4-2, Koeman has sought to have stability and control around De Jong with what the Spaniards call a “double-pivot.” Usually Busquets or Miralem Pjanic alongside the improving Dutch midfielder but, last Champions League midweek, Carles Alena played there too and came in for specific praise from Koeman after the huge win in Kiev.

Yet Koeman left all three of them on the bench and moved Pedri back into a right-sided, two-man central midfield instead of using this kid, who is patently his favourite player, in any of his normal, preferred, attacking positions.

Pedri will encounter spells this season where it’s vital he rests for a few matches, and he’ll go through bumpy moments when form droops or mistakes get highlighted. That’s life. But I suspect we are watching the birth of a phenomenon… which must make many other clubs around Europe green with envy.

As the greatest phenomenon in Barcelona’s history uses the next few weeks to consider whether it’s time for him to bow out of his Barcelona career, as clubs queue up to try and tempt Messi to join them for nothing in June, it already seemed remarkable that this deeply troubled club has unearthed a record-breaking, jaw-dropping talent like Ansu Fati, who’ll be back in business in the spring after injury and, himself, is only 18.

Then throw in this socks-rolled-down throwback, for whom the ball is a treasured personal possession and for whom the normal threats of a senior responsibility at a mega-club at such a tender age seem to have been just so much chaff in the wind, and there’s no question: Barcelona cannot possibly complain if Messi waves adios and moves to pastures new in the summer.

To find one potential “successor” to fill the void is quite remarkable. To possess two of them, the younger of whom was rejected by the Catalan club’s biggest rivals as not good enough, well that is nothing less than astonishing.