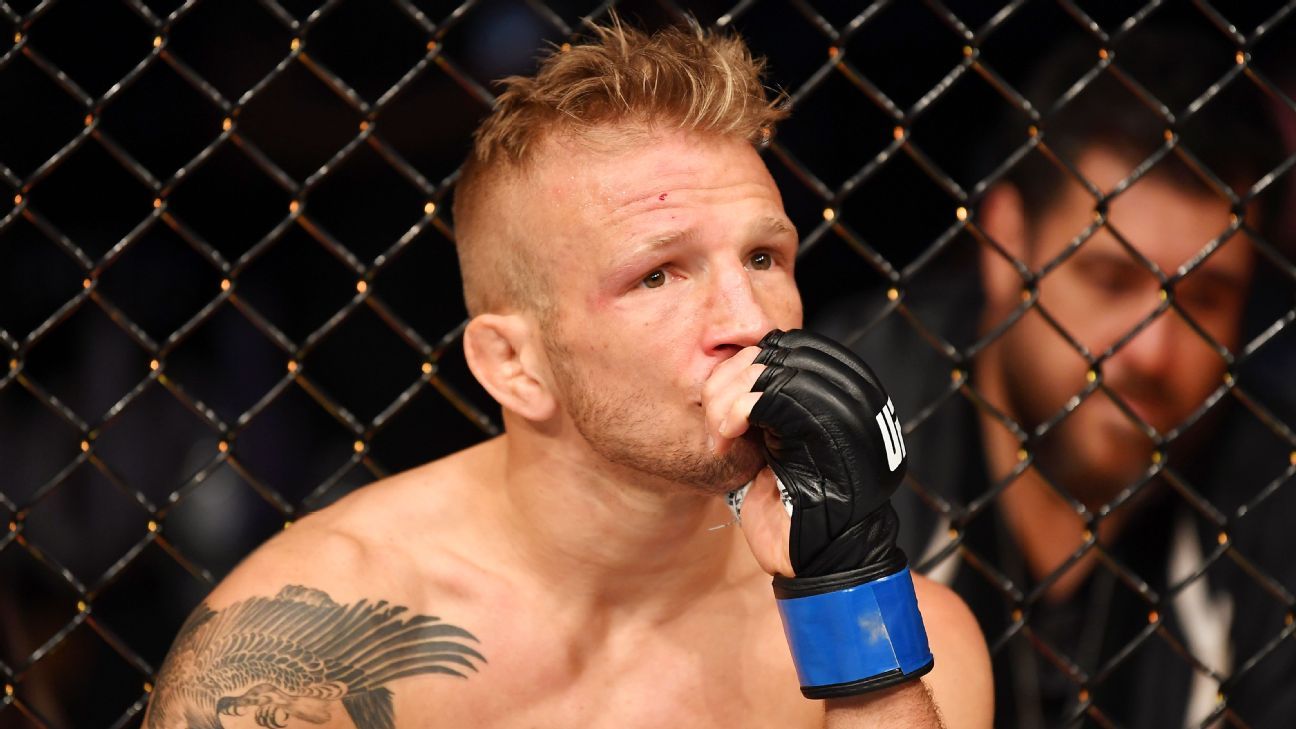 Former UFC champion TJ Dillashaw surrendered his 135-pound title in 2019 due to a two-year doping suspension, not a loss. Now that the suspension is nearly over, he believes he should get an immediate shot at regaining the belt he never actually lost in competition.

Dillashaw (16-4) was suspended by the United States Anti-Doping Agency for two years, after testing positive for recombinant human erythropoietin (EPO) prior to a flyweight title fight against Henry Cejudo in January 2019. The suspension is set to end on Jan. 18, 2021.

In Dillashaw’s absence, Cejudo claimed the vacant bantamweight title, defended it once and retired. That left the title vacant again, until Petr Yan beat Jose Aldo to win the belt in July. In Dillashaw’s eyes, it all adds up to a division without a real champion.

“I want that title fight right away,” Dillashaw told ESPN. “You’ve got a guy in Petr Yan who beat someone for the belt that is 0-2 in the division. Jose Aldo has two losses [at 135 pounds]; you beat him for the title and you’re calling yourself a champion? That belt has changed hands every fight. No one there has dominated. That’s my belt, and I want to come back to a title fight.”

Yan (15-1) was supposed to defend the belt against Aljamain Sterling (19-3) at UFC 256 this month, but the bout has been pushed back to an unknown date in 2021. Although Dillashaw is free to come off suspension on Jan. 18, he said he would like to enjoy the holidays with his young son and fight sometime around March, preferably against the winner between Yan and Sterling.

Dillashaw, 34, said he would be open to fighting highly ranked contender Cory Sandhagen (13-2), who has expressed interest in fighting him. Dillashaw said he is less interested in a potential fight against former teammate-turned-rival Urijah Faber. Dillashaw and Faber had a falling out in 2015, and the possibility of a fight between them has existed ever since.

Dillashaw said he isn’t expecting a warm reception from fans, after admitting he knowingly took the banned substance in 2019. Dillashaw was dropping to 125 pounds for the first time in his career for that fight, and he said he took EPO as a desperate measure when his body started to give out while cutting the weight during camp.

“I’ll be a three-time bantamweight champion,” Dillashaw said. “That’s a guarantee, and it’s going to happen sooner than people think.”